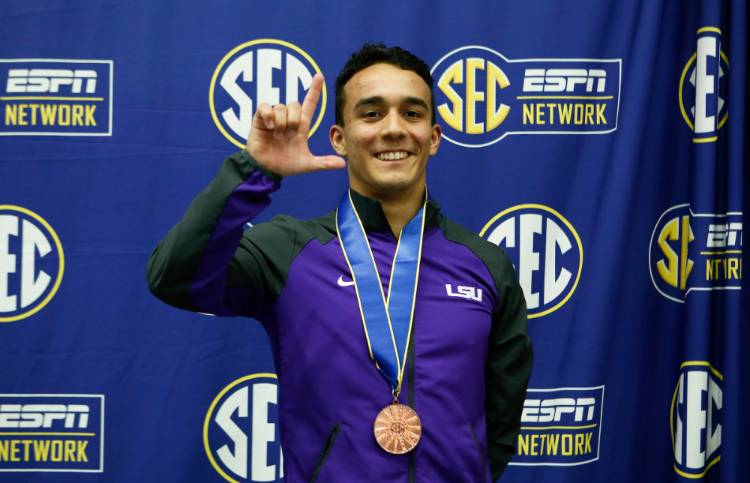 BATON ROUGE, LA – If all goes according to plan over the next several months, civil engineering major Juan Celaya-Hernandez will spend part of his summer in Tokyo. Not on a study abroad trip, but rather as a member of Mexico’s Olympic team.

Last summer, Celaya-Hernandez, a standout on the LSU Swimming & Diving team, won bronze at the FINA World Championships in South Korea with his partner Yahel Castillo in the 3-meter synchronized dive. Later in the year, the pair won gold in the same event at the Pan American Games in Peru, where Celaya-Hernandez also won gold in the 1m springboard and silver in the 3m springboard

It was the perfect end to a year that saw him win 18 of 24 events, win gold and bronze medals at the SEC Swimming and Diving Championships, and be named an NCAA All-American.

But the two biggest events are yet to come—the FINA World Cup in Tokyo in April and the Olympic Diving Trials in June in Mexico City—before Celaya-Hernandez can officially pack his trunks for the 2020 Summer Olympics.

“Deciding to make a run for the Olympics didn’t come last year, nor the year before,” Celaya-Hernandez said. “This has been my dream since I was 9 years old and I’ve been working really hard my whole career to accomplish that dream. The dream of any elite athlete, wearing the flag of your country at the biggest athletic event, which less than 1% of the world’s population can go … A dream of little Juan can come true.”

“Diving is not just a sport, it’s my way of life,” Celaya-Hernandez said. “I’ve always been a really passionate athlete, always trying to achieve more. I’d say I still have ways to go in this sport but I’m really happy with what I’ve done so far…not satisfied.”