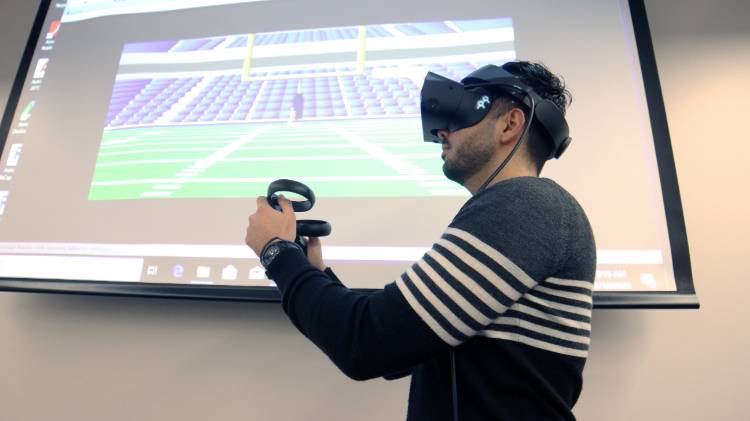 BATON ROUGE, LA – It has been said that it is impossible to recreate the atmosphere of LSU’s Tiger Stadium on a Saturday night. In the very near future, however, that won’t be entirely true.

A team of graduate students in LSU’s Digital Media Arts & Engineering and Kinesiology programs are working alongside faculty, as well as LSU Football athletic training staff, to create a virtual environment that allows athletes to develop their skills in a game-like environment.

“In the virtual environment, the user will be in Tiger Stadium with a full crowd and full crowd noise,” said Kelley Burger, kinesiology PhD student and team lead on the project. “We hope to even have settings to mimic an 11 a.m. game with full daylight versus a 7 p.m. game with stadium lighting. We have been in constant communication with [LSU Football] on what they want the program to look like for their wide receivers, for their quarterbacks, for their linebackers, etc. This will not be some stock program. It will be very LSU-specific.

“We landed on the idea of starting with the wide receivers and creating a game for them where we have one of our quarterbacks throwing footballs at them in Tiger Stadium. With this, we hope that our receivers can get a lot more looks at the football, even without a quarterback, equipment, or a facility.”

The group hopes to have something ready for the LSU receivers to use by March. It would then spend the rest of the semester improving upon the technology and enhancing the visuals with increasingly difficult tasks.

Burger, who is mentored by Kinesiology Assistant Professors Marc Dalecki and Nikita Kuznetsov, said she got the idea for the project while working part-time in sports training as she pursued her master’s. She realized the difficulty in replicating game-like environments when working one-on-one with athletes outside of the gym or field. The issue she faced, however, was how to turn this idea into reality?

“Basically, everybody up to that point had been telling me it wasn’t feasible because the program I was thinking of making required skills way above what I learned during my master’s,” Burger said. “It was then when I decided, ‘Hey, every campus has computer programming students and experts, so let’s reach out to them.’ I contacted Marc Aubanel (director of the DMAE program) and he was the one that set me up with this group of grad students [in DMAE]. That is when all of the magic happened.

“By being able to create a whole virtual world, athletes could get more repetitions in and we could make these extra repetitions as meaningful as possible by taking the time to make it feel as real as possible.”

Therein lies the challenge. Currently, the team is rendering the stadium with photogrammetry techniques, which involves taking existing pictures and video of the stadium to use for measurements in the virtual world. It’s also working with Alison Burkley, LSU Digital Media Arts & Engineering instructor, to obtain 3D scans of a football, LSU’s uniforms and equipment, and one of the quarterbacks.

“[The team] will use photogrammetry to replicate all of these features exactly so the receiver will see exactly what he sees on gameday,” Burger said. “During the session with the quarterback, we took some recordings of his throwing motion in the biomechanics lab on campus, so [his] throwing mechanics will be replicated accurately in the game as well. Lastly, we are using a technology called Leap Motion that will be mounted onto the virtual reality headset and allow the user to see [his or her] own hands while playing.”

Over the next year or so, the group hopes to develop this project further by expanding it to other positions and other sports.

“We hope to make more versions of this project for other positions on the football team and for other sports, such as tennis and soccer,” Burger said. “We hope to have all the features for the wide receiver game completely done by the end of the semester. Then we have to take that functionality and translate it to other positions and other sports. That will probably take another year, at least, to get the other versions complete.”

“None of us could complete this project without the support of the athletic department, specifically the athletic training team,” Burger said. “I should also acknowledge Chauncey Frend and Skyler Stevens, who helped in the creation of the first version of the game.”