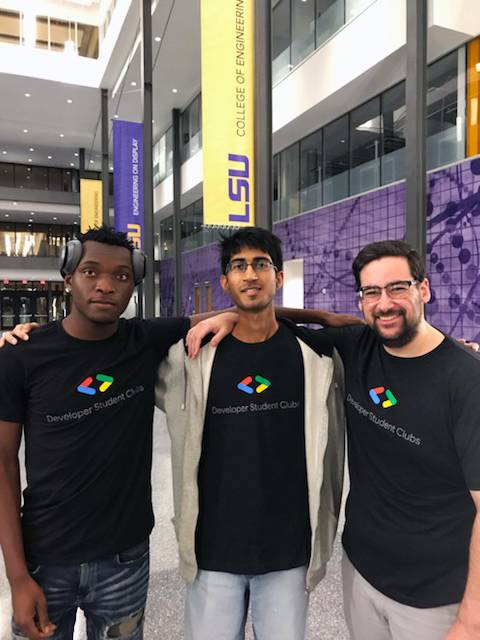 BATON ROUGE, LA – Despite being more than 7,000 miles from home and only a sophomore, LSU Computer Science major Rohan Kadkol has found his niche and is already making an impact in his short time in Baton Rouge.

Near the end of his freshman year, Kadkol was selected by Google to lead the Google Developer Student Club on campus. The club, which Google initially installed at hundreds of universities across Asia, is in its first year both at LSU and a number of other universities in North America. According to Google, the club aims to help students, “grow their knowledge in a peer-to-peer learning environment and build solutions for local businesses and their community.”

Google DSC is almost entirely self-taught and self-funded, with Google only providing some PowerPoints and access to online training courses for new members.

“We find what the pain point is in the community, what people are fed up with, and what needs to be solved. Then, we try to build the tech solution using the knowledge we have and try to solve that problem,” Kadkol said.

In each fall semester workshop, of which there were three per week, Kadkol and his team developed an idea for an app. They worked on smaller scale apps during Monday and Wednesday workshops, with a more professional app on Fridays.

Additionally, Kadkol said they will try to focus only on topics that aren’t taught in the classroom at LSU to give members a wider skillset.

Born in India but raised in Kuwait, Kadkol is a perfect fit to lead the Google DSC at LSU because of his expertise in, and passion for, software development. Kadkol spent his Fridays in the fall strictly writing code for the apps they created, a talent instilled in him from a very young age in Kuwait.

“My programming interest actually started with my father,” Kadkol said. “When I was in second or third grade, he taught me programming and helped me build a calculator. That’s when I knew I really loved it. I had to make buttons for it and had to write the code, which was so amazing and cool to me at the time.”

Also during his youth years, Kadkol developed a ticketing system in which people could theoretically enter their flight information before seeing a, “your ticket is booked,” message with a confirmation number.

Since Kadkol applied and was accepted to lead the club at LSU last year, his focus for this semester and beyond is to expand and enhance upon the foundation of what has already been established with the club. He said there are currently 10-15 students who attend workshops regularly. He wants that number to near 100 by the end of this semester.

“I’m really focusing on promoting this because this is something that can be very important for CS students to have experience with once they graduate,” Kadkol said.

As an enhancement of what’s already in place with Google DSC, Kadkol foresees tech companies and employers making their way to workshops in the spring 2020 semester and beyond.

“We’re going to have big industry people in the tech field come and give speeches,” Kadkol said. “In the beginning of workshops, we’d like to have guest speakers and have time to interact with them after, which is important. You need to get motivated by talking to these people in the industry to see what’s going on.”

“For small businesses, they’re already running short on money and resources, so we can come in and help them for free and that’s another way we want to help the community,” Kadkol said.

The sophomore is hoping his passion in mobile application development will encourage other like-minded students to join the Google DSC at LSU.

“The LSU Computer Science program offers very good classes, but this (Android development) is something else that you can do once you start working,” Kadkol said. “Computer science majors may have never considered doing something like this before, but this is absolutely something you should do if you’re a computer science major. I just want to promote this kind of skill that isn’t necessarily taught in the classroom.”