The Road Less Traveled: LSU ME Senior to Run 125 Miles for ALS Benefit 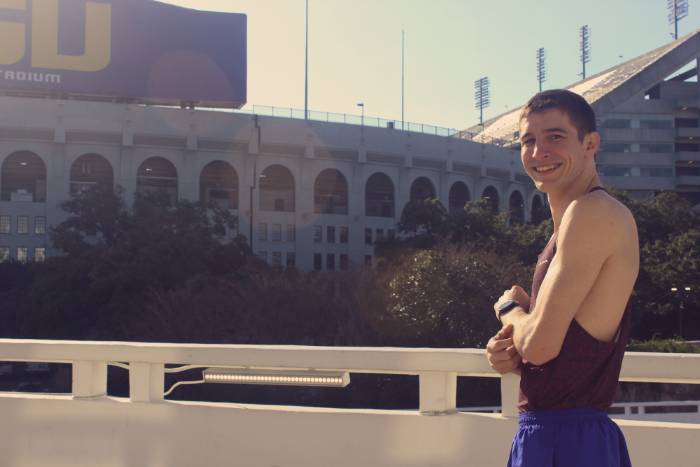 BATON ROUGE, LA – While most people will go back to work with a more padded midsection on Jan. 9, LSU Mechanical Engineering senior Dante’ Hebert will begin a 125-mile solo run along the Mississippi River levee, from Tiger Stadium to the Mercedes Benz Superdome. The five-day journey from Baton Rouge to New Orleans is intended to raise awareness and funding for the Steve Gleason Foundation, which strives to find a cure for ALS, or amyotrophic lateral sclerosis.

Hebert, a native of Lafayette, La., was inspired to do the run after seeing his mom battle breast cancer this past year.

“Earlier this year, my mom was diagnosed with breast cancer and went through multiple surgeries,” Hebert said. “She’s now on the road to recovery but it was a wakeup call for me and my family. It inspired me to do something meaningful my final year at LSU. I decided to run for the Steve Gleason Foundation as a way of giving back.”

Hebert’s mom will be there to see her son off on the first day of the run, which happens to be her birthday. The run will end at the Superdome on Jan. 13, the day and location of the College Football Playoff National Championship.

“Gleason’s story inspired me to give the playoffs more meaning since he did not give up when facing adversity,” Hebert said.

Hebert, who was a wrestler at Teurlings Catholic High School in Lafayette, only began running two years ago. Since then, he has completed one marathon in San Francisco, which he finished in four hours.

“I love running,” he said. “I can just get away from everything—no phone or headphones. This is the first time I have done something of this nature. I have completed a marathon, but this is a different beast.”

Hebert will space out his run by doing 25 miles each of the five days, which almost equates to a marathon per day. He will wake up each morning and eat two cups of plain white rice, then start running on the levee around 9 a.m. A support team of friends and his twin brother, Dakota, will cycle alongside Hebert for the back half of each run to provide water and snacks as needed.

As for sleeping arrangements, Hebert is hoping to borrow a camper and have a driver park it at the final location each day.

“This will be an integral part for recovery,” he said.

Hebert is not the first LSU graduate to do this run. In 2014, LSU alumnus Louis Mykoff ran the same path and distance, calling it the Red Crescent Run. In his three years of doing the run, Mykoff raised more than $40,000 for the Steve Gleason Foundation.

After hearing about the Red Crescent Run, Hebert reached out to Mykoff for advice.

“I told him you have to put your life on hold for this,” Mykoff said. “It’s nothing but school, work, running and raising money. It’s brutal. The hardest part is running on the huge rocks. I suggested he should do 30 miles on the first day and go down from there.”

While planning his run, Hebert has continued his ME studies alongside Dakota, who is also an ME senior.

“ME was something we were both interested in,” Hebert said. “We didn’t plan to major in the same field and take the same classes. ME is just something we can really see ourselves doing down the road.”

Hebert, who graduates in May, hopes to go into the self-driving industry in California or Michigan, since he will have a minor in robotics.

During the holiday break, however, Hebert is preparing for his long journey and hopes to raise more money for his cause.

“My goal is to raise $5,000 for Team Gleason,” Hebert said. “I want to be a part of something bigger than me. I want to show my family, friends and anyone else who hears about my run that ordinary people can make a difference.”

Donate to Hebert’s run by clicking this link.