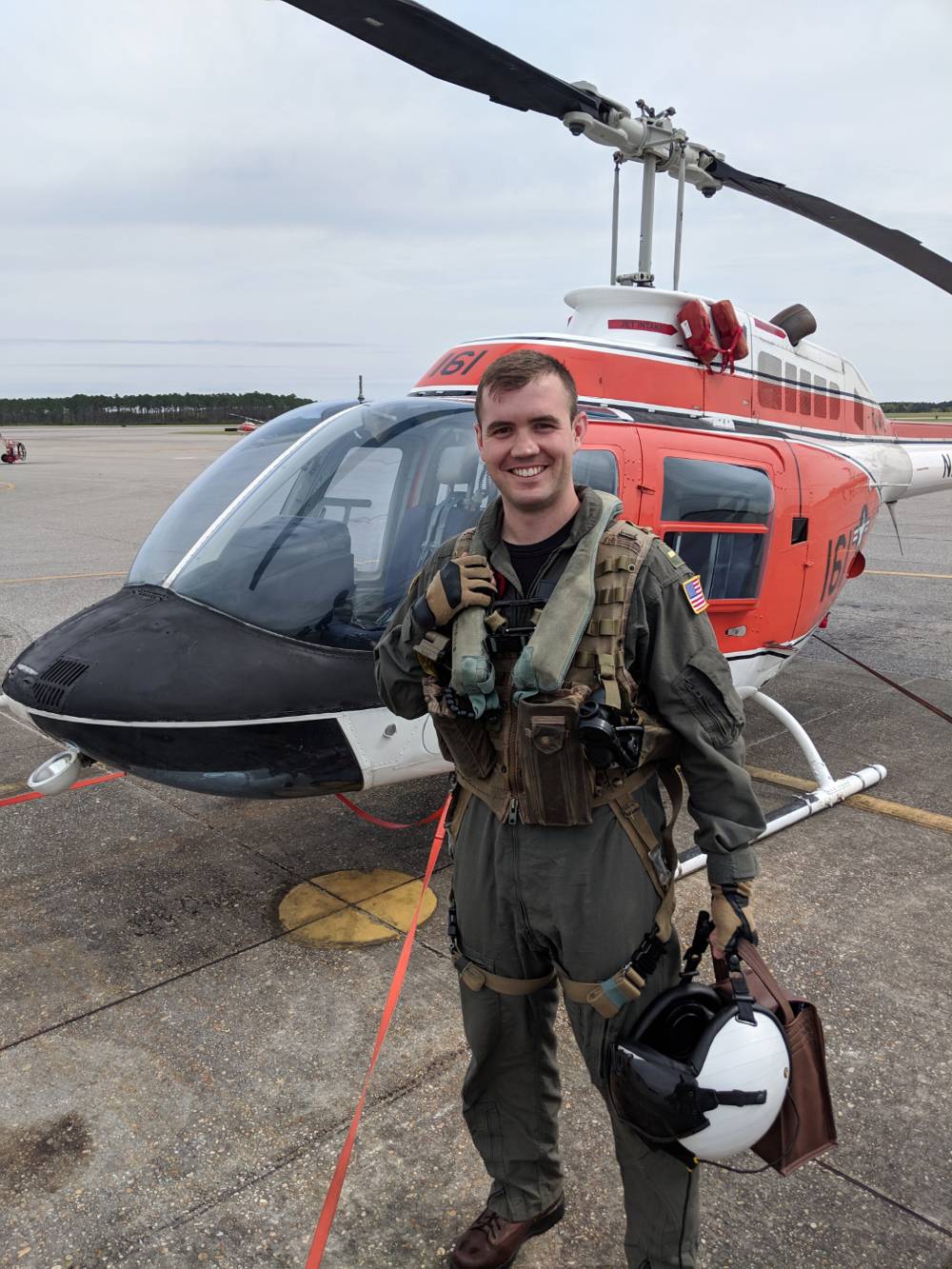 BATON ROUGE, LA – Most people can say they have driven a car since the age of 16. LSU Industrial Engineering alumnus Christopher Dedo can say the same—about flying a plane. Dedo, who graduated in 2017, recently received his “Wings of Gold” in the U.S. Navy and will begin his first assignment as a helicopter pilot in San Diego this month.

“My goal since high school was to become a naval aviator,” Dedo, a Lafayette, La., native said. “Now that I’ve achieved that, it’s about seeing what’s in store next.”

Dedo’s interest in flying began in high school, though his dad’s passion for aviation was influential. There was also a small 1980s film that may have contributed to his aerial pursuit.

“I won’t say ‘Top Gun’ was the sole reason, but it was a motivation,” he said.

Dedo started civilian flight school at New Iberia Regional Airport between his sophomore and junior years at St. Thomas More High School. He spent two summers earning the mandated 40 hours of flight time under the instruction of Robert Viator and Ryan Owens. While he had an instructor fly with him in the beginning, Dedo was soon able to fly solo, which consisted of three takeoffs and landings on his own. The next step was cross-country flights, in which he flew to different airports all over Louisiana while learning to navigate and fly in bad weather. Dedo earned his civilian private pilot license the summer before his senior year at the age of 17, and his first passenger was his proud mother, whom he credits as his greatest supporter since day one.

“The next step was the military, so I looked into my options by asking as many military aviators as I could, and Navy ROTC ended up making the most sense for me while also giving me the opportunity to attend LSU,” Dedo said.

As a freshman, Dedo joined the Navy’s Red Stick Battalion through the LSU Corps of Cadets and received a four-year national scholarship that covered all tuition. During his senior year, he was to be selected for the area of the Navy he would join—submarines, surface warfare (ship), or aviation.

“I wanted aviation,” he said. “It’s pretty competitive, so it helped that I already had my license and was an engineering major, but timing is critical in the military and I was lucky enough to be selected.”

After graduation, Dedo was a recruiting officer at LSU and was then stationed in Pensacola, Fla., where he spent two months completing Aviation Pre-Flight Indoctrination (API).

“I learned how jet engines work, how weather works, and also took several survival classes—ejection seat training, how to escape an aircraft underwater, and the basics of how to survive in the wilderness,” Dedo said. “At that point, you earn your flight suit and can call yourself a student pilot.”

Dedo credits his engineering classes at LSU with helping him through training.

“An engineering background is incredibly valuable in flight school,” he said. “At the beginning, we learn physics all over again, aviation-style, and that’s pretty intense. How systems operate together is something I learned in IE that helps me as a pilot—how you prioritize and triage when things are going wrong. In an emergency, you need to know why that emergency is happening so you know what to do to safely recover the aircraft and not make the situation worse. There’s no doubt that this training has saved countless lives in naval aviation.”

After API, Dedo began Primary Flight School, where training is split between Milton and Corpus Christi, Texas. He went to Corpus Christi for one year and he flew the T-6B Texan II as part of the Rangers of Training Squadron 28 (VT-28).

“That’s where we learn to fly a military aircraft in controlled airspace, in bad weather, in formation, and in aerobatic maneuvers while also training for emergency procedures at every stage,” he said. “It’s what I learned as a civilian but at a much higher level.”

After completing Primary, Dedo selected what he wanted to fly in the Navy. The options were jets, helicopters or maritime patrol. He was selected for helicopters and went back to Florida to train at Naval Air Station Whiting Field, where he did Advanced Rotary Training in the TH-57 Bell Jet Ranger helicopter for seven months. During this time, Dedo was part of Helicopter Training Squadron 18, the Vigilant Eagles (HT-18).

“Throughout flight school, everyone always says that you’re going to love whatever you end up flying,” he said. “I can attest to that because I’ve never had more fun in the air than I have flying helicopters.”

Seven years to the date from when he received his civilian pilot license, Dedo finally earned his “Wings of Gold” on August 9, 2019.

“Once you get your wings, you’re qualified as a naval aviator, which is what we all work toward,” he said. “Up to this point, we’ve only been student aviators. It’s been two years of fun but definitely a lot of work and stress.”

Dedo just moved from Milton, Fla., to San Diego, where he will live for the next four years. He will spend his first year training on the MH-60 Sierra Seahawk as part of the Fleet Replenishment Squadron (FRS) at Naval Air Station North Island, where he will learn to fly missions and effectively utilize the weapons systems and crew. The following three years will be operational, meaning he will be on a deployment cycle in the Pacific Fleet.

“Depending on my assignment out of the FRS, I could be on an aircraft carrier deploying as a whole squadron, or on a smaller expeditionary ship that has helicopter capabilities with only a detachment from the larger squadron,” Dedo said. “Either way, our job will be to support the fleet wherever the Navy sends us in the world. The Navy is the first one to react since we’re already out there on the ocean, but the time away from home is definitely a sacrifice for the families.”

This is something Dedo will soon know about since he is newly engaged (to an LSU graduate), with a wedding planned for May 2020. As for all of his accomplishments since graduation, Dedo said, “It’s exciting. It’s been this goal for so long and now it’s real. I’m living it.”