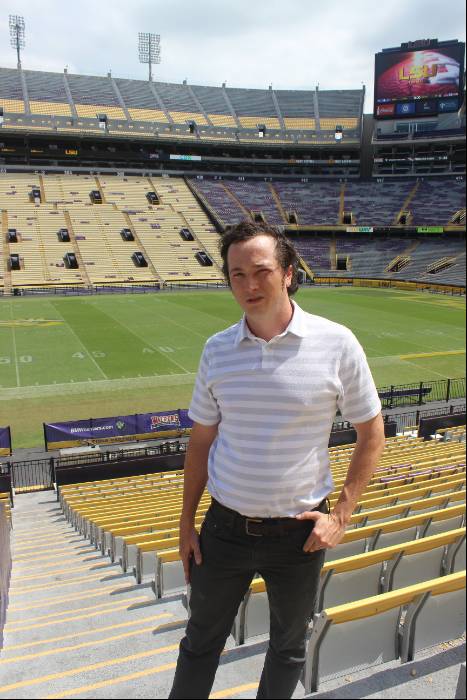 BATON ROUGE, LA – When LSU Biological Engineering alumnus Danny Dehon began working in coastal restoration, he never dreamed that it would land him back where he started—LSU’s campus. And Dehon certainly never dreamed the land he’d be working to save would be the one inside Tiger Stadium.

Born and raised in New Orleans, Dehon came to LSU in 2003, majoring in biological sciences before switching to biological engineering his sophomore year.

“I had a strong math and biology background in high school and felt that BE was a good merger of the two,” he said. “Growing up in South Louisiana, fishing with my family and being out on the water was something I loved to do, so I wanted to focus on coastal engineering.”

After earning his bachelor’s in 2008, Dehon remained at LSU and earned his master’s in BE. Immediately after graduating, he worked as a field scientist for a British Petroleum (BP) contractor, Cardno, alongside a team of four scientists and boat operators to track submerged oil throughout the Gulf of Mexico.

“We were stationed in different cities between Louisiana and Florida for two to three weeks, then would go home to get our next assignment,” Dehon said. “I wasn’t really utilizing my degree, but I stayed for six months.”

He then reconnected with fellow BE graduate Tyler Ortego, who had started his own company, Ora Engineering. Dehon followed up Ortego’s research on artificial oysteries, a technology Ortego had taken to the commercial scale.

“I worked with him on engineering design for nearly three years, working out of my house and also in the field,” Dehon said.

In 2013, Dehon began working for Manchac Consulting Group, where he served as a coastal engineer on all of the company’s coastal projects, which included marsh creation, bank stabilization, artificial reefs, island construction, and sediment transport. The most exciting project, however, came when the company got a contract to work on drainage in LSU’s Tiger Stadium.

“I started working with LSU 18 months ago and worked with a landscape architect who has done a number of SEC fields,” Dehon said. “So, he was the guy I leaned on for the irrigation and the under-drain system out there. I could take care of drainage on the sidelines, concrete work, and civil site work, and adding drainage capacity.”

Dehon credits LSU BE Professor Marybeth Lima’s Community Playground Project for helping him with his work on a daily basis.

“Dr. Lima is awesome,” he said. “One of the big things most people take away from her class is the work you get to do on the playground projects. It’s very fulfilling. Looking back, it’s very applicable to working with building standards and design and working with a client and going through a design process on a project.”

Though Dehon has recently accepted a new position with Fenstermaker & Associates, an engineering consulting firm in Baton Rouge, the excitement of working on the field in Tiger Stadium will be hard to top.

“I had goosebumps the first few times I was out there,” he said. “Being out there at the field level really puts things into perspective. I couldn’t imagine being out there on the field during a game with 100,000 fans. I’ve been an LSU fan even before I went there and have memories of watching some great games.”

The next time the Tigers play in the rain and aren’t treading water to run the ball, LSU fans know who to thank.