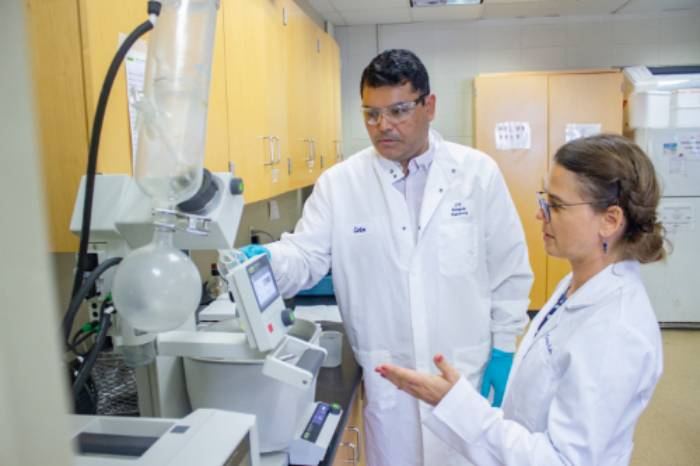 Thanks to a $200,495 Louisiana Board of Regents grant and $50,000 LIFT2 grant, the pair is developing an alternative treatment for PAD using a nanoparticle delivery system and nontoxic polyphenols that will give patients better options for PAD treatment with possibly fewer side effects. Current procedures for treating PAD, a circulatory problem in which narrowed arteries reduce blood flow to limbs, can have harsh side effects and don’t always have a real impact on improving its symptoms.

Wanting to develop a harmless and more effective treatment, Dugas discovered two drugs to treat PAD—resveratrol and quercetin. Both of these are found in red wine, have beneficial effects on cells within arteries, and promote healing of the vessel wall, presumably without the unwanted side effects associated with other drugs used in PAD therapies. Dugas and Sabliov’s goal in treating PAD is to use drugs that don’t destroy cells but rather keep them from growing and narrowing an artery without the use of a stent.

“Dr. Dugas discovered that these two drugs in combination worked well for that purpose,” Sabliov said. “She found the right potion, but she wanted the drugs released over time, and for that, she needed a smart delivery system.”

Knowing of Sabliov’s experience working on nano-delivery, Dugas asked her to create a nanoparticle containing both drugs to serve as that delivery system.

“To be able to do that, Assistant Research Professor Carlos Astete and myself loaded these drugs into a nanoparticle” Sabliov said. “Nanoparticles are really, really small—only 100-200 nanometers (nm). In comparison, a hair is 70,000 nm thick.”

The way in which the drug would be administered is similar to angioplasty, where currently, doctors insert a drug-coated balloon (DCB) attached to a catheter into the narrowed vessel and inflate the balloon to expand the blood vessel and improve blood flow. The balloon releases a drug called paclitaxel to slow the growth of cells on the vessel walls where applied. The problem with this is that paclitaxel, which is also used as a breast cancer chemotherapy agent due to its ability to slow the growth of cancer cells, can actually reduce the proper healing of the vessel. Stents that are typically applied within arteries of the heart are relatively ineffective in PAD and are sometimes associated with a risk of breakage, particularly when placed where the leg bends.

“There are places where the stent is not suitable,” Sabliov said. “You can’t have a stent in the part of the leg that bends. You want that artery to stay open, but without the stent, so what do you do? With these new drugs, they stop the artery cells from growing back and causing the artery to re-narrow.”

Sabliov and Dugas will develop a DCB therapy in which the red wine compounds are evenly sprayed on the outside of the balloon in a nanoparticle form that will hopefully adhere to the vessel walls, release the drug, and prevent the cells from growing to narrow the vessel and restrict the blood flow. Therefore, a stent should not be needed once the balloon is removed.

“The whole procedure takes only a few minutes, so we need to make sure the particles are released from the balloon very quickly,” Sabliov said.

Though the idea sounds foolproof, the devil is in the details.

“We have some challenges because, number one, you want the drugs released over time,” Sabliov said. “And number two, the two different chemicals have to be in the optimum ratio that she [Dugas] finds works best.”

Some objectives of the project were for the particle to be less than 300 nm, spherical, have a positive charge, and release the drug loaded at 1:2 molar ratio (quercetin:resveratrol) over a period of 14 days.

“If they have a positive charge, then they attach quickly to the cells,” Sabliov said. “The ratio must be 1:2 because that’s the magic potion that will make the drugs effective. We didn’t want the drugs to kill the cells. We just wanted them to prevent the cells from growing back.”

Getting the particles to be of identical size is also part of the plan. If the particles are of varying size, it will affect the release time. Once this is worked out, the next step is putting the particles on the balloon. The coating method is done with an electrospray that uses a syringe filled with the drug-coated particles. As the inflated balloon rotates on a rod, the syringe sprays and covers all sides of the balloon within a matter of minutes.

“If you take the balloon and just dip it in the nanoparticle solution, it doesn’t work,” Sabliov said. “We want uniform particle covering of the balloon. We just need to optimize it—how long you spray, from how far, how quickly the balloon rotates, etc.”

The project is set to be completed by 2019, with hopes that it will be used to treat both animals and humans in the future.

“I just emailed them to let them know we were published,” she said. “When you work on something for so many years, and it finally publishes, it’s a big deal for all of us. I’m so proud of them.”