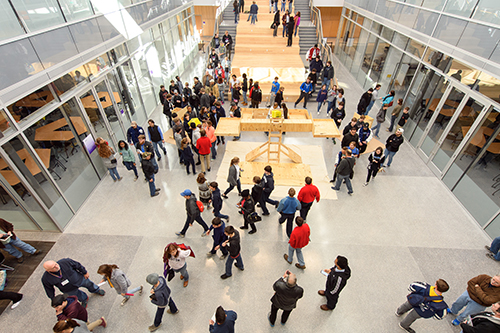 The FRC Kickoff is an international event touted as the “ultimate sport for the mind.” Teams of high school students all over the world are given six weeks to build and program an industrial-size robot using only a “Kit of Parts.” The robots then compete against one another in field games. The challenge not only helps students hone their teamwork skills but also sharpen their engineering talents. Volunteer professional mentors are allowed to assist the teams.

The kickoff – under this year’s theme of FIRST Power Up – marks the beginning of the design and build season, allowing teams to compare notes, get ideas, and most importantly, pick up the Kickoff Kit. Baton Rouge-area students picked up their kits in the LSU College of Engineering and returned to their school’s team base to start their projects.

Each FRC season culminates with district and regional events where qualifying teams compete for awards and a spot at the FRC Championship, which takes place April 18-21 in Houston and April 25-28 in Detroit. More than 3,600 teams comprised of 90,000 students and their adult mentors are taking part in this year’s competition.

The FRC is one of four robotics competitions, the other three being FIRST LEGO League Jr. for ages 6-10; FIRST LEGO League for ages 9-14; and the FIRST Tech Challenge for grades 7-12.
FIRST (For Inspiration and Recognition of Science and Technology) is a 501(c)(3) nonprofit founded in 1989 to inspire young people’s interest and participation in science and technology.