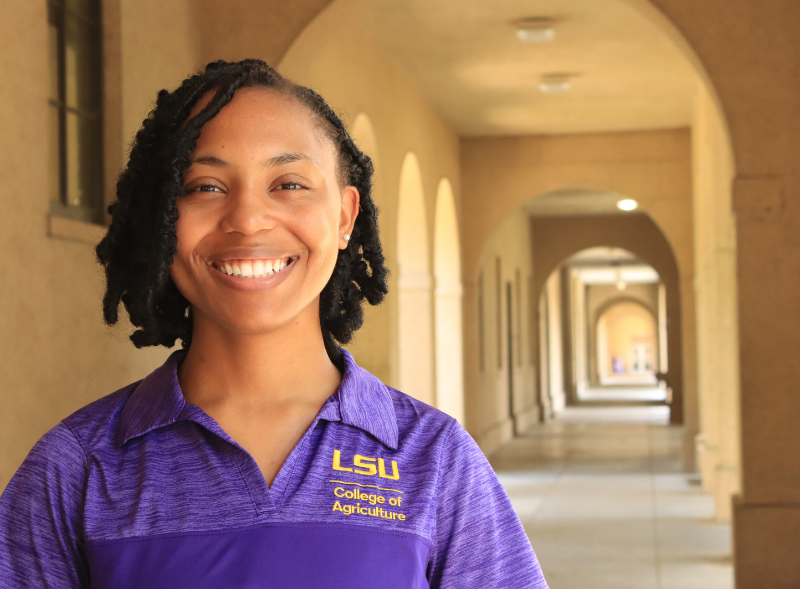 Benton strives to empower other Black women and minority students on LSU’s campus, having spent her collegiate career being involved as a leader in student organizations.

In addition to ASA, she serves as a co-chair of the Black Women’s Empowerment Initiative. The organization strives to promote, maintain and advance the well-being of Black women at LSU.

Benton was previously the president of the LSU chapter of Minorities in Agriculture, Natural Resources and Related Sciences (MANRRS). Under her leadership, MANRRS grew from five active members to 23.

Benton says she knew she wanted to run for ASA president after spending the last two years serving as a peer mentor and working closely with the college’s recruitment and retention team. She was able to work directly with the assistant dean of recruitment and student development, Amanda Martin.

“She really showed me what it means to be selfless and how you can care for those around you,” Benton said. “My eyes were opened to all the students who may have felt unheard or unaccommodated when it comes to being a student here at LSU, especially those who are a part of underrepresented groups. I ran to be the voice of those exact people and those who need a person to advocate for them in their college years.”

Benton says that being the first Black female president makes her feel joyful to be able to pave the way for other students.

“I am proud to be a figure for people to look up to, such as those who may not have ever believed someone who looks like them could be as involved and fight for them like I have been doing and will continue to do,” Benton said.

Throughout her time as ASA president, Benton hopes to develop new traditions, events and initiatives for College of Agriculture students. She is looking to open a student lounge so students have a place close to the dean’s staff where they can easily have access to the resources available to them.

“We are planning to have a Cajun carnival for our welcome week. I am so excited to be able to finally interact with students after such a tough year of adjusting to COVID and all of the hardships both in and out of the LSU community,” she said.

Benton says that she also hopes to start a new tradition of having an annual College of Agriculture Gale where students, staff, faculty, administrators and organizations are recognized for their efforts and hard work.