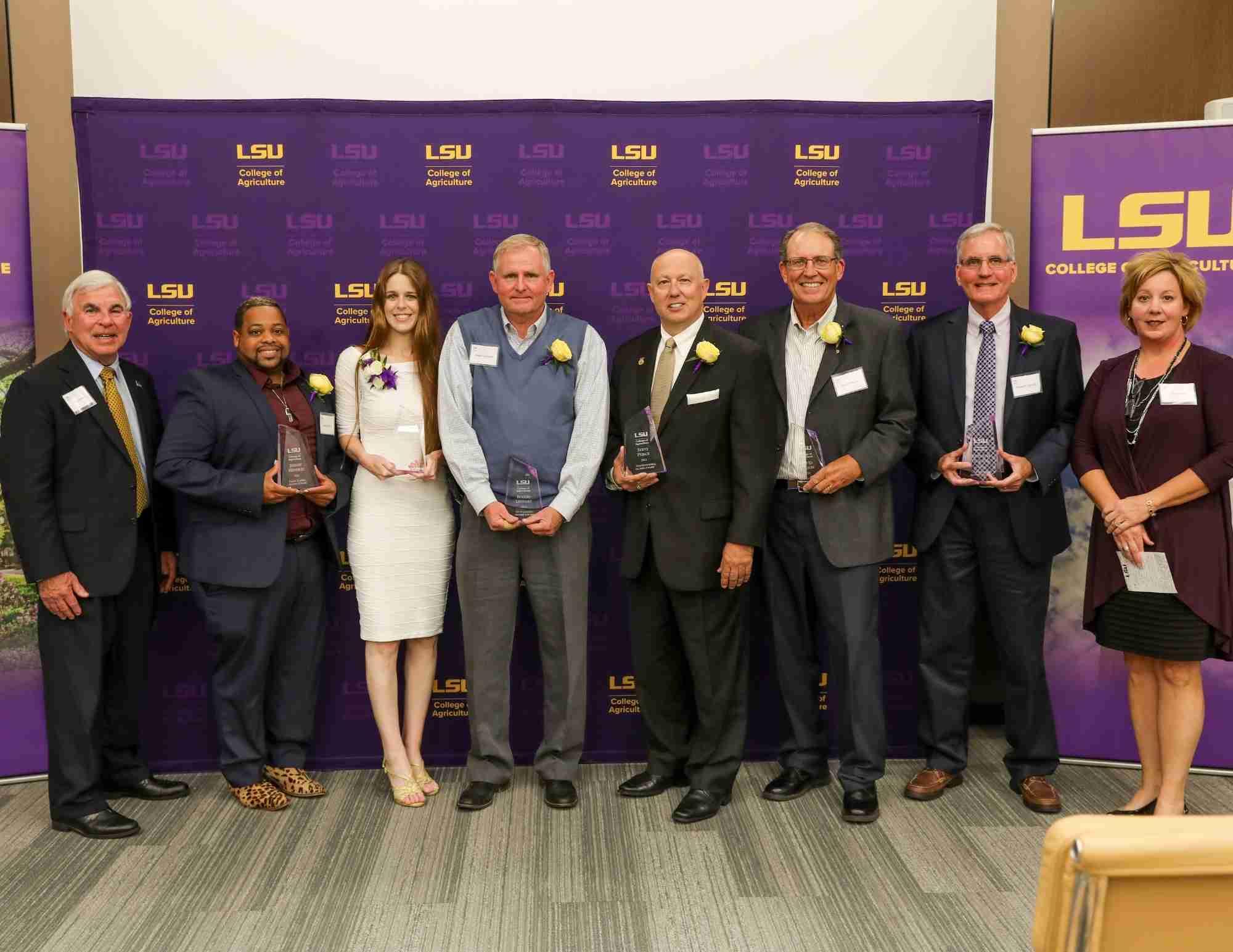 The LSU College of Agriculture Alumni Awards ceremony was held on Nov. 19, prior to Cocktails and Cuisine fundraiser. The ceremony recognized the 2020 and 2021 Outstanding Alumni Award recipients. 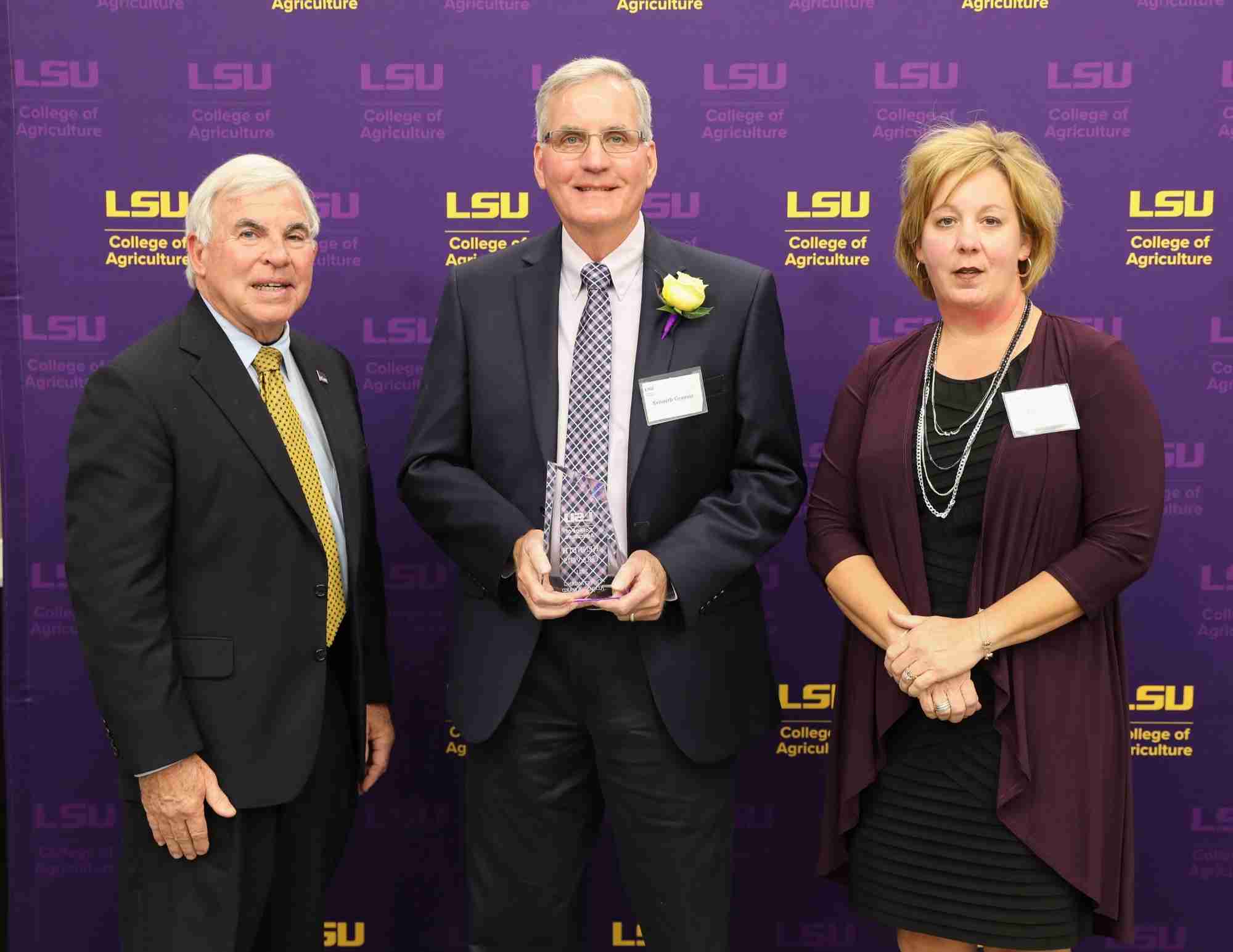 Kenneth Gravois is a three-time graduate of the LSU College of Agriculture, earning his bachelor’s degree in crop science and master’s and doctoral degrees in plant breeding. Gravois is the Sugar Research Station and Southwest Region Extension Sugarcane Specialist for the LSU AgCenter.

Over the past 20 years, he has made many contributions to Louisiana’s sugarcane industry. Successful breed variety programs are essential to the success of the Louisiana sugar industry, and Gravois has collaborated with the U.S. Department of Agriculture and the American Sugarcane League to develop and release 24 commercial varieties of sugarcane. 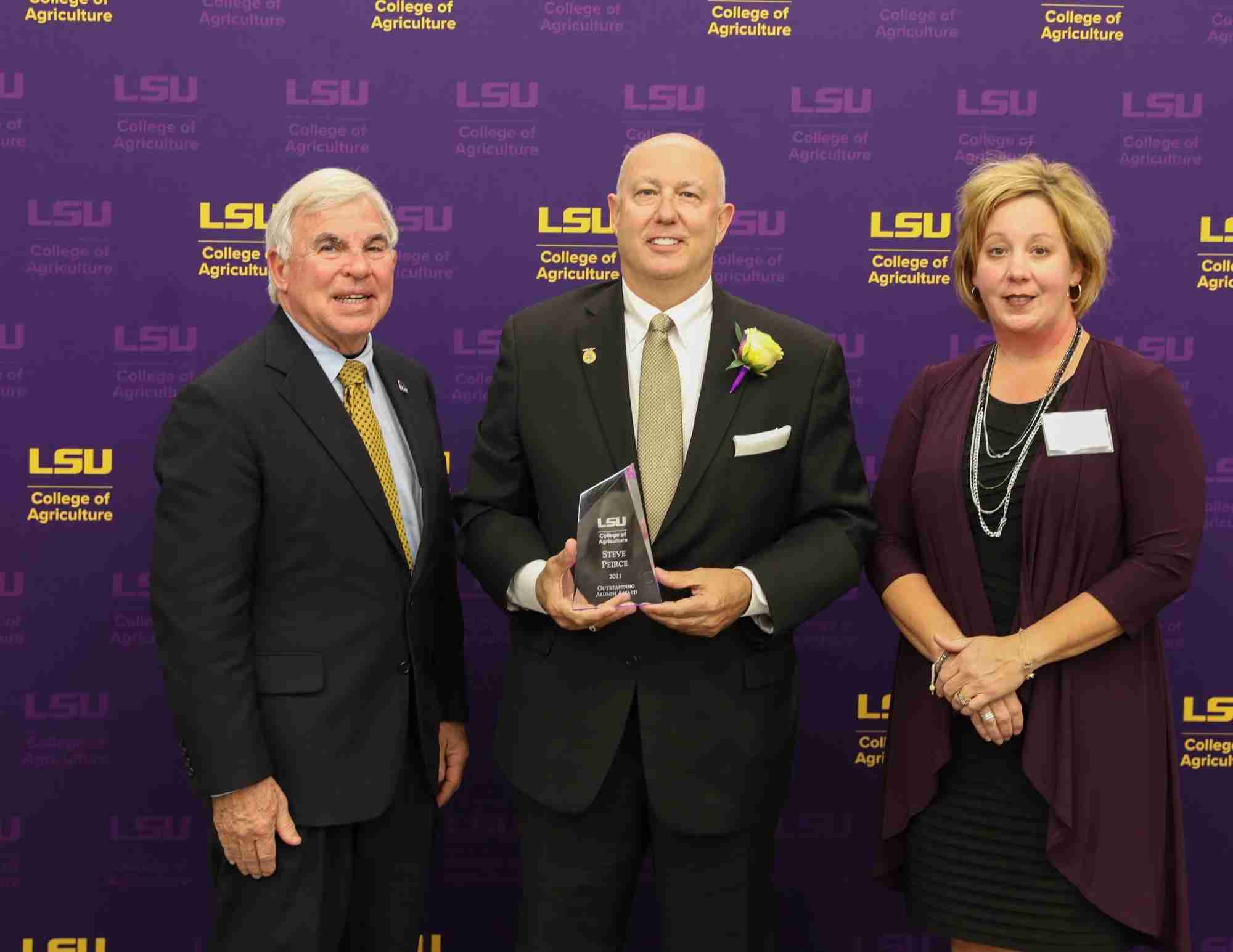 Peirce graduated with a bachelor's degree in agricultural business and economics in 1981. He is the president of RIBUS International, a food ingredient company based in St. Louis, Missouri.

Under Peirce's leadership, RIBUS has been awarded patents on three products in more than 15 countries, launched six ingredients (both conventional and organic) that have been exported to 40 countries, and has been positioned as a "Clean Label" ingredient company, using rice hulls and rice bran as alternatives to synthetic compounds.

During his time at LSU, Peirce was active in many student organizations, including serving as the state vice president for Louisiana FFA, chapter president for Collegiate FFA, pledge class president of Alpha Gamma Pho, president of the College of Agriculture Student Association and president of Omicron Delta Kappa Honor Society.

In recent years, Peirce was awarded Honorary State Farmer in 2019 from the Louisiana FFA, Excipient of the Year from 2019-21 from Nutrition Industry Executive, Missouri Ag Exporter of the Year in 2011, and was appointed as USDA Advisor to the Secretary of Agriculture for Grain and Seeds in 2016. 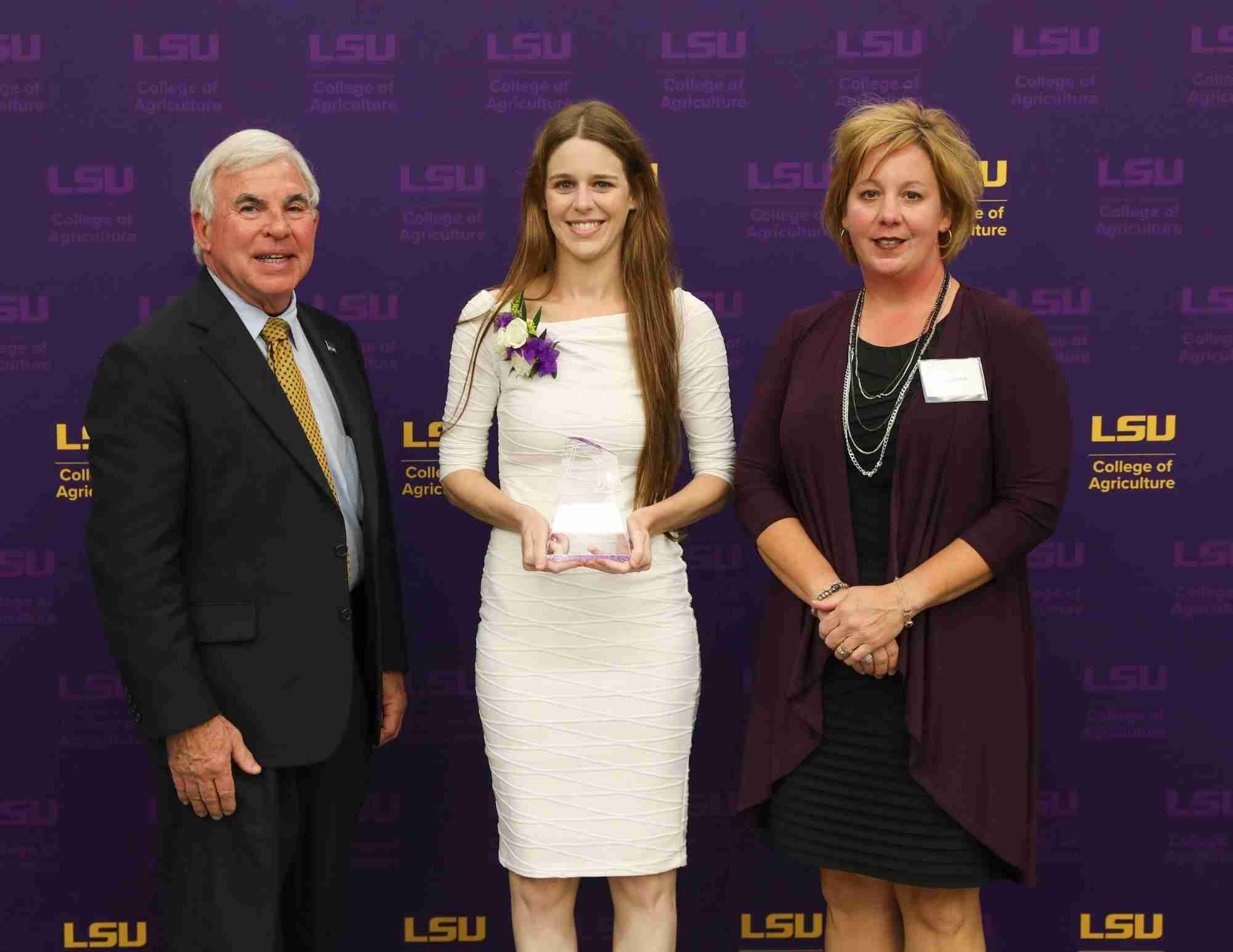 Melanson received the early career alumni award, which acknowledged her contributions to the extension field.

Melanson attended graduate school at LSU, where she received her master’s in 2011 and her doctorate in 2014 in plant pathology and crop physiology (PPCP).

During her time at LSU, Melanson was an active leader in the PPCP Graduate Student Association, the American Phytopathological Society (APS), and the Southern Division of APS.

Melanson is now an associate extension professor for the Mississippi State University Extension Service. She has statewide responsibilities for vegetables, fruits and nuts. In this role, Melanson educates and assists stakeholders, including commercial producers and county agricultural agents, with plant disease identification and management needs.

In her short time with the MSU Extension Service, she has secured over $2 million in grant funding and developed and organized seven additional extension programs. 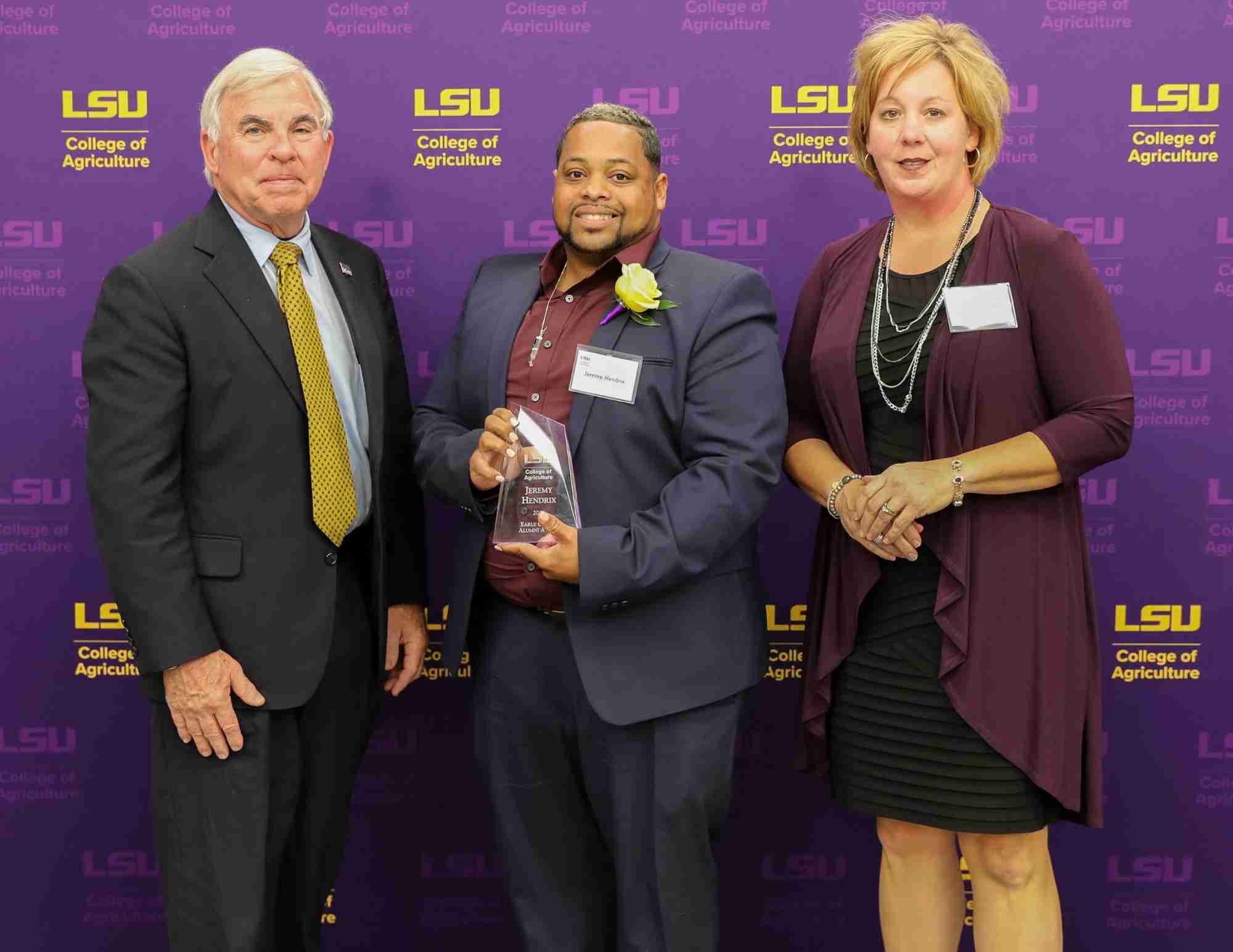 Hendrix received a bachelor’s degree in animal sciences with a concentration in science and technology in 2004. Shortly after graduation, he started working at the Louisiana Department of Agriculture and Forestry as a weights and measures inspector.

He has been a valued employee at LDAF, serving in many capacities. Hendrix currently serves as the Assistant Director of the Soybean Promotion Board, National Organics Program State Coordinator, State Agency Ethics Liaison, Safety and Loss Prevention Program Director and Director of Minority and Veteran Affairs at the Louisiana Department of Agriculture and Forestry.

Hendrix was an active member of Minority in Agriculture Natural Resources and Related Sciences when he was a student, and volunteers with the LSU and Southern University MANRRS chapters. He provides students with information on careers in agriculture, assistance in funding opportunities at LDAF, as well as advising them on USDA mentorship and various other programs.