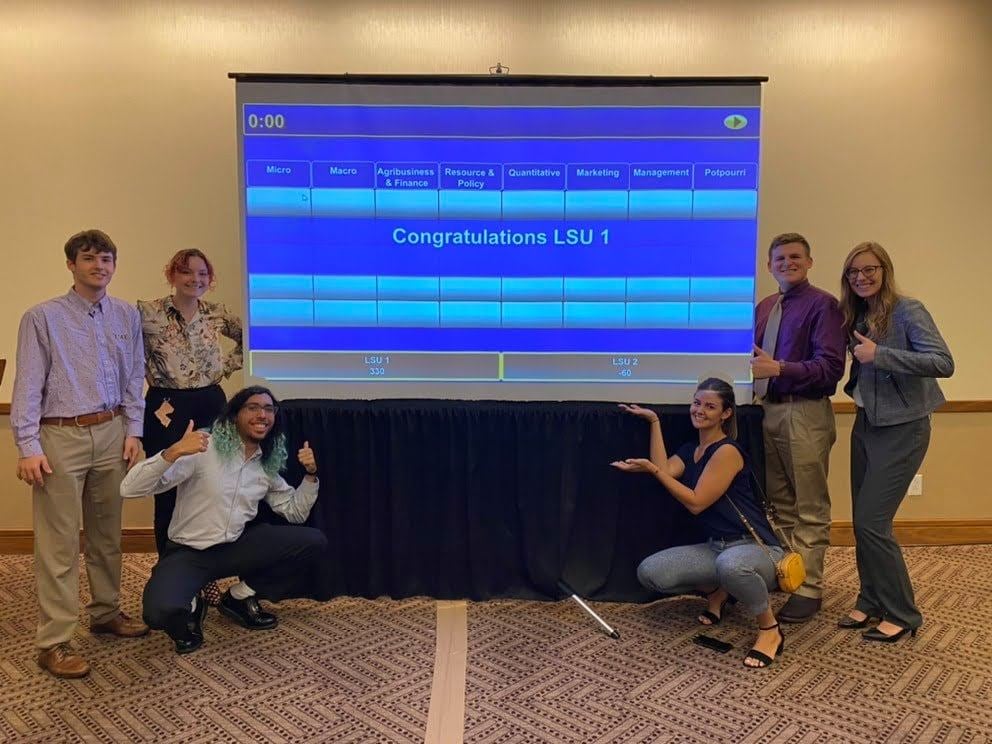 Victory was twice as sweet for the LSU College of Agriculture agricultural business students who competed in the 2021 Agricultural and Applied Economics Association (AAEA) academic quiz bowl.

Each year, students test their knowledge of agricultural economics, answering questions centered around agribusiness coursework. Categories include microeconomics, macroeconomics, agribusiness and finance, resource and policy, quantitative, marketing, management, and potpourri.
Around 15 teams from 10 schools across the nation compete in the academic quiz bowl.

As the tournament bracket narrowed, both of LSU's teams held out. The LSU teams went head-to-head during the quiz bowl finals.

Jerrod Penn, an assistant professor in the Department of Agricultural Economics and Agribusiness, has couched the LSU quiz bowl team since 2019.

"To me, the impressive accomplishment is that we placed first and second, which almost never happens," said Penn. "It is a testament to the dedication and talent of our students, as well as the high expectation the students hold themselves and each other to."

On LSU team one was Colt Hardee, Erin Matherne, and Michael Younis. Team two members were Janie Chapin, Westin Cobb, and Mimi Rivette. LSU team one was named the overall winner of the competition.

"Because academic quiz bowl is a national competition, showcases the quality of our students among our peers. Further, these students can build a network with other future leaders of agribusiness who participate in these competitions.

"Informally, these excellent students learn from each other in terms of other opportunities during and after their bachelor's degree. Several are introduced to academic conferences and research, taking it as a first step towards preparing for graduate school," Penn continued.

In addition to winning the national title, Martherne participated in AAEA's undergraduate paper competition, where her paper placed second.

"Competing in the paper competition was a great experience for professional development. It was really rewarding to showcase all the work I put into my research and better my public speaking skills," said Martherne. "It was also nice because AAEA was in-person, so I was able to network with many professionals in the field of Agricultural Economics."

Martherne is a rising senior in the environmental management systems major. In the fall of 2021, she received an A. Wilbert Son's Research Grant through the College of Agriculture. Under Penn's mentorship, she is investigating best practices for outreach with absentee landowners.