Up in Smoke: Tracking the Dangers of Vaping 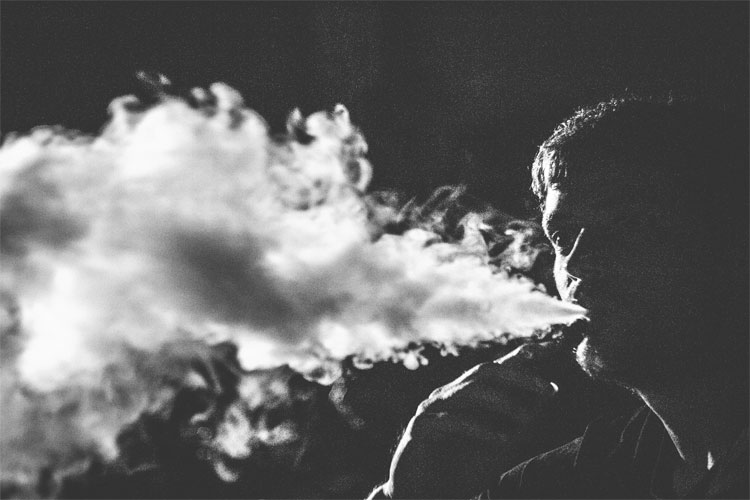 BATON ROUGE—When electronic cigarettes made their debut on the market about 10 years ago, the general public believed they offered a harmless alternative to cigarette smoking. However, that notion has gone up in smoke as evidence of harmful health effects builds like storm clouds. As of December 2019, a total of 2,561 people throughout the U.S. have been hospitalized or died due to lung injuries linked to vaping or e-cigarette use, according to the Centers for Disease Control and Prevention.

“These deaths and illnesses are related to vaping, and it’s only the tip of the iceberg. Doctors are just now seeing the harmful effects,” said Alexandra Noël, assistant professor of Comparative Biomedical Sciences at the LSU School of Veterinary Medicine.

Noël is conducting a two-year research project funded by the Food and Drug Administration (FDA) and the National Institutes of Health (NIH) to collect, measure, and evaluate information on the impact of vaping on lungs. She hopes results from her studies will help Americans make informed decisions and keep them safe from the dangers of vaping.

“People initially thought vaping was safer than cigarette smoking. We could see in the lab that it is not safe. Inhaling e-cigarette vapor is harmful,” she said.

According to Dr. Noël, who specializes in the diseases of lungs, cigarette smoking is a slow killer, but the relatively recent phenomenon of vaping involves different chemicals that can have a rapid health impact. Facts about vaping, including what chemicals make up the tiny particles that enter the lungs of users when the vapor is inhaled and how these facts affect health over the long term, are only beginning to be scientifically documented.

“We are independently attempting to verify claims made by vaping device producers,” she said.

According to the NIH, vaping involves a battery-powered device called an e-cigarette that heats a liquid into a vapor that can be inhaled. The vapor may contain nicotine (the addictive drug in tobacco), flavoring, and other chemicals. E-cigarettes can also be used with marijuana, hashish oil, or other substances. In conjunction with studies underway, the NIH warns that vaping may pose serious and avoidable health risks. Exposure to nicotine among youth can lead to addiction and cause long-term harm to brain development, which isn’t complete until people are in their mid-20’s. The e-cigarette vapor can also contain other toxins, including some that cause cancer.

"We're seeing kids that are using four pods a day, and this is the equivalent of four packs of cigarettes a day. I mean, it is an astounding amount of nicotine that is being delivered by these products," Dr. Karen Wilson of the American Academy of Pediatrics, said in an interview on National Public Radio last November.

Manufacturers don’t have to report e-cigarette ingredients, so users don’t know what’s actually in them, according to the NIH’s National Institute on Drug Abuse. NIDA conducted a survey asking teens what was in their e-cigarettes, and 66 percent said just flavoring, 13.7 percent didn’t know, 13.2 percent said nicotine, 5.8 percent said marijuana, and 1.3 percent said “other.”

There are various types of e-cigarette devices. Recent versions contain a tank where users can put their choice of substance, including flavored liquids and drugs. These substances affect the type of vapor inhaled into the lungs. One brand, Juul, offered candy, fruit, and mint flavorings that often appealed to young people. In an effort to quell an epidemic of 5 million teenagers vaping, some states, like New York and Michigan, have banned flavored e-cigarette liquids.

“Compared to other types of e-cigarettes, the Juul device heats liquid at a lower temperature, which allows the user to inhale nicotine with lower levels of harmful agents. Juul uses disposable pods, and you can’t change the device settings. We’re evaluating the effects of these devices as well,” Noël said.

Juul Labs Inc. and its competitors grew essentially unchecked until the FDA finalized its policy for regulated e-cigarettes as new tobacco products in 2016, according to a recent TIME magazine report. Now, with new health impact information coming to light, e-cigarette makers must apply retroactively for FDA approval by May 2020.

In November 2019, Juul removed from the market all flavored pods, for example, Crème, Mango, and Mint. The legal age in the U.S. to smoke is expected to rise to 21 in 2020, with a new law passed by Congress in December 2019. The age increase will cover cigarettes, e-cigarettes, and all other tobacco products. India has banned e-cigarettes altogether.

“A claim cannot be made that vaping is harmless. Research has already started to provide scientific evidence,” Noël said from her office at the LSU School of Veterinary Medicine, which ranks eighth in NIH research funding among all veterinary schools in the U.S.

Still, vaping of substances, including nicotine, flavored liquids, marijuana, and hashish oil, all increased in a recent survey of teens.

“Teens are clearly attracted to the marketable technology and flavorings seen in vaping devices,” explained Dr. Nora D. Volkow, director of NIH’s National Institute on Drug Abuse. “However, it is urgent that teens understand the possible effects of vaping on overall health, the development of the teen brain, and the potential for addiction.”

To track the dangers of vaping, Noël and her research team are examining how two design characteristics of third-generation tank-style e-cigarette devices—atomizer (coil) resistance and battery voltage—affect e-cigarette aerosol (vapor) composition and cellular toxicity. They are also comparing the pulmonary toxicity responses of these e-cigarette aerosols (vapor) by evaluating lung function and screening for biomarkers of pulmonary toxicity in mice exposed by inhalation.

“We expect to see that vaping will decrease lung function,” Noël said.

Noël’s laboratory is currently funded by several grants, including those from the Louisiana Board of Regents and the NIH, National Institute of Environmental Health Sciences/FDA. Noël’s work is also part of the LSU School of Veterinary Medicine Center for Lung Biology and NIH Centers of Biomedical Research Excellence, or COBRE program. Every six months she submits a report to the NIH NIEHS/FDA describing the results obtained thus far from her research.

“We hope to inform policy makers as they consider what they can regulate, for example, flavorings and types of devices. We give FDA the information and help them make decisions to improve public health,” Noël said.

Noël has completed the first of two years of funded research on vaping. In October 2019, she presented results so far to an audience of her peers at the NIH Tobacco Regulatory Science meeting. She’s already gathering preliminary data for her next studies. Noel works in collaboration with Arthur Penn, Ph.D., professor in the Department of Comparative Biomedical Sciences and director of the LSU School of Veterinary Medicine Inhalation Research Facility, which Noël manages. Her research team includes one post-doctoral researcher, one research associate, two graduate students, and two LSU undergraduates.

Conducting vaping research at a veterinary school may strike some as unusual. However, it fits within the heart of LSU School of Veterinary Medicine’s mission to teach, heal, discover, and protect. The School works with other universities, government agencies, and private organizations to improve the lives and health of both people and animals. A concept known as One Health recognizes that the health of people, animals, and the environment are inextricably connected.

Before starting her post-doctoral training at LSU, Noël’s parents asked her, “Why study cigarette smoking? We already know it’s bad for health.” Nevertheless, she pursued her interest in lung diseases. Six years ago, she saw an advertisement in the Job Bank of the Society of Toxicology and moved from Montreal to the LSU School of Veterinary Medicine in Baton Rouge as a post-doctoral researcher studying second-hand smoke and combustion-derived ultrafine particles in pulmonary health.

As Noël honed her expertise in exposures to tobacco-related products, vaping was rapidly becoming popular. She was well-positioned to apply her scientific knowledge to a new and pressing problem.

“It’s timely work. I didn’t expect to contribute on this magnitude. I guess it’s a case of being at the right place at the right time. You can’t really predict the subject of a lifelong work. There are always emerging areas,” she said.

Noël credits working with Dr. Penn and members of his laboratory, the Inhalation Research Facility, and the LSU School of Veterinary Medicine facilities as positive factors supporting her vaping research efforts.

“We still have a long way to go. We’re starting to put all the pieces together,” Noël said.

Photo by Rubén Bagüés on Unsplash