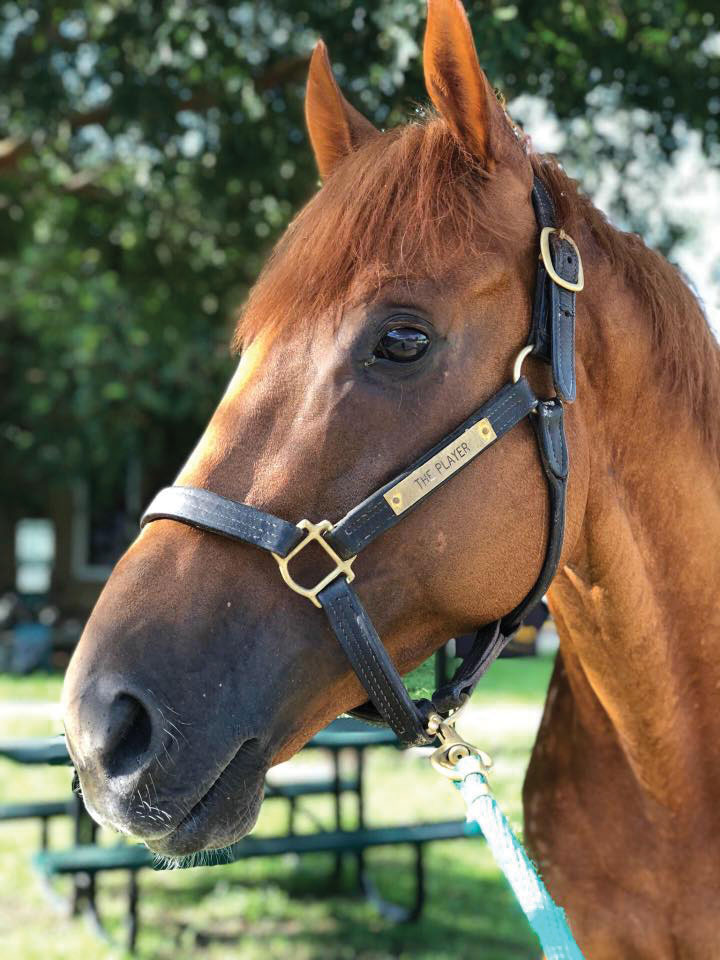 A beloved, quirky racehorse named "The Player" makes a comeback from injury to a new life with expert care at the LSU School of Veterinary Medicine

BATON ROUGE, LA - The Player came into the world a little different from other horses. He liked to sit on his haunches like a dog, spin 360s, and eat his hay lying down—not exactly qualities one would expect in a horse, not to mention, a racehorse. Owner-trainer-breeder William “Buff” Bradley found his behaviors so quirky that he had him checked early on for possible neurological issues. Turns out, The Player, originally named Angus, was just fine. In fact, his quirkiness would serve him well, keeping him off his feet for long stretches, while he recovered from surgery at the LSU School of Veterinary Medicine to repair an injury that would’ve put down most horses. 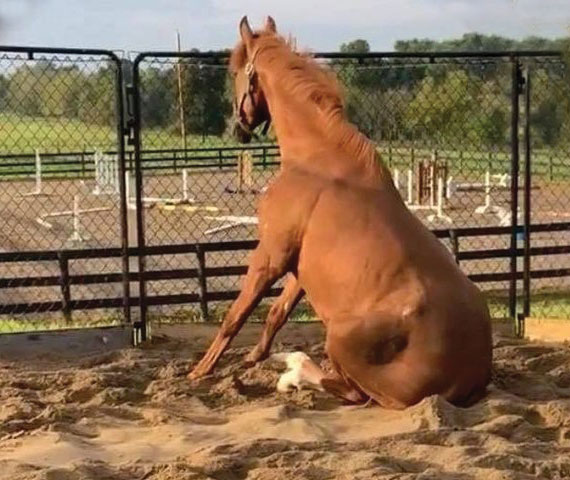 The Player sitting in his own unique way.

The Player, a chestnut thoroughbred, was born March 22, 2013, on Bradley’s Indian Ridge Farm in Frankfort, Kentucky. He instantly won the hearts of Bradley and a whole host of fans charmed by his unparalleled zest for life.

“He was our favorite from Day 1,” said Bradley, who has owned, trained, and bred horses throughout his life.

Despite his quirks, Bradley saw in The Player the heart, strength, and smarts to become a winner on the racetrack.

The Player ran his first race on September 26, 2015, and proceeded to establish himself as a proven winner. In 2018, he was poised to win in the $400,000, Grade 2 New Orleans Handicap. However, rounding the turn toward the finish line he faltered, the jockey pulling him to an abrupt stop.

There on the racetrack, the injured horse’s fate hung in the balance and time seemed to stop for Bradley as he realized what was unfolding. He peeled off his jacket and ran down to his horse on the track. An initial assessment indicated shattered bones, tendons, and ligaments behind his right, front ankle. In fact, both sesamoids at the back of the fetlock had fractured. Bradley recalled thinking, “I’m going to quit training. I’m not doing this without The Player.” That day, March 24, 2018, The Player’s growing racing career would end. 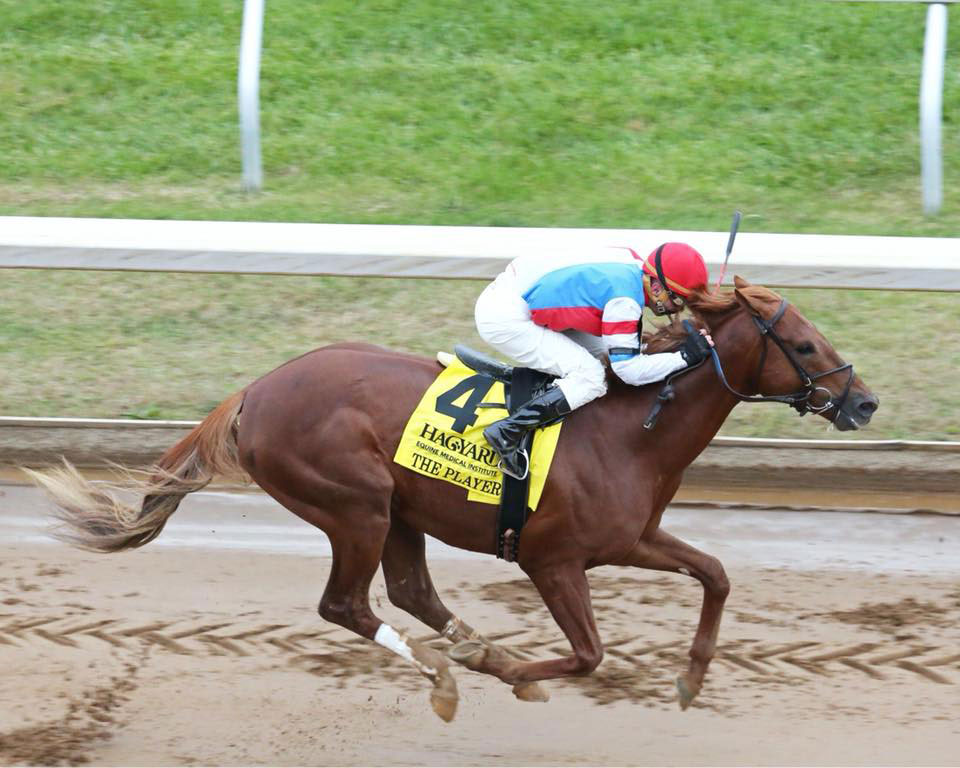 Standing next to his horse, Bradley called his Kentucky veterinarian, Dr. Bradford Bentz.

“He told me, ‘he’s a really good candidate for euthanasia, but you could try LSU,’” Bradley said.

After consulting longtime business partner Carl Hurst, Bradley called Charles McCauley, DVM, DABVP, DACVS, assistant professor at the LSU SVM, to ask if there was any way the horse could be saved. Dr. McCauley told him they could perform the surgery, but that they didn’t have many cases like The Player’s because most horses with that type of injury were euthanized due to a poor prognosis for recovery. The surgery would be straightforward, the recovery long, and post-surgery complications would be a major concern.

Straight out of the gate, Bradley trusted McCauley with his horse. They had met when Dr. McCauley did a dynamic scope on another horse at his barn just a month earlier, and he was impressed.

“He didn’t paint a pretty picture. I let him know that The Player is a unique horse. And he’s smart. I told him I thought he could handle the recovery part. My partner, Carl, and I talked it over. We agreed to try to save him as long as he wouldn’t suffer. We cried a bit. This horse had so many people who love him,” Bradley said.

Dr. McCauley told Bradley to go ahead and bring the horse to the LSU SVM, where he’d assemble his medical team. He and the horse would embark upon a marathon toward a different kind of finish line. 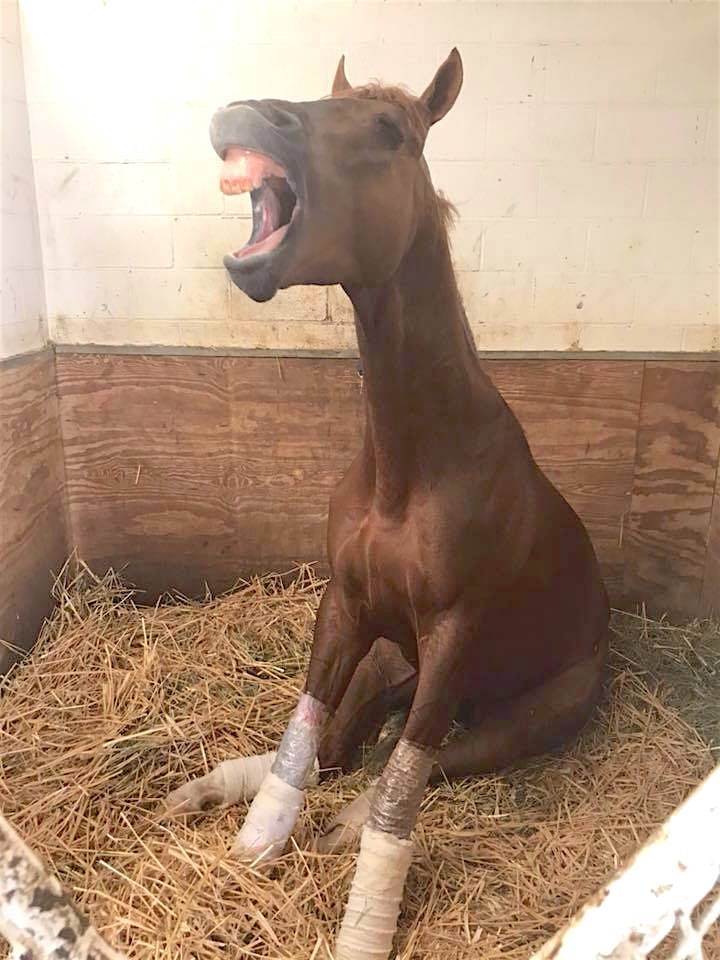 Bradley loaded his broken horse onto an ambulance trailer, and he and The Player headed for Baton Rouge. Arriving that Saturday night at the LSU SVM Veterinary Teaching Hospital, The Player’s medical team immediately went to work on making him comfortable, assessing his injuries, and formulating a treatment plan.

Bradley spoke to his horse, saying, “We’re going to do everything we can to save you, but you’ve got to do your part.”

It was a safe bet that The Player would deliver.

Bradley warned Dr. McCauley about The Player’s ways, advising him that he would see the horse sitting down like a dog and that it was not cause for alarm. Dr. McCauley later told Bradley he was glad he’d been shown pictures of The Player in odd positions, adding that the horse “was different.”

“I told him all the bad things that could happen,” Dr. McCauley said.

The seven-hour surgery took place on March 26, 2018, during which a plate and 16 screws were placed in the horse’s leg. A cable was inserted in the back of his leg to take over the suspension function.

“He knew how to take care of himself, lying down 11-12 hours a day, kept the weight off the injured leg. He even remained lying down while they put a horseshoe on the hoof of his uninjured front leg that would help support him when he stood,” Bradley said.

Dr. McCauley believes that The Player’s quirks were the whole reason he survived. 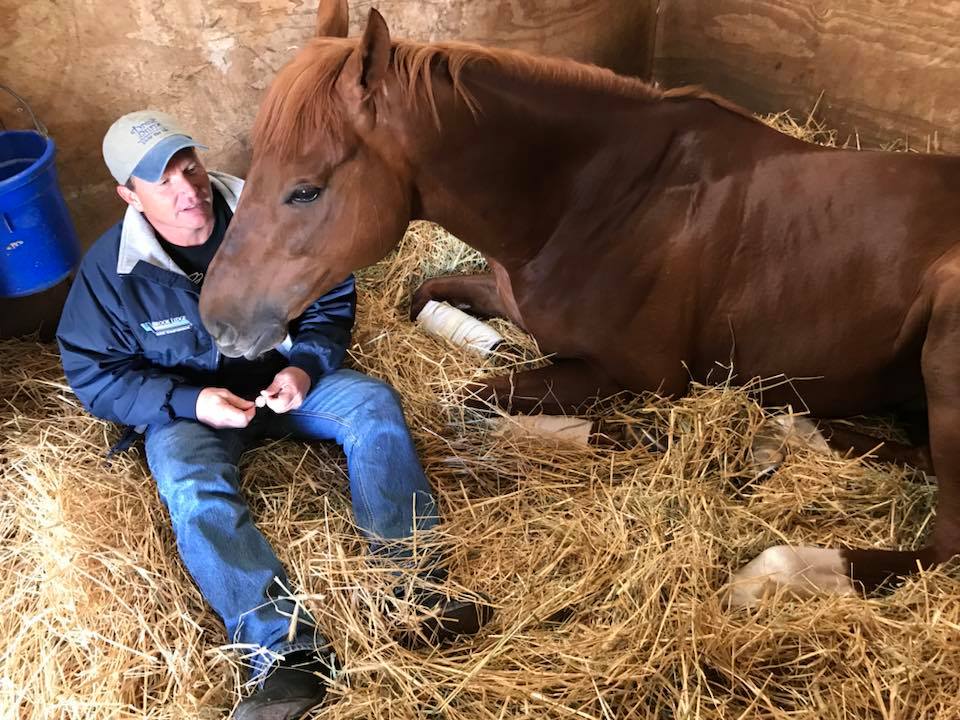 Buff Bradley sits with The Player.

“His routine was to lie down for several hours a day. He was an incredibly compliant patient. He was obviously uncomfortable, and yet he behaved. I’ve never had another patient like him,” Dr. McCauley said.

Bradley remained in Louisiana with The Player post-surgery for nearly two weeks. When he felt that his horse was solidly on the road to recovery, he returned home to Kentucky to tend to business at his farm and Bradley Racing Stables. He felt confident knowing that the LSU SVM veterinary team was there at all times to care for his horse. In addition to Dr. McCauley, the team consisted of Laura Riggs, DVM, PhD, DACVS, associate professor; Collin Mitchell, BVMS, DACVS, professor; Rose Baker, BVMS, assistant professor; and Cole Sandow, DVM (LSU SVM 2013), equine surgery resident. According to Dr. McCauley, dozens of veterinary students cared for The Player.

“Every day, they did the hard stuff, administering medications on schedule, doing assessments, and reporting if they noticed problems. It was the epitome of a team effort,” McCauley said.

Even as The Player had been sidelined from racing, fans from across the nation continued to cheer him on through each phase of his recovery.

“The Player is fighting for his life at LSU,” wrote one of many fans who tracked his progress on social media.

Through it all, Bradley kept his horse’s fans updated on his condition by posting regularly on The Player’s social media accounts. The entries tell a tale of hope and progress, punctuated with setbacks:

Neither Bradley, the medical team, nor The Player, himself, ever showed signs of giving up.

“His recovery was slower than I expected. We needed objective measures--radiographic evidence of healing--to show that the fusion had progressed enough for him to take the long trailer ride home to Kentucky. A trailer ride is an athletic event with all of the stops, starts, and turns. The horse must withstand it all,” Dr. McCauley said.

Capturing the sentiments of many, one fan posted on The Player’s Facebook page, “There is nothing better than seeing a fighter like The Player to love and cheer for!”

Bradley made the 12-hour drive each way from Kentucky to Louisiana several times throughout The Player’s hospital stay. He’d arrive with a pocket full of peppermints, The Player’s favorite.

It would be six months before The Player could be released from the LSU SVM and return home to Kentucky. When the day finally came, Bradley rode in the back of the trailer with him. They stopped frequently to allow his horse to rest before continuing on. He’d reached out to friends and acquaintances familiar with The Player asking if they could provide a stall for the night so his horse could make the long drive comfortably. Bradley received many offers of lodging for both himself and his horse. 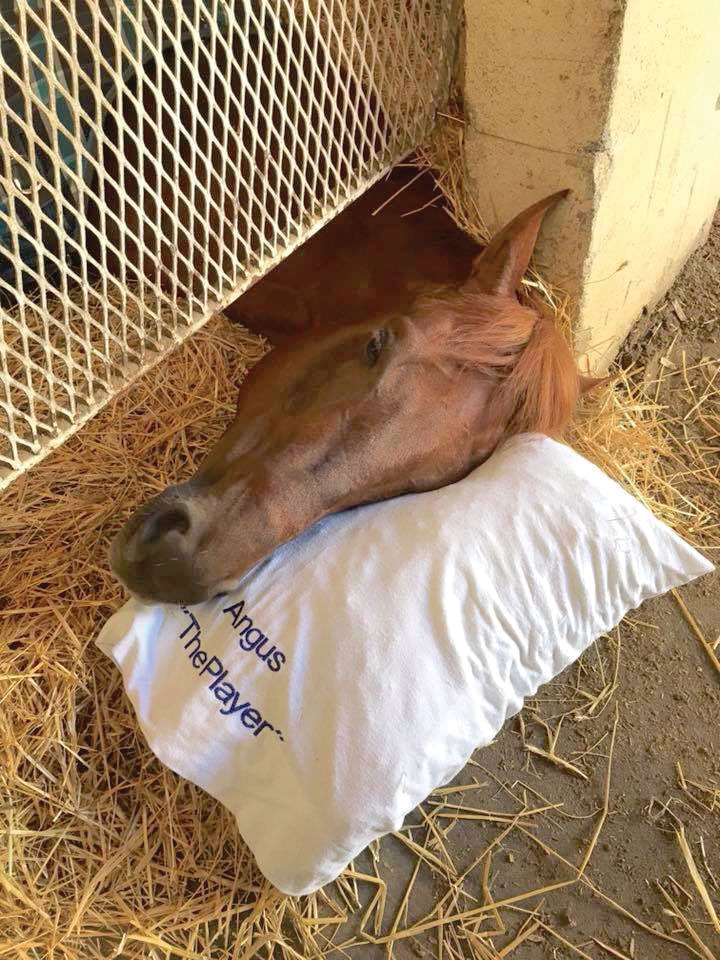 The Player with his monogrammed pillow.

“He comes from a family of tough, solid runners. He was at the start of a promising racing career,” Bradley said.

Once home, The Player began a new career. At nearby Crestwood Farms, he has sired 10 foals per season over the past two seasons. His first offspring, born on February 24, 2020, is a colt that fans praise as “handsome like his daddy,” with hopes that The Player’s offspring inherit his intelligence, athleticism, and endearing qualities.

The Player’s social life has continued to pick up speed. Bradley has held two open houses for The Player at his farm during Breeder’s Cup weekend at Churchill Downs. About 150 attended each event, where visitors mingled, enjoyed food and drinks, and visited with their favorite horse.

Dr. McCauley traveled to Kentucky as a guest of honor at one of the open houses and had the pleasure of seeing the former patient on his home turf charming his fans.

“He was winning when he went down. I truly believe this horse saved his own life because of who he is,” Dr. McCauley said.