BATON ROUGE, LA—Connie Tingle didn’t know if she and husband, Larry, were ready to adopt another dog after losing their German shepherd in 2005. Her husband was working in Africa for Exxon and she was teaching kindergarten in Ft. Lauderdale, Florida, at the time Hurricane Katrina hit Louisiana in August of that year. Shortly thereafter, she decided to visit her local animal shelter, the Humane Society of Broward County. 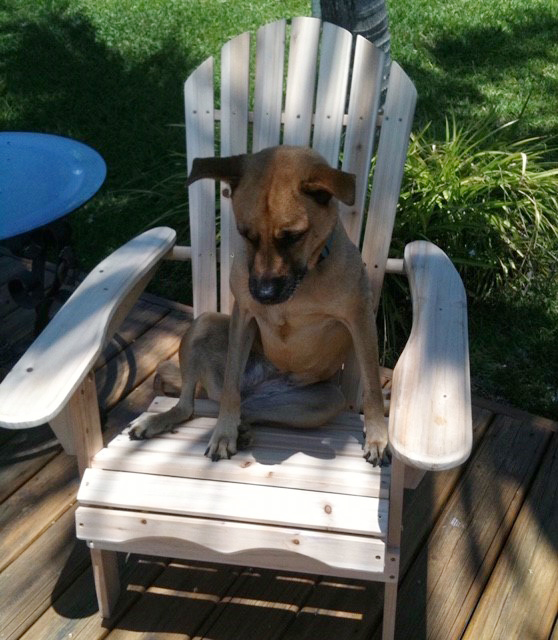 Nola as a puppy.

That’s where she first saw an emaciated 14-lb. dog in a pen full of big dogs. The shelter worker said, “Those dogs came from Katrina.”

In fact, 8,000 dogs and cats rescued due to the hurricane were brought to a temporary shelter at the Lamar-Dixon Expo Center in Gonzales, Louisiana, and many more went to different shelters or were transported to other states to ease overcrowding. Many fended for themselves on the streets. Cats and dogs were stranded on rooftops, locked in bathrooms with the tub full of water, swimming through floodwaters, and roaming the streets. Many died. Public outcry about the plight of animals left homeless by the storm led to legislation impelling rescuers to save pets as well as people during natural disasters. The 2006 Pets Evacuation and Transportation Standards (PETS) Act recognized pets as members of society.

But this law didn’t exist when dogs like the one Connie saw got scattered to the winds by the storm. Connie asked to see the small dog, and the worker brought the dog to visit with her in a small room. The dog paced the perimeter, shaking, until the worker finally said, “Oh well, we tried,” and started to take her back to the pen.

“When the girl picked her up, the dog laid her head on her shoulder and looked at me, as if to say, ‘Don’t leave me here,’ and I said, ‘I’ll take her home,’” Connie said.

Connie picked her up the moment the shelter opened the next morning after she was spayed prior to adoption. She was heartworm positive and was treated for what can be a fatal disease. Connie named the dog Nola, in honor of where she came from, New Orleans, Louisiana. Nola, a black mouth cur, was about six months to a year old when Connie and Larry adopted her. Now, she’s 16 years old, weighs 45 lbs., and is enjoying life in South Florida.

“Every day, we are so happy she’s healthy. She’s very smart, smarter than our German shepherd was, and she’s mellow. She’ll bark once to let us know she wants something,” said Connie.

Nola never barked at all the first year at home with Connie and Larry.

“Once, in the middle of the night, a robber being pursued by police ran into our yard. That’s the first time we ever heard her bark. She was alerting us to danger. We said, ‘Our little dog 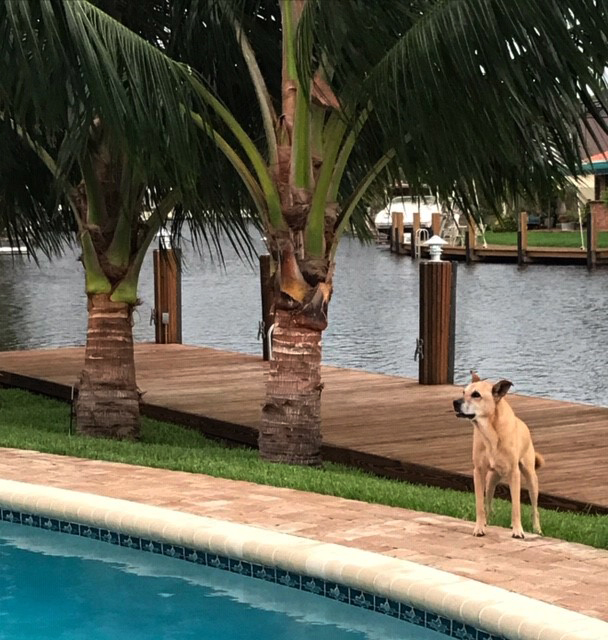 Nola goes everywhere her people go. She gets along well with other dogs and children. The Tingles brought her back to New Orleans on a visit in 2014. (Both Connie’s mother and father are from Louisiana, but she and her husband grew up in Mississippi.) In New Orleans, Connie recalled a sheriff advised them not to leave Nola in a yard unattended as people in the city were still looking for their lost dogs after Katrina. He said someone might steal her.

“She is the absolute sweetest, most gentle animal I’ve ever met. She’s now in her older years but loves to spend her days laying out on their dock and chasing away any iguanas that show up!” said Molly McCann, Connie’s cousin of Baton Rouge, Louisiana.

Dogs like Nola were the lucky ones to come out of the storm, and Nola’s life attests to her resilience and loving home. Nola has lived to see the 15th anniversary of Hurricane Katrina.

“We are so impressed with Nola. She is the best dog,” said Connie, who wants to start a rescue in South Florida to assist animals displaced by natural disasters. Perhaps it will be named in honor of Nola.