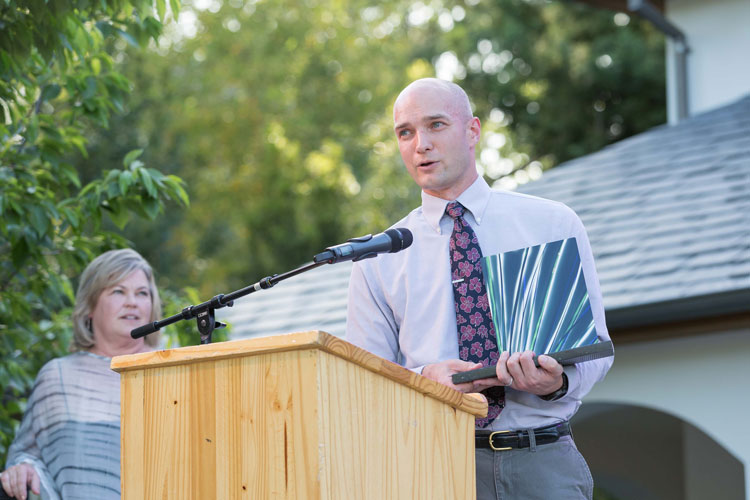 BATON ROUGE, LA—Britton Grasperge, DVM (LSU SVM 2007), PhD (LSU SVM 2012), DACVP, assistant professor in Pathobiological Sciences, received the Alexandra Cohen Emerging Leader Award and a $100,000 grant from the Bay Area Lyme Foundation to further his research to identify substances within the tick saliva that are responsible for attracting the bacteria that causes Lyme disease in an effort to develop a better diagnostic. The Bay Area Lyme Foundation is a leading non-profit funder and advocate of innovative Lyme disease research in the U.S.

Dr. Grasperge, who is from New Orleans, received the award at a 2-day event hosted by the Bay Area Lyme Foundation aimed at helping make Lyme disease easy to diagnose and simple to cure. Scientists and clinicians, who met to strategize concepts and collaborations on April 30, were joined by more than 300 philanthropists, celebrities, patients and others in the medical field for the fourth annual LymeAidÒ on May 1. The benefit dinner and concert raised more than $815,000, of which 100% will go directly to fund research for Lyme disease. More than 329,000 Americans are diagnosed each year with this potentially debilitating disease.

Chase Beisel, PhD, North Carolina State University, was awarded the Laure Woods Emerging Leader Award to explore the potential ability of CRISPR-Cas genome targeting to kill the bacteria that causes Lyme. He also received a $100,000 grant to further his research.

One of the fastest growing vector-borne infectious diseases in the United States, Lyme disease is a potentially debilitating infection caused by bacteria transmitted through the bite of an infected tick to people and pets. If caught early, most cases of Lyme disease can be effectively treated, but it is commonly misdiagnosed due to lack of awareness and unreliable diagnostic tests. There are approximately 329,000 new cases of Lyme disease each year, according to statistics released in 2015 by the CDC. As a result of the difficulty in diagnosing and treating Lyme disease, as many as one million Americans may be suffering from the impact of its debilitating long-term symptoms and complications, according to Bay Area Lyme Foundation estimates.