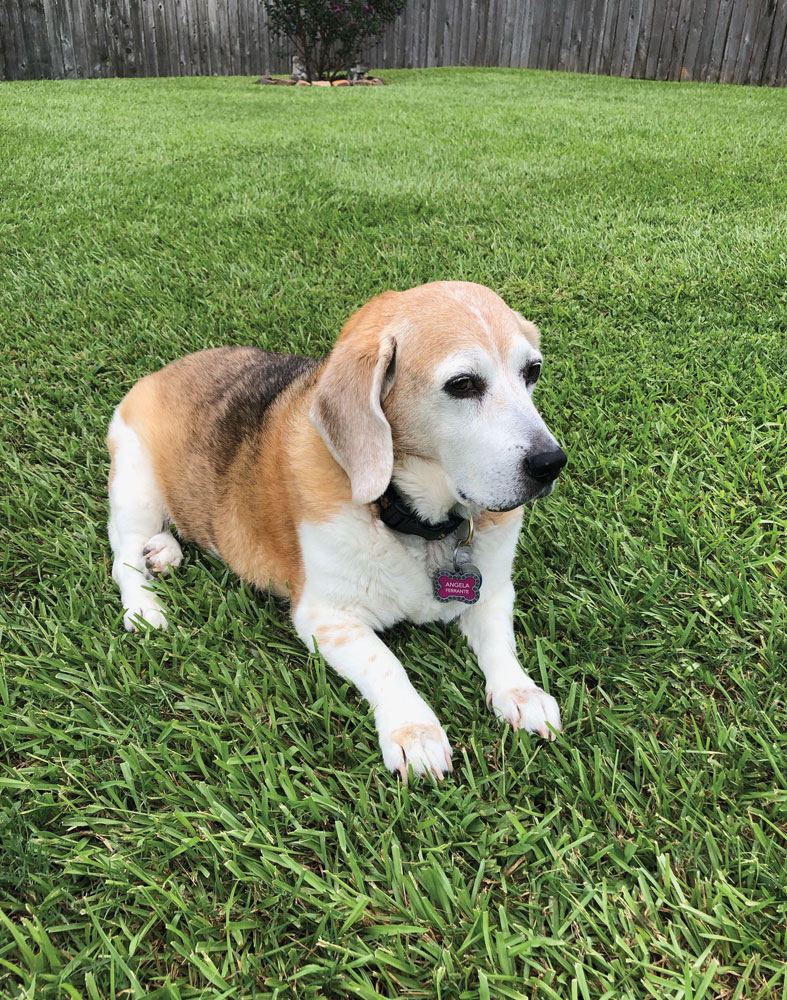 Marion Ferrante got more than she bargained for when she took Angela, her son Darren’s beagle, then 11 years old, to her veterinarian for a nail trim. During this routine visit, Aaron Hood, DVM (LSU 1997), of Hood Veterinary Hospital in Denham Springs, discovered a large growth on the inside of Angela’s right back leg. Tests revealed a cancerous tumor.

Two weeks later, Angela's veterinarian attempted to surgically remove the tumor. However, he could remove only a portion because it had spindle-shaped cells that intertwined with Angela’s tissues and muscles.

“Dr. Hood suggested that we take Angela to LSU because they have clinical trials with animals diagnosed with cancer, and he felt they could help this complex case,” Marion said.

The Ferrantes were committed to getting Angela the best care possible. Angela had been a part of their family since they brought her home at eight weeks old.

“Dr. Jayme Looper and Dr. Jennifer Merkle from LSU reviewed her case and we received a call saying there was hope. They turned out to be Angela’s angels, too,” Marion said. Dr. Looper (LSU 1997) is a professor of veterinary radiation oncology and a board-certified oncologist, and Dr. Merkle completed her radiation oncology residency at LSU in July 2021.

Surgeons at the LSU Veterinary Teaching Hospital performed another surgery on Angela. She was diagnosed with a Grade 2 soft tissue sarcoma.

“We were scared. Everybody at LSU vet hospital was very supportive and kind during such a traumatic time in our lives. They made sure we understood our options,” Marion said.

In September 2019, Angela began 19 rounds of radiation therapy and completed them in October. She wore an inflatable e-collar to keep her from irritating the radiated areas inside her back leg. Angela returned to LSU for a follow-up visit in late October. Her clinicians were pleased with the healing of the irradiated areas.

Medical workups done prior to radiation therapy are very thorough. In fact, tests revealed that Angela has only one kidney.

“That was a surprise,” Marion said.

The treatments combined with surgery allowed Angela to avoid a leg amputation.

“We are so grateful she’s still with us and that we have extra time with her,” Marion said.

Angela, now 13, has intermittent lameness in her right rear limb, and Marion notices her back legs are occasionally weak.

“But we know Angela is now feeling so much better because she has started playing with her toys again and vocally letting us know it’s time to feed her,” Marion said.