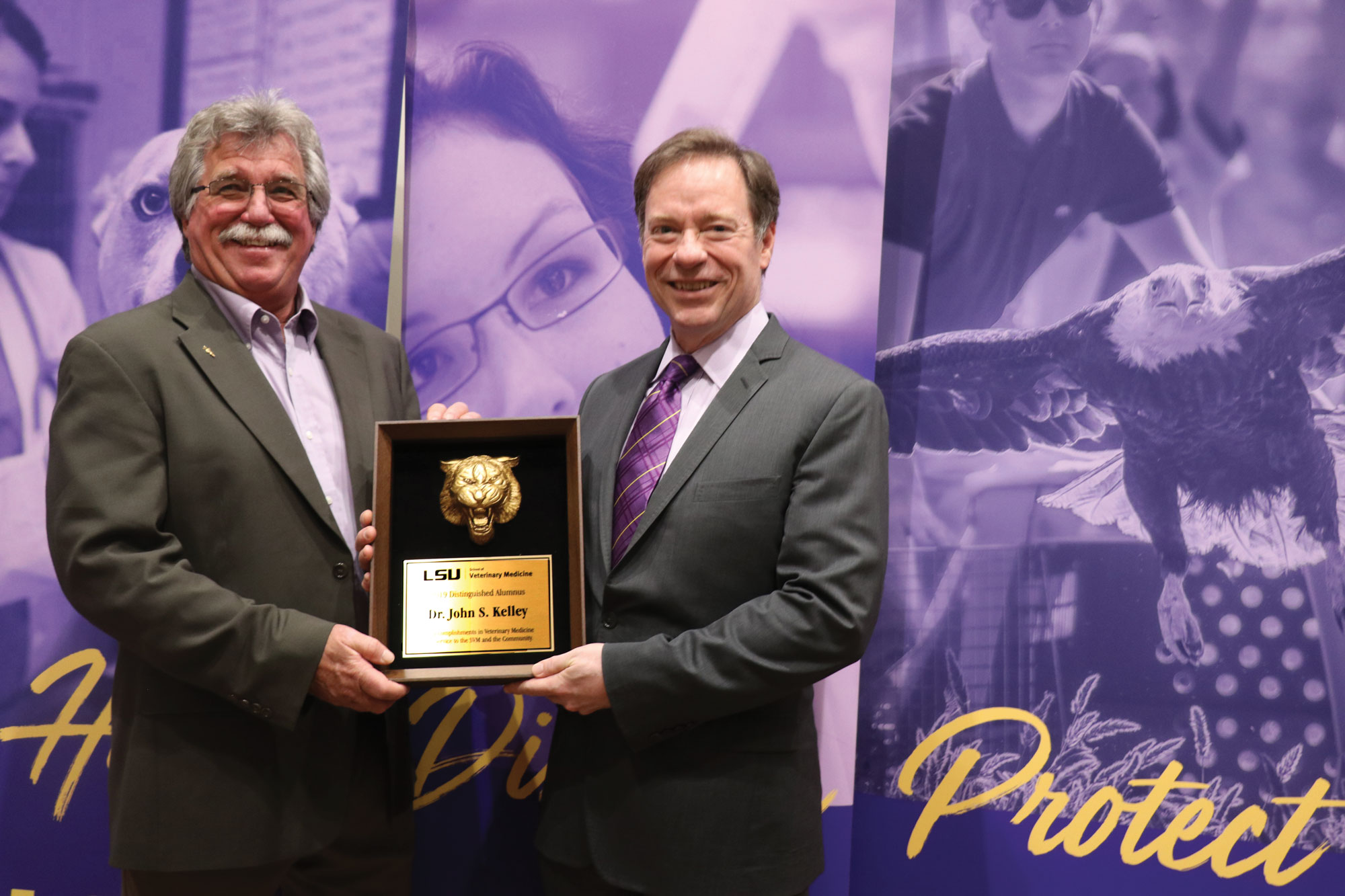 BATON ROUGE—The LSU School of Veterinary Medicine (LSU SVM) is pleased to announce the 2019 Distinguished Alumnus, John Kelley, DVM (LSU SVM 1984). The LSU SVM presented the award to Dr. Kelley, graduate of the Class of 1984, at the Louisiana Veterinary Medical Association (LVMA) Alumni and Friends Reception hosted as part of the LVMA’s Winter Meeting in Shreveport, La., on Feb. 1, 2020.

The Distinguished Alumnus Award was established to recognize LSU SVM alumni for outstanding professional accomplishments, personal achievements, and contributions to the community through public service.

Dr. Kelley is the founder of Lower Cape Veterinary Services, a four-hospital practice in Eastham, Mass. He was instrumental in developing Cape Animal Referral and Emergency Center in S. Dennis, Mass. He is a member of American Veterinary Medical Association, Massachusetts Veterinary Association, and American Animal Hospital Association. Kelley also holds a M.S. degree in theriogenology.

Kelley’s work with animal welfare groups is varied and extensive. He serves on the board of Wild Care, which helps sick, injured, and orphaned wildlife in the Eastham, Massachusetts, area. He is also active with the Animal Rescue League of Brewster, Massachusetts, and CASAS in Provincetown, Massachusetts. Kelley obtained his veterinary license to practice in Puerto Rico so that he could expand his volunteer work with the Vieques Humane Society on Vieques, an island seven miles off the eastern coast of Puerto Rico. He travels there four times a year to perform much-needed veterinary services, mostly surgery. His work helps to control animal overpopulation on the island, where its not unusual to see large groups of wild horses foraging for food.

Closer to home, Kelley has participated for 25 years in the Pan-Mass Challenge, raising funds for life-saving cancer research and treatment at Dana-Farber Cancer Institute through an annual two-day, 192-mile bike-a-thon that crosses Massachusetts. He has raised more than $100,000 for various causes with this and other rides.

He not only has a passion for fundraising but an incredible knack for it. He led the LSU SVM Class of 1984 in a drive to raise more than $40,000 to endow an annual scholarship for a second-year veterinary student at LSU. Classmates say that he led by example with his characteristic good-natured approach and an offer to match their donations.

Since establishing the scholarship in 2017, Kelley has continued to advocate for support for this fund and other programs for the school. This year, the scholarship fund reached $90,000, putting the Class of 1984 as the leader among all alumni classes in giving in both the amount and the percentage of those giving. Kelley’s efforts are directly responsible for the commitment of his graduating classmates’ support of the school.

Kelley’s devotion to the LSU SVM is apparent whenever one speaks with him. He greatly values his education and experiences at the school and is an unfailing ambassador for it.

“Graduating from LSU School of Veterinary Medicine has opened doors for me. If it weren’t for the school, I wouldn’t be doing what I’m doing. I would’ve been an electrician like my father was,” Kelley said.