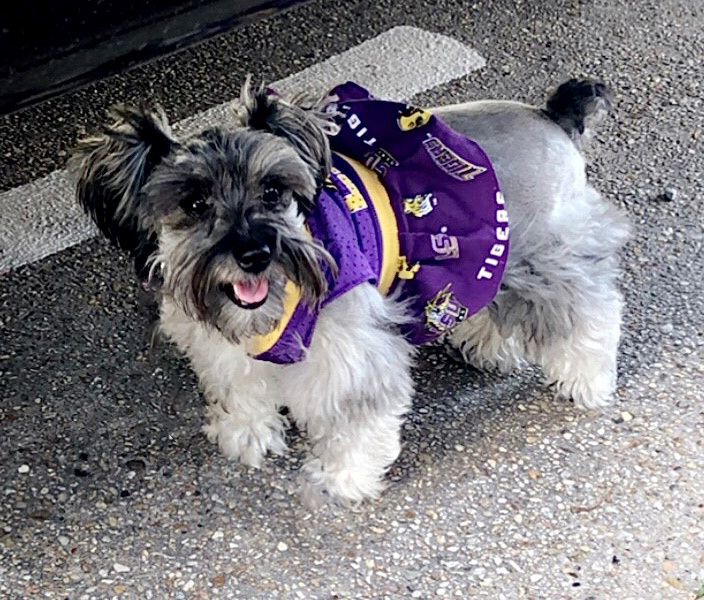 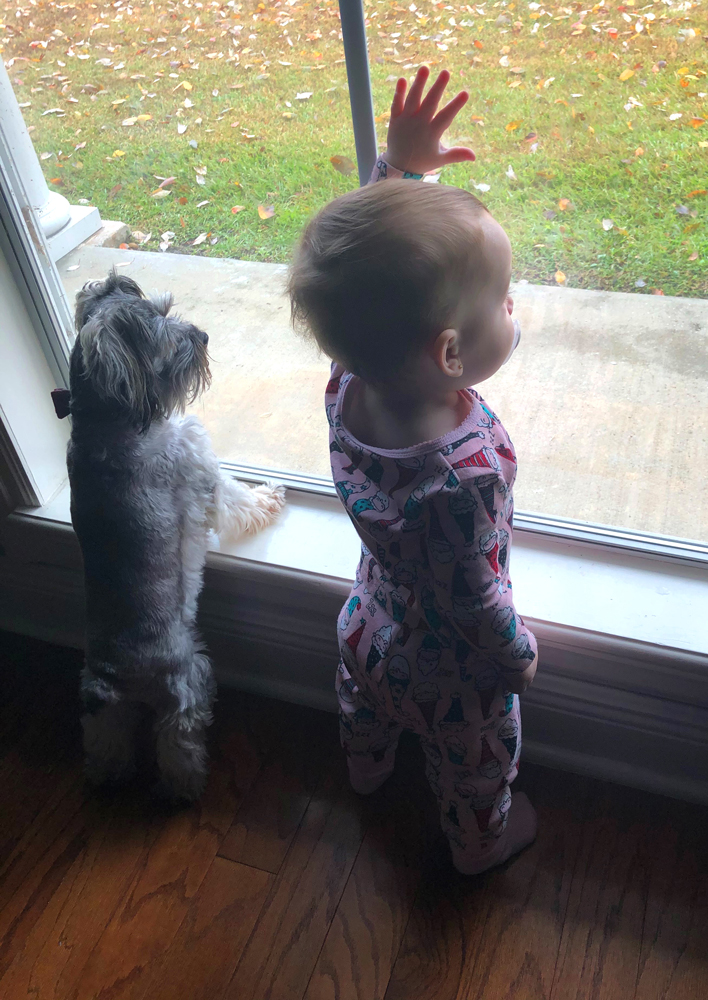 Demi, a teacup Schnauzer, is getting the best birthday present ever this year as she turns three on June 6. She’s getting a new lease on life.

Demi was extremely lethargic when owners, Meghan and Joshua Higginbotham, transferred the dog they’d had since she was seven weeks old to the LSU Veterinary Teaching Hospital on April 13, after their regular veterinarian said she’d need additional expertise to survive.

“She was rapidly diagnosed with septic peritonitis and septic shock. We believe the cause was perforation of the gastro-intestinal tract by a small wire filament, which was found during surgery,” said Andrea Rincon, DVM, small animal emergency and critical care resident at LSU VTH.

After talking with Meghan, Demi’s surgical team believes the metal sliver came from a barbeque brush bristle that Demi ingested.

“I first noticed she was acting differently because she wasn’t wanting to go outside or jump on the couch to be with us. Demi is a non-stop dog. She didn’t care to eat or play, things she loves to do,” said Meghan.

Demi’s care team in the LSU ER said her prognosis was guarded-to-poor early on. Septic shock usually carries a 50/50 prognosis at best, but her chances for recovery were considered lower because of her condition, which initially worsened in spite of aggressive treatment.

“When things went bad with Demi, they went bad fast. The LSU team members were always honest and open, even when they didn’t know if she was going to make it. That was such a scary time for us, so the consistent communication was very relieving,” Meghan said.

The fear was warranted. Demi’s primary veterinarian, Adrian Bergeron, DVM (LSU SVM 2002), recognized her critically ill condition and gave fluids and dextrose before rapidly referring her to the LSU VTH.

“Dr. Bergeron is a graduate of LSU School of Veterinary Medicine and a fantastic clinician. I am really excited to see our team and Dr. Bergeron come together to ensure Demi’s positive outcome. These collaborations are important to the care we provide,” said Mark Mitchell, DVM, MS, PHD, DECZM, hospital director for the LSU VTH.

Once at LSU, she was given more fluids, dextrose support, pain medications, and antibiotics. Her blood pressure did not initially respond to those measures, so the team put her on blood pressure support medications to cause blood vessel constriction and then added a second drug to increase the heart's ability to contract because they were still having trouble getting her blood pressure to respond.

“We finally were able to improve her blood pressure, but some parameters that we use to measure progress (lactate) got worse in spite of it. We gave a unit of plasma just before surgery. We ultimately were able to get her in and out of surgery, though we had problems with her blood pressure again, and we had to add a third drug (vasopressin) post-op,” said Ryan Smith, DVM (LSU SVM 2009), DACEVCC, assistant professor of emergency and critical care who led the team that treated Demi.

An abdominal drain was placed during surgery to allow for constant removal of any fluid buildup in the abdomen. Demi finally turned the corner toward health about 24 hours into hospitalization, on April 14, when the team was able to start weaning her off of some of these medications with a stable blood pressure.

“This case was a great example of practicing cutting-edge medical theory with respect to veterinary critical care and treatment of septic shock. The approach we used is derived from most current recommendations in human medical practice, notably the Surviving Sepsis Campaign (Consensus guidelines) and H.A.T. (hydrocortisone, ascorbic acid/Vitamin C, and thiamine/Vitamin B1) therapies which some studies have shown improvement in mortality rates,” Dr. Smith said.

Demi spent six days in the Intensive Care Unit before she was cleared to go home and eventually resume her life as a playful, feisty, tormentor of her fur brother and snuggly sidekick to the Higginbotham’s 1 1/2-year-old daughter, Hollis.

According to Meghan, Demi is doing great just three weeks out from surgery.

The LSU VTH team that worked to give Demi a new lease on life deserves a lot of credit, according to Smith.

“These people deserve a ton of the credit for cases like Demi's that are incredibly intensive on time and effort. Without the technicians, none of this is possible,” said Smith.

“Demi’s care was top-notch! I truly believe she was in the best hands. Our normal veterinarian, Dr. Bergeron from Highland Road Animal Hospital, was extremely confident when he recommended that we bring her to LSU. He was 100% correct. They saved our girl’s life. I’m very thankful for it,” said Meghan.