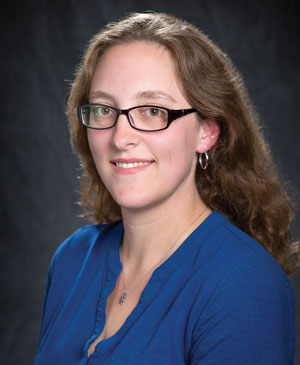 BATON ROUGE—Rebecca Christofferson, MApSt (LSU 2005), PhD (LSU 2011), assistant professor in Pathobiological Sciences (PBS) with the Vector-borne Disease Laboratory at the LSU School of Veterinary Medicine, has been awarded a research grant provided by the National Institutes of Health (NIH)/National Institute of General Medical Sciences for $1.2 million to study the mosquito-borne viruses, Zika and chikungunya. Both viruses have recently emerged in the Western Hemisphere. Most notable is the recent spread of Zika to more than 60 countries in South and Central America, and its link to birth defects, such as microcephaly. The grant period is from September 1, 2016 – August 21, 2019.

The project is entitled, “Characterization of temperature-driven heterogeneity in mosquito populations, the mosquito-arbovirus interaction and subsequent effects on transmission.” This project aims to investigate the effects of different temperatures on various mosquito life history traits, such as lifespan, and on the dynamic process of vector competence of chikungunya virus and the newly emergent Zika virus in their primary vectors (Aedes aegypti and Ae. albopictus). The results of these experiments will be used to develop and parameterize mathematical models to quantify the subsequent effects of temperature variation on mosquito population structure and ultimately arbovirus transmission. Dr. Christofferson is collaborating with colleagues at the University of New Mexico (UNM), who will prepare these mathematical models. A portion of the funding will go to UNM for their efforts at the discretion of Dr. Christofferson, the primary investigator for this project.

In addition to receiving the grant, Dr. Christofferson and Anna B. Kawiecki, PhD student in PBS, have been published in the Journal of Infectious Disease for their research entitled, “Zika-induced antibody response enhances dengue serotype 2 replication in vitro.”

Dr. Christofferson was also mentioned in an article by The Washington Times entitled, “Baton Rouge flooding renews West Nile fears as Zika flusters Florida,” for her expert knowledge and familiarity with mosquito-borne viruses.

Dr. Christofferson also participated in a Q&A with the LSU Science Blog discussing the 2016 Louisiana Flood and how important safety precautions are, especially with the increase of mosquitos and other disease-carrying insects due to the humid air and influx of water.

“Flood waters flush out mosquito larva that have already been there but leave behind lots of standing water that is prime real estate for mosquito breeding. People cleaning up can help mitigate this by getting rid of any sources of standing water they see in or around their homes,” said Dr. Christofferson. “So to everyone: Wear a mosquito repellent with DEET. The EPA has a website that will match you with the appropriate repellent. Re-apply as you sweat and dump out standing water around your homes.”

There have been no reported cases of the Zika virus directly transmitted from mosquitos in the state of Louisiana, but precautions can protect people against the possibility of transmission.

First identified in the late 1940s in Uganda, Zika expansion has followed a similar path as chikungunya virus, another virus Dr. Christofferson studies, which also emerged in the Americas in 2013-2014. Though Zika is related to dengue, which is endemic to Central and South America and some parts of the Caribbean, it does not cause (usually) hemorrhagic manifestations. However, it is known to cross-react with your immune system if you’ve had dengue before. Dr. Christofferson and her laboratory are currently investigating what this cross-reaction might mean in terms of enhanced disease or protection upon subsequent exposure of one virus after another. Dr. Christofferson is also interested in determining what factors are most impactful to the successful emergence and continue transmission of Zika and other arboviruses, both within the mosquito and vertebrate hosts.

To learn more about the Zika virus, or necessary precautions one should take if traveling to Zika affected areas, please visit https://www.cdc.gov/zika/.