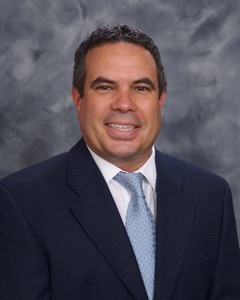 “I bring a different perspective and background to the AVMA presidency. I believe I can make a difference,” said Dr. Arce, who graduated from the LSU SVM in 1997.

Four of his top priorities as AVMA president include:

Although Dr. Arce has held many leadership roles within the AVMA, including serving as a House of Delegates Alternate Delegate and Delegate from 2000-2014 and on the AVMA Board of Directors since 2014, his route to the top post of a 95,000-member national association whose mission it is to “protect, promote, and advance the needs of all veterinarians and those they serve” was not a direct one. His record of career achievement combined with an affable nature have afforded him an easy humility that eludes many.

“I got into the LSU SVM on my second try,” said Dr. Arce, who earned a bachelor’s degree in Animal Science also from LSU.

As an undergraduate, he worked at the Life Sciences building feeding animals and cleaning their cages, at the LSU Dairy Farm, and at the LSU SVM mostly cleaning test tubes and laboratory equipment. He racked up extra hours on weekends and evenings if that’s when he was needed. After not getting accepted into the veterinary school on his first try, he worked as a volunteer for a year at the SVM, rotating through the various specialty services, where he gained a reputation as a hard worker. Simultaneously, he took higher-level courses to improve his GPA, replacing previous C grades with A’s.

“During my first years of undergraduate school, I did not have the best grades. I enjoyed going to New Orleans a little too much,” he said with a laugh.

Dr. Arce credits his stubborn nature with keeping him focused on his goal of becoming a veterinarian. “It’s what I wanted, and I was determined to do it,” he said.

For as long as he can remember, being a veterinarian is what he wanted, although the only pets he had growing up were fish in aquariums. Summers and weekends were different. He spent his summers in Spain on his grandfather’s farm, and he spent a lot of weekends on his godfather’s farm in Puerto Rico. As an undergraduate at LSU, he kept cats as pets, hiding them in his apartment that did not allow pets. He truly believes living among pets makes his life better.

“I always found a way to be around animals. I know it sounds kind of corny, but, yes, I always knew I would be a veterinarian,” he said.

He worked hard to achieve his lifelong goal, waiting tables and working in Baton Rouge bars while volunteering at the SVM and keeping up with coursework. He also worked as a veterinary assistant at Burbank Veterinary Hospital, served as president of the Pre-Vet Club and as student senator to the LSU Student Government Association. After obtaining his bachelor’s degree, he worked as a research assistant at the Caribbean Primate Research Center.

“I loved working. I was particularly excited to be in the middle of the action in a veterinary medical school. If they needed somebody on a night or during the weekend, they could count on me to go in,” he said.

According to Dr. Arce, he wouldn't be a veterinarian without some of his SVM mentors like Drs. Joseph Taboada, Sandy Merchant, and Martha Littlefield, who challenged him to be his best. The late Dr. Peter Haynes, the LSU SVM’s fifth dean and one of its early faculty members, was also instrumental in his involvement in veterinary medicine’s professional associations that advocate for all within the profession.

“José was a pre-veterinary student working in the small animal clinic shortly after we arrived at LSU. Even then you could tell he would be a leader in his community and within the profession someday. Truly one of our very favorites. He will represent LSU well in the AVMA just as he has represented us well his whole career. Sandy and I are so excited about Dr. Arce becoming the new AVMA President-Elect,” said Joseph Taboada, DVM, DACVIM, Associate Dean for Veterinary Education at the SVM.

Dr. Taboada and Dr. Merchant came to know what kind of person he was—reliable, capable, and hardworking. They recommended him for admission.

“It took me longer than many to get into veterinary school, but I wouldn’t change it for the world. If it hadn’t, I wouldn’t have met my wife and business partner,” he said.

Three weeks after he and Anik Puig graduated together from the LSU School of Veterinary Medicine in 1997, they packed up a U-Haul, drove to Massachusetts, flew to Puerto Rico to get married, honeymooned, and returned to Massachusetts for year-long internships in small animal medicine, surgery, and emergency medicine at Rowley Memorial Animal Hospital in Springfield.

Just back from Puerto Rico, the young couple unwittingly ended up interning in an inner-city community that was 50 percent Puerto Rican and comprised of descendants of papermill workers and tobacco growers who immigrated to Massachusetts between the 1930s and 1950s. When most of the papermills went bankrupt by the 1960s, poverty set in for many residents. Most had little education. The older generation could barely speak English, while it wasn’t unusual to see the younger generation sporting $300 tennis shoes and attitudes toward their parents and grandparents, according to Dr. Arce.

“I worked with the people in the community and participated in the Latino Breakfast Club, where I helped educate Hispanics on topics such as ending the dog fighting rings that went on there. They needed help, and I could reach them and connect with them. I did it by talking to them about pain and suffering, how animals made to fight suffered,” he said.

He also spoke regularly to community members about responsible pet ownership, vaccination, spay/neuter, and the proper care of animals.

In 1998, Dr. Arce moved back home to Puerto Rico, the place he was raised by his Spanish mother and Puerto Rican father, an ophthalmologist.

“I always wanted to move back,” he said. When he returned, he worked as a veterinarian at the Avian and Small Animal Hospital, San Juan Municipal Shelter, Dorado Veterinary Hospital, and the Diaz Umpierre Veterinary Clinic.

In 2003, he and his wife Anik founded Miramar Animal Hospital, of which he is president and co-owner and has a special interest in dermatology, ophthalmology, and ultrasonography.

“Jose is very talented and has been working his entire career for this. As always, I know that he will devote all of his time and resources to make his term as AVMA president a successful one. I am very proud of him and look forward to what the next few years will bring,” said Dr. Puig, who was born in France of a German mother and Spanish-Cuban father, has lived in Spain, New Orleans, Massachusetts, and now Puerto Rico.

Several students enrolled in the LSU SVM have interned with the couple throughout the years, including present students Alexandra Morales and Cristina Sanchez, and 2020 graduate Nicolas Garcia Abarca. Next year, the couple intends to hire another veterinarian since Dr. Arce expects to travel around 150 days out of the year when he takes on his new role as AVMA president.

“I enjoy talking to people, particularly young people: they energize me. My favorite is talking to students during the SAVMA Symposiums,” said Dr. Arce.

He believes animals help people of all ages understand many things about life.

“They help teach kids about the cycle of life. I tell parents who are facing euthanasia of a pet not to lie to their kids about the reality of what’s happening. Their experience of dealing with death through their pets is helpful, and I welcome parents bringing their kids, if they want, when a pet is euthanized,” he said.

Dr. Arce possesses a talent for interacting with peers to get things done. In those settings, he gets as much as he gives, he says. It comes naturally to him. Growing up, his father took young Jose to medical conventions both in Puerto Rico and on the U.S. mainland where they attended meetings of the American Medical Association.

Dr. Arce has steadily amassed an impressive collection of leadership roles. Active in the Colegio de Medicos Veterinarios de Puerto Rico (PRVMA), he joined its Ethics and Grievances Committee in 1998. In 1999, he was selected to represent the PRVMA to the AVMA Leadership Conference. In 2000, he was elected as the Alternate Delegate to the AVMA House of Delegates, and in 2010 he was elected Delegate. In 2014 he was elected as District IV Director to the AVMA Board of Director, representing Florida, Georgia, and Puerto Rico. His term expired last Friday, July 31, the day he was elected President-Elect of the AVMA.

Dr. Arce has been a Board member of the PRVMA since 2000. There, he works with SVM alumni, Dr. Blanca Colón (class of 2011) who is President of the PRVMA Continuing Education, and Dr. Juan Pablo Amieiro who now serves as Puerto Rico’s Delegate to the AVMA HOD. Since 2001, Dr. Arce has been an active member of the PRVMA’s Legislation Commission, of which he has been secretary and President for the past four years and has lobbied actively for the passage of legislation dealing with veterinary medicine matters with local senators and representatives, as well as with members of the U.S. Congress on behalf of the AVMA. He is also the President of the PRVMA’s Convention Committee and has helped achieve record number of participants in their annual conventions.

“I am thrilled to hear that Dr. Arce has been named the President-elect of the AVMA. He has been a strong advocate and ambassador for the profession and more specifically the School of Veterinary Medicine at LSU for many years. He will do a fantastic job as President of the AVMA, and I look forward to working with him,” said Joel Baines, VMD, PhD, dean.

Dr. Arce continually cultivates his connection to the SVM, visiting each fall. In 2009, he participated in the SVM Stakeholders Summit, a gathering to discuss the SVM’s role in the changing profession of veterinary medicine and how to position the school to serve future needs. He served on the LSU SVM Dean and the LSU Chancellor search committees.

“The vet school holds a special place in my heart. I’m very proud of it and it’s accomplishments,” Dr. Arce said.

In 2011, Dr. Arce was chosen and took part in the AVMA House of Delegates Leadership Development Program. In 2012, he was selected and participated in the AVMA Summit on Governance.

When not contributing to the advancement of veterinary medicine, he plays soccer for fun and to relieve stress. He has served as director of the Puerto Rico Masters Soccer League (over age 35) and is team President of the Club Internacional de Fútbol. And, he’s a staunch LSU Tiger fan, having served on the LSU Student Athletic Advisory Committee.

The Arces have one son, Diego, who now lives in Worcester, Massachusetts, and is attending Becker College, where he studies Game Design.

“The LSU School of Veterinary Medicine has played a very important part in shaping the person I am today, and it will always be a part of my life. Faces may change, and only a few of the professors that taught me are still there, but the spirit of the LSU SVM will remain with me forever,” Dr. Arce said.

About the LSU School of Veterinary Medicine