John Hawke, PhD, professor, has developed a vaccine that protects fish against Francisella sp., an emergent bacterial pathogen that causes acute to chronic disease in warm-water-cultured and wild fish species, such as tilapia. Francisella has been implicated as the cause of mortality in warm and cold water species of fish in the U.S. (including Hawaii), Taiwan, Costa Rica, Latin America, Norway, Chile and Japan. Fish raised in high-density environments, such as tilapia farms, are more susceptible to outbreaks of the disease. Francisellosis causes high mortality in warm water fish farms. The emerging disease is characterized by granulomas in the liver, spleen and kidney of fish maintained in 22-28° C water.

The vaccine is to be applied by immersion to 1-month-old tilapia fingerlings and should afford protection for at least one year. For fish vaccines to be economical, they need to be administered directly into the water rather than injected directly into each fish; the fish take in the vaccine bacteria through the gills and skin, from which they enter the bloodstream.

Dr. Hawke is seeking to partner with a commercial vaccine company to produce and market the vaccine. The vaccine is a live-attenuated mutant form of the parent strain that has a site-directed mutation in the iglC gene located in the Francisella pathogenicity island of the Francisella chromosome. The live-attenuated mutant that comprises the vaccine strain is capable of infecting and causing a mild form of the disease in young fish but is cleared in a short period of time. The induced immunity is characterized by both a heightened cellular and humoral response. Some of the research to develop this vaccine was conducted as part of the dissertation of Esteban Soto, PhD (LSU SVM 2010), who is now on faculty at Ross University in St. Kitts.

In 2010, global production of tilapia was estimated to be 3.7 million tons, according to the Food and Agriculture Organization of the United Nations. Tilapia can be produced in versatile locations, water systems, temperatures and salinities. They grow fast, have a high fillet yield and low feed-conversion ratio, as well as firm, white fillets that make tilapia easy to market. 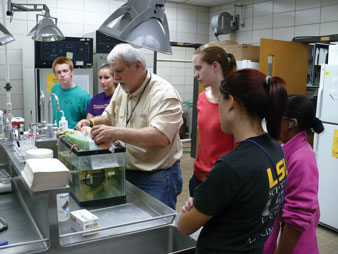 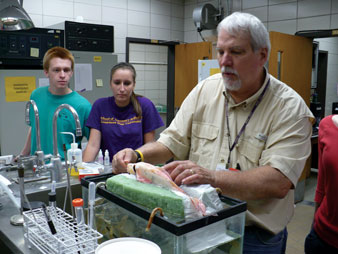 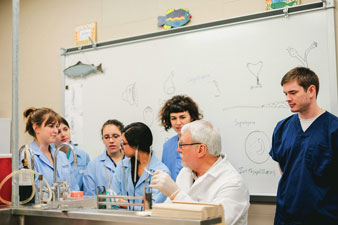 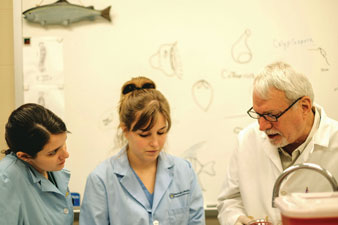