LSU Chapter of Phi Eta Sigma’s past-president (2013-2015) Andrew Mahtook received the highest national honor as the eleventh recipient of the Thomas Arkle Clark Scholar-Leader of the Year Award, providing $10,000 for graduate study for the 2016-2017 academic year. Mahtook will be attending law school at Tulane University in New Orleans, La.

“Andrew has made outstanding contributions to LSU and the local community. I have known him for four years and have found him to be what Phi Eta Sigma exemplifies: strength, integrity, and outreach at its core,” said Jacquelyn Schulz Craddock, assistant director of development and public relations of LSU University College and advisor of LSU Chapter of Phi Eta Sigma. “I look forward to seeing what Andrew will accomplish in law school, because he took undergraduate school with brilliant fervor, and LSU will forever be the greater for it.”

The Thomas Arkle Clark Scholar-Leader of the Year Award is given in honor of Dean Thomas Arkle Clark, dean of men at the University of Illinois and Senator of Phi Beta Kappa, was one of three founders of Phi Eta Sigma and the first Grand President, serving from 1927-1933.

“I first met Emily when she came to LSU and was inducted in LSU’s Chapter of Phi Eta Sigma. Later, Emily showed great initiative, running for a chapter officer position. Through this opportunity, she and I have had the opportunity to work closely together, even attending the national convention in Charleston, South Carolina together,” said Craddock. “Emily is a remarkable young lady, with amazing potential. She demonstrates Phi Eta Sigma’s coat of arms, ‘Knowledge is Power,’ in multiple facets of her life.”

The Archie L. Lejeune Scholarship is given in honor of Mr. Lejeune’s service as chapter adviser at Louisiana State University for 36 years. Lejeune was a recipient of the Phi Eta Sigma Distinguished Service Award in 1984, and served as host for the 1970 national convention. 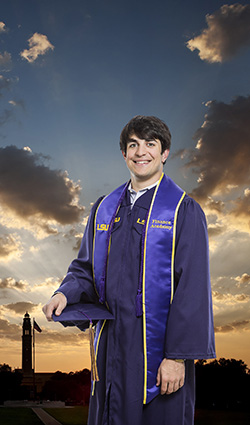 Mahtook will graduate LSU with a higher than 3.94 cumulative GPA, majoring in finance. He currently holds the E. J. Ourso College of Business class rank of 19 out of 912 students, and the Department of Finance rank of 5 out of 137 students. He was selected for many competitive scholarships, including the Sean O’Keefe Leadership Award, Tiger Twelve, IFC Greek Man of the Year, Phi Kappa Phi Most Outstanding Senior Award, Star and Crescent Foundation of Louisiana Endowed Scholarship, Roland Kizer Student Body President Scholarship, Kappa Sigma Scholars Award, Charles McClendon Memorial Scholarship, and the Academic Scholars Resident Award.

Mahtook’s strong leadership skills are demonstrated by his selection by LSU’s student body to be Student Government’s President (2015-2016), leading more than 35,000 students and serving as Chief Executive Officer of a 250-member student government. Under his leadership, he has instituted a number of student driven bills, as well as amplified LSU’s student body voice in numerous committees and meetings. For example, he created the first Director of Diversity and Director of Philanthropy positions to increase the impact of student government across campus. Likewise, he has introduced an initiative to provide free legal services for students, resulting in LSU’s President F. King Alexander supporting this vital resource. The initiative is currently in implementation phase.

“In my journey to become LSU’s student body president, a huge part of my campus development was my involvement in Phi Eta Sigma,” said Andrew Mahtook. “Our advisors always challenged us to find ways to improve the campus for everyone. Phi Eta Sigma has allowed me to broaden my impact on the LSU campus by putting me in the position to lead and serve my fellow students and school. I view my university in a new mindset. Instead of looking to see what I can get from LSU, I now look to see what I can give to it.”

Mahtook’s strength and integrity is reinforced in his expanded role as president to create a student body voice regarding Louisiana’s state of affairs in higher education. Over Mahtook’s tenure as a student, Louisiana has had numerous crippling state budgets, cutting deep trenches into higher education budgets. Mahtook has planned and implemented numerous student rallies at the state capitol, testified in front of the Ways and Means Committee and the Appropriations Committee on numerous occasions in defense of higher education, and created the LSU Student Advocacy Commission as a grassroots vehicle to increase student involvement and impact in state politics, budgets, and decisions.

In addition to his academic pursuits, Mahtook is also actively involved in other aspects of campus life, including membership in the Greek community with Kappa Sigma and honor societies such as Omicron Delta Kappa Honor Society, Alpha Lambda Delta Honor Society, and the Order of Omega Greek Honor Society.

Mahtook’s dedication to his community is also evidenced by his volunteer service and outreach. Mahtook, as president of LSU’s Chapter of Phi Eta Sigma, led the dialogue and implementation of Phi Eta Sigma’s involvement in LSU Spring Greening Day 2015. This event is a tradition for LSU students, faculty and staff to assemble in teams to beautify the expansive grounds of LSU’s campus and community.

Mahtook’s dedication to community and outreach extends beyond the Phi Eta Sigma service. He has been instrumental in leading many LSU campus-wide student service-learning initiatives, including building entire homes for families through Habitat for Humanity, organizing early childhood education/literacy efforts with the Kindergarteners Learn to Read program, or planting Satsuma trees across campus for healthy snacks/sustainability food efforts. He is a dedicated and outstanding volunteer who has made valuable contributions to his LSU and Baton Rouge community.

Riley, native of Dumas, Ar., has received numerous awards and honors for her LSU academic achievements, including multiple President’s Honor Roll and Dean’s List honors. She was selected for the Tiger Excellence Non-Resident Scholarship, a LSU institutional four-year award for her high school academic success and promise of excellence at LSU. To date, Riley has maintained academic excellence and remains a beacon of this scholarship with an overall 3.95 GPA, majoring in biochemistry with minors in chemistry and sociology. In addition to this scholarship, Riley was awarded the S-STEM Scholars, which honors high achieving students that excel in science, technology, engineering and mathematics. 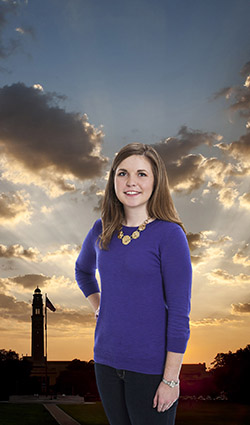 “Joining Phi Eta Sigma has truly been a rewarding experience. This honor society is a merit-based program that rewards students for their very high achieving academics. It’s wonderful to know that all of my hard work is noticed by this prestigious honor society at LSU,” said Emily Riley. “As an officer, I had the privilege to attend and to represent LSU at the 2014 National Convention. It was a remarkable opportunity to meet other students from various chapters around the country. Our impact collectively, yet my responsibilities individually as a leader and decision maker in shaping the future of Phi Eta Sigma, means a great deal to me.”

Riley is also actively involved in other aspects of campus life. She is co-president of the National Society of Leadership and Success at LSU, and a member of Phi Eta Sigma, Alpha Lambda Delta, Alpha Epsilon Delta Medical Honor Society, and Phi Kappa Phi.

Riley was additionally selected to serve on LSU University College’s Outstanding Teaching Awards Selection Committee. As a student-servant on this committee, she worked alongside past LSU alumni and faculty, business leaders, CEOs, and community activists, to review competitive award packages for LSU.

Phi Eta Sigma is a national honor society rewarding first-collegiate-year scholarship. Since 1928, the LSU Chapter of Phi Eta Sigma has inducted more than 10,828 students. The goal of the society is to encourage and reward academic excellence among full-time, freshmen students in institutions of higher learning, who have a minimum 3.5 cumulative grade point average.  Inductees receive national recognition, membership, and undergraduate and graduate scholarship opportunities of over $300,000.