LSU petrologist Darrell Henry, together with a team of petrologists and crystallographers from Canada and Japan, have discovered maruyamaite, the first tourmaline species that is both diamond-bearing and potassium dominant. An article detailing this finding will appear in the upcoming issue of American Mineralogist.

“Normally, tourmaline contains very little potassium, but the unusual high-pressure environment and potassium-rich melts that these rocks have experienced contribute to the formation of this unusual species,” said Henry, LSU Campanile Charities Professor in the Department of Geology & Geophysics.

Henry added that the discovery of diamond in tourmaline shows that the species can develop at extreme pressure conditions in the crust of the earth where two continents have collided to push near-surface rocks to depths of more than 80 miles.

Maruyamaite was found in northern Kazakhstan and is named in honor of Shigenori Maruyama, professor in the Earth-Life Science Institute at the Tokyo Institute of Technology, Japan, and prominent figure in the regional geology of Kazakhstan. Maruyama led the project, which unraveled the manner in which the ultra-high pressure rocks were formed. Maruyamaite was approved by the International Mineralogical Association Commission on New Minerals and Mineral Names in 2013.

Darrell Henry is the first at LSU to have a mineral named in his honor. Darrellhenryite, discovered by geologists from the Czech Republic in 2014, has been found to hold information that could help scientists reconstruct the overall history of the earth, including mountain building, the formations of basins and even the origins of natural resources like oil, gas and metal 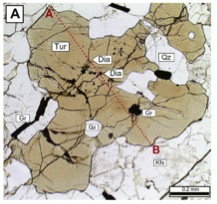 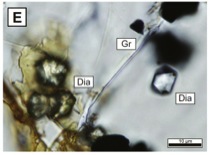