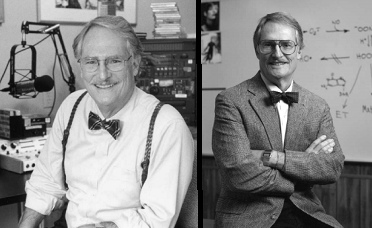 William A. Pryor was Thomas & David Boyd Professor of Chemistry and Director of both the Biodynamics Institute and the Pennington Biomedical Research Center at LSU.  Dr. Pryor's research group was supported by grants from the National Institutes of Health, the National Science Foundation, and the National Foundation for Cancer Research, the Environmental Protection Agency, the Health Effects Institute, U.S. Army and Air Force, and a substantial number of national and international corporations.  Research grants awarded to Dr. Pryor exceed $60 million.

Dr. Pryor grew up in Los Angeles and after grammar school and junior high, skipped high school and went to the University of Chicago where he obtained a Ph.B.in philosophy in1948 and B.S. in chemistry in  1951, and then was awarded a Ph.D. in chemistry in 1954 from the University of California (Berkeley).  His hobbies include biking, reading modern history, and classical music and jazz. He played in a jazz band while at the U. of Chicago, has hosted a Public Radio program named Classic Jazz for more than 50 years, starting in Chicago, then in San Francisco, and now in Baton Rouge. He has published articles on jazz history and criticism, some of which are listed in his publications below.

Professor Pryor was a pioneer in the field of free radical research. His study of hydrogen atom transfer from thiols to radicals led to a publication that remains the simplest experimental demonstration of the Westheimer effect (which explains why the maximum kinetic isotope effect is observed in the most symmetrical atom transfer reaction), a paper designated a Citation Classic by the ISI. In the 1960's, he contrasted the displacement reaction on peroxides and disulfides by anions with those of radicals, and showed that radicals perform a “backside”, Walden inversion displacement reaction.

Dr. Pryor is an expert on oxidative stress and the use of the antioxidant vitamins in human health. Following the discovery of the enzyme superoxide dismutase in the 1960's, Dr. Pryor became the first free radical chemist to apply insights from organic free radical chemistry to the study of radical reactions in biology and medicine.  He studied the oxidants and toxins in smog, including  ozone, nitric oxide, nitrogen dioxide, peroxynitrites,  peroxynitrates, and fine particulate matter.His research on ozone showed it is too reactive to penetrate far enough into cells to cause the effects that had been attributed to it.  Instead, ozone reacts with the first reactive species that it contacts when it first enters the lung; those species are the unsaturated fatty acids present in the lung epithelial cell lining fluid (ELF).  Ozone reacts with unsaturated lipids in the ELF to produce lipid ozonation products (LOP), and it is these LOP that act as biological signal transduction species and relay the inflammatory and ancillary effects of ozone into deeper tissue strata than ozone itself can reach.

In 1975, Dr. Pryor’s showed that the autoxidation of polyunsaturated fatty acids produces the important signaling molecules called prostaglandins (PG), but that this autoxidation leads to PG isomers with different (“unnatural”) stereochemistry from the PG produced by our PG-synthesizing enzymes.  He predicted these iso-PG compounds would have biological activity in a paper became an ISI Citation Classic and is one of the 400 all-time most cited papers in the life sciences, as ranked by the Council of Biology Editors.  In the past decade, a number of groups have demonstrated that iso-PG are indeed produced in animals and humans, and that several iso-PG compounds have very potent biological properties.

MERIT Award from NIH (Dr. Pryor was the 1st)

Dr. Pryor was one of the first four scientists granted a MERIT Award from the National Institutes of Health, an award created to insure continuous funding for outstanding scientists. Dr. Pryor has been awarded some 25 national and international medals and honors, including three awards from the NIH.  He also was awarded five medals by the American Chemical Society including the 2000 Gustavus John Esselen Award for Chemistry in the Public Interest.

Dr. Pryor is the author of nearly 1,000 articles, letters, and notes, and the author or editor of more than 30 books that have been translated into many languages including Russian and Japanese. One of his books, Free Radicals was the first textbook on free radical chemistry and is an Institute for Scientific Information (ISI) "Citation Classic" by computer analysis.  He was the Founding Editor of Free Radical Biology & Medicine, the major journal on oxidative stress, and he served on the Board of Editors of numerous other journals in the fields of chemistry, biology, nutrition, and gerontology, including flagship journals of many societies.  One of Dr. Pryor’s publications has been identified by the Council of Biology Editors as one of the 400 all-time most cited papers in the life sciences.