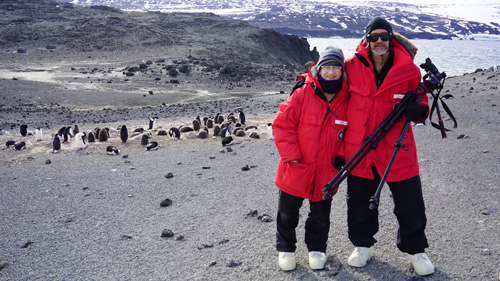 LSU Department of Biological Sciences Professor Vince LiCata and Department of Communication Studies Associate Professor Trish Suchy received a National Science Foundation Antarctic Artists & Writers grant for a project in Antarctica in January and February. They are currently on the continent and are working with scientists and staff at the U.S. Antarctic Program’s research center, McMurdo Station, on a project called “Antarctica: Persistence of Vision.” They are recreating modern versions of some of the most iconic photography of the Antarctic continent captured more than 100 years ago.

Antarctic expeditions during the “Heroic Age” almost always included a photographer to document the landscape, the people and the discoveries made by explorers and scientists such as Robert Falcon Scott, Edward Adrian Wilson, Roald Amundsen and Ernest Shackleton. Suchy and LiCata aim to use modern researchers and staff at McMurdo Station to re-enact some of these iconic photos – but with a few twists. The subjects of the Suchy-LiCata photos will be in their modern winter gear, working in state-of-the-art laboratories and research facilities and will showcase the now internationally diverse group of people that work on this remote continent. For example, while a photo from the 1910 Terra Nova Expedition shows a dog sled and explorers in heavy wool coats, the Suchy-LiCata photos will show scientists with a snowmobile in modern parkas doing research at the same location.

The second twist will be the way the modern scientists and staff are photographed. Using artistic techniques with which artists like Bill Viola and Robert Wilson have experimented, Suchy and LiCata plan to make high-definition “video portraits,” where the image at first looks like a photograph to the viewer, but upon closer inspection is seen to be slowly moving. The team also plans to work on variations on the video portrait form, using modern technologies in place of historical photographer Herbert Ponting’s still cameras and cinematograph.

Suchy and LiCata have worked together on a number of different artistic and performance projects that combine art and science, and their deployment to Antarctica in January will culminate nearly three years of proposals, planning and preparation for this particular project. Upon return, they will assemble “Antarctica: Persistence of Vision” for exhibition, and are already in discussion with several interested art galleries. The National Science Foundation supports the Antarctic Artists & Writers Program as a way to foster communication of the value of ongoing research in Antarctica and further understanding of the continent. The Division of Polar Programs in the National Science Foundations’ Geosciences Directorate manages the U.S. Antarctic Program, through which it supports all U.S. government research in Antarctica and aboard ships in the Southern Ocean.