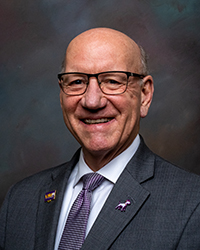 Dr. Paul D. Coreil was appointed Chancellor of LSU of Alexandria effective October 25, 2019 after being appointed Interim Chancellor of LSU of Alexandria effective June 1, 2019 and then Chancellor in October of 2019. He also served as the LSUA Interim Chancellor from February, 2013-February, 2014. His focus at LSUA has been on the development and implementation of a major LSUA Marketing Plan devoted to increasing university visibility, student enrollment, student retention, graduation rates and upon graduation - student career success. Prior to his LSUA appointment in 2013, he served in the position of Vice Chancellor of the LSU Agricultural Center and Director of the Louisiana Cooperative Extension Service (LCES), a position he held from September, 2001-February, 2013 when he officially retired and was named LCES Director, Vice Chancellor and Professor Emeritus by the LSU Board of Supervisors soon thereafter. He has also served in several previous positions within the LSU Agricultural Center, beginning his Extension career as a Sea Grant Assistant Area Agent in Fisheries and Wildlife for Cameron and Calcasieu Parishes in 1978. He also served as Parish Chair of the Cameron Parish Extension Service office from 1987-1992.

Dr. Coreil was appointed as Wetlands and Coastal Resources Specialist for LCES/Sea Grant in 1992 and served in that capacity until 1998. In 1998, he assumed the position of Wetlands Administrator for Burlington Resources (formally Louisiana Land and Exploration Company - L,L & E – the largest private coastal landowner in Louisiana), managing over 600,000 acres of fee title coastal wetlands owned by the company. In 1999, he returned to the LSU AgCenter as Assistant Director for Environmental Programs, a position he held until being named Extension Director in 2001. He served as Chair the Association of Southern Region Extension Directors in 2006; he also served as Chair of the eXtension National Governing Committee – a committee that oversees the development of a national web-based information system covering a variety of topic areas important to a diversity of public interests. Dr. Coreil also served as the Chair of the National Extension Committee on Organization and Policy (ECOP) in 2009.

Dr. Coreil received his Bachelors of Science in Zoology from the University of Southwestern Louisiana; both his Master’s Degree (in Wildlife Management) and PhD (in Extension Education) are from Louisiana State University. His Master’s research at Rockefeller State Wildlife Refuge in Cameron and Vermilion Parishes included a radio telemetry study of habitat preferences and activities of nutria in southwest Louisiana. His PhD research was focused on landowners’ perceptions related to wetland regulatory policy in coastal Louisiana. The recipient of numerous awards, Dr. Coreil received the Coalition to Restore Coastal Louisiana’s Coastal Stewardship (Professional Category) Award, the LSU AgCenter Chancellor's Diversity Leadership Award and the Association of Southern Region Extension Directors (ASRED) Excellence in Leadership Award. He currently serves on the Louisiana 4-H Foundation Board of Trustees and is a past member of the Board for the Louisiana Wildlife Federation. He was also inducted into the Louisiana 4-H Hall of Fame in 2015 and into the National 4-H Hall of Fame in 2017.

Dr. Coreil was born and raised in Ville Platte, Louisiana and has been married to Arlene Pitre Coreil, also from Ville Platte, for 45 years. They are the parents of 3 children; Abram Luke who is deceased, and two living adult children – Dr. Ashley Coreil Record, a dermatologist in Baton Rouge, and Adam Paul Coreil, a cyber security computer analyst for a major banking corporation in Dallas, Texas. Paul is an avid hunter and fisherman, spending as much of his free time at his lake house on Lake St. John in Concordia Parish. He enjoys volunteering for his church, supporting conservation and 4-H youth education related programs, and fundraising across the state. He has also been blessed with three wonderful grandchildren, Lillian, Abram, and Lucien.