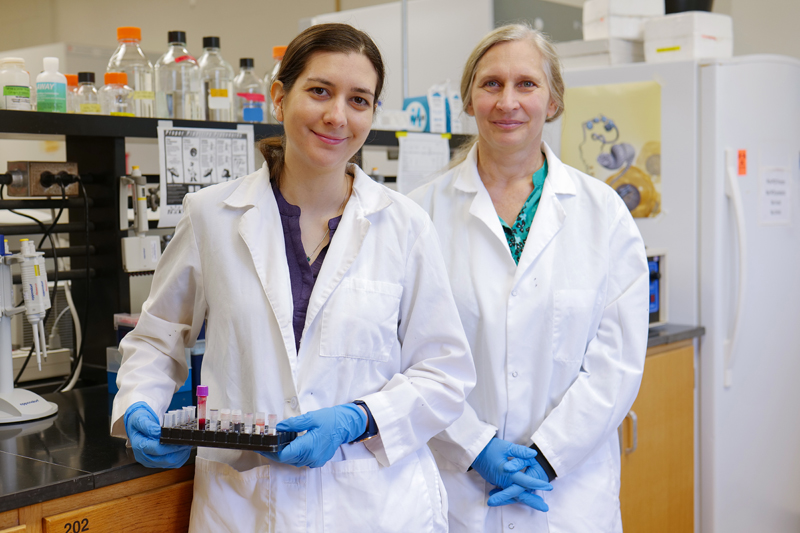 Graduate student Alessandra Bresnan, left, and Sabrina Taylor, LSU AgCenter researcher and professor in the LSU School of Renewable Natural Resources in Taylor’s lab. Under the guidance of Taylor, Bresnan is conducting research on tiger genetics. The Tiger Athletic Foundation will donate $250,000 during the next five years toward research that will complement these studies. Photo by Olivia McClure/LSU AgCenter

[7 June 2022]  Mike the Tiger is a major part of the heart and soul of LSU. Tiger pride runs deep on campus, and the LSU Tiger Athletic Foundation is turning its love of our tiger into research to benefit the species as a whole. TAF will provide funding for a doctoral student in the LSU School of Renewable Natural Resources to conduct genetic research on tigers.

TAF will donate a total of $250,000 during the next five years toward research that will complement studies already being conducted by Alessandra Bresnan, a doctoral student working with Sabrina Taylor, LSU AgCenter researcher and professor in the School of Renewable Natural Resources.

Bresnan is using DNA sequencing to get a better understanding of the genetic makeup of captive tigers in the United States.

“I will have 400 tiger genomes, and that includes tigers that are found in accredited zoos and ones in private hands in different facilities throughout the U.S.,” Bresnan said.

More tigers are in captivity in the U.S. than are found in the wild, and Bresnan said scientists don’t know much about the genetics of the captive population. She said there is an assumption that generic tigers — which are often found outside of accredited zoos — are either hybrids of several subspecies or are highly inbred and may not be genetically diverse.

“We want to get a snapshot of the population,” she said.

Tigers in zoos accredited by the Association of Zoos and Aquariums have pedigrees and follow species survival plans. Bresnan plans to use tigers’ genetic data to facilitate captive breeding and create a genetic baseline for the three subspecies with species survival plans: the Amur, Sumatran and Malayan tigers.

Bresnan expects to find a lack of genetic variation in some of the sampled generic tigers.

“If your population is invariant, so everybody is kind of the same genetically, then when change comes along such as disease or differences in climate, it means the population has less potential for adaptation,” Taylor said. “That’s not great for their future resiliency.”

Environmental differences may drive genetic differences among subspecies in their home ranges. So when an Amur tiger is crossed with a Sumatran tiger, it cannot be reintroduced because it would be unsuited to either of the native ranges, Bresnan said.

Bresnan’s research is funded by LSU through the Tigers United University Consortium, which is made up of LSU, Auburn, Clemson and Missouri — all universities with tiger mascots. The other consortium universities fund research on wild tigers.

“The U.S. has a problem of its own with tigers that probably needs some attention,” Taylor said. “Very little is published on that, so we thought that was an important area to focus on.”

Using Bresnan’s data, researchers will have a better grasp on captive tigers’ genetics in the U.S., a valuable baseline for future tiger research.

“By funding the next Ph.D. student, not only is TAF finding a way to give back to the academic side of LSU but also supporting the beloved symbol of the LSU community,” said Matt Borman, CEO of the Tiger Athletic Foundation. “We are also proud that this initiative is working in conjunction with other institutions in the SEC for a mission that is bigger than ourselves.”

Tiger fans looking to get involved can contribute to the Mike the Tiger’s Habitat fund through the TAF at www.mikethetiger.com, which supports regular maintenance and upgrades to Mike’s habitat.