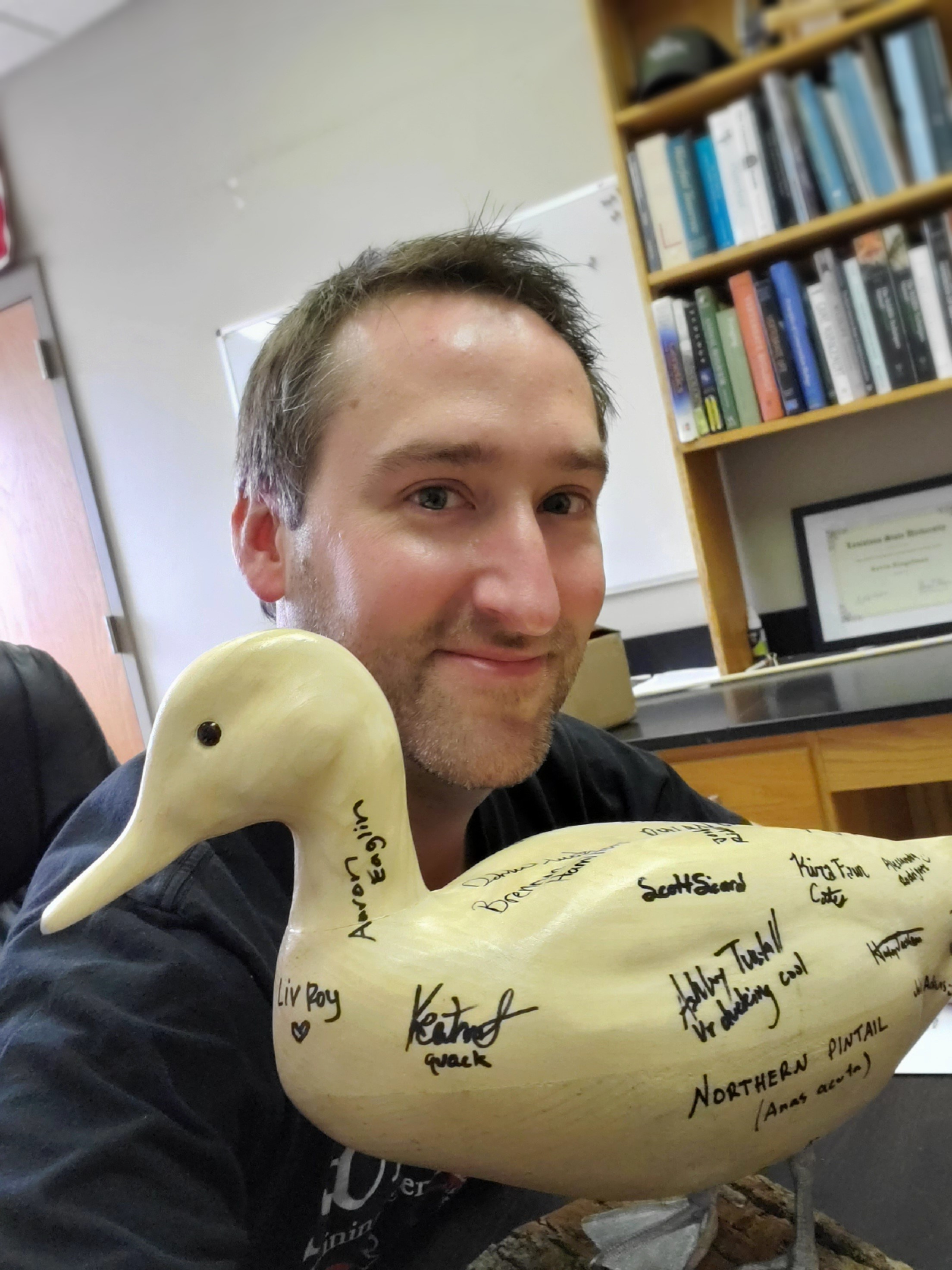 LSU AgCenter researcher Kevin Ringelman, shown here with a duck carving given to him by his students, has been awarded the prestigious H. Dale Hall Ducks Unlimited Endowed Professorship in Wetlands and Waterfowl Conservation.Photo by Kevin Ringelman/LSU AgCenter

[8 Dec 2021] Kevin Ringelman, associate professor in the LSU School of Renewable and Natural Resources, has been named recipient of the prestigious H. Dale Hall Ducks Unlimited Endowed Professorship in Wetlands and Waterfowl Conservation.

Named after LSU College of Agriculture alumnus and former director of U. S. Fish and Wildlife Service under George W. Bush, the endowment seeks to “perpetuate a faculty position in the LSU School of Renewable Natural Resources, supporting excellence in teaching, research and public service in waterfowl ecology, waterfowl habitat management or wetlands conservation, in cooperation with Ducks Unlimited and other partners.”

As one of nine endowed waterfowl chairs/professorships in North America, this is the only one in the United States to be associated with Ducks Unlimited, Inc., widely recognized as a world leader in wetland and waterfowl conservation.

“One of the central responsibilities of the H. Dale Hall Professor is to make sure the management decisions of Ducks Unlimited and our agency partners are founded in strong and transparent science,” Ringelman said.

Ringelman, who has pursued waterfowl science since 2007 when he attended graduate school at the University of California, Davis, has an impressive background, which includes 30 peer-reviewed papers on the subject and 60 conference abstracts. Since starting at the LSU AgCenter in 2014, his grants in support of waterfowl research exceed $1.6 million, including substantial financial support directly from Ducks Unlimited.

Nearly 100 LSU undergraduate and graduate students have taken Ringelman’s course on waterfowl and ecology management, and his materials are widely shared for use in courses from Colorado State University to the University of Delaware, as well as other universities throughout the U.S.

"My research and training priorities have always been closely aligned with those of Ducks Unlimited,” Ringelman said. “And it's a great honor to represent the legacy of Dale Hall and the Ducks Unlimited conservation mission."

The H. Dale Hall Ducks Unlimited Endowed Professorship in Wetlands and Waterfowl Conservation is awarded for three years and is renewable.