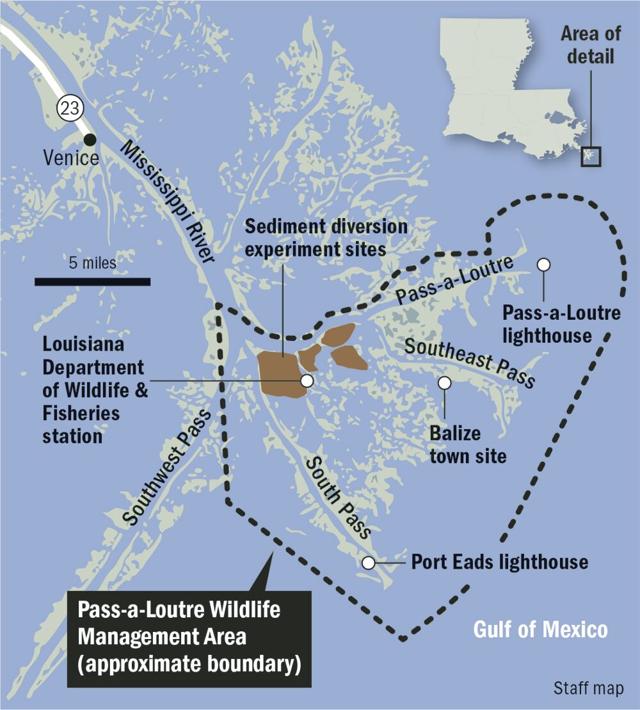 Pass-a-Loutre Wildlife Management Area: Pass-a-Loutre, the state’s first wildlife management area, turns 100 this year. The 115,000-acre site at the mouth of the Mississippi River might not last another 100 years due to rapid land loss. staff Nola.com Map

[18 August 2021] Andy Nyman never manages to get lost as he speeds his boat through a maze of passes and channels that splay across the last marshy reaches of the Mississippi River Delta.

The wetland scientist knows his way around the remote Pass-a-Loutre Wildlife Management Area not so much because he’s been coming here for decades but because he comes frequently enough to keep up with the changes. He points them out everywhere: a ribbon of grass where 35 years ago was a forest of cypress “that went on forever”; an oil pipeline that was hidden by marsh but now hovers over encroaching water; and at the edge of it all, where a river channel meets the Gulf of Mexico, a Civil War-era lighthouse that not so long ago had a front door partially visible above the waves.

“In the 1980s, there was still a path to the door,” said Nyman, who teaches wildlife and wetland ecology at Louisiana State University. “Now you can’t even see the door.“

Pass-a-Loutre, Louisiana's oldest wildlife management area, turns 100 this year, but there’s little hope it’ll last another century. Rising seas, sinking soil, hurricanes, a dwindling supply of river sediment and a recent invasion of marsh-devouring insects are among the factors that have pushed Pass-a-Loutre into rapid retreat.

Pass-a-Loutre covers a 115,000-acre triangle on the east side of what’s known as the bird's foot delta. It stretches from the much smaller Delta National Wildlife Refuge to Southwest Pass, the main route for Mississippi ship traffic.

Brimming with wildlife, Pass-a-Loutre is a hotspot for duck hunters and anglers who have the time and resources to get to the state’s most remote stretch of public land, some 80 miles south of New Orleans and 12 miles from the nearest road.

“We don’t really have wilderness in Louisiana, but that area’s about as close to untouched as you can get in our state,” said Todd Baker, a biologist with the state Coastal Protection and Restoration Authority. “And the habitat is like no other place in North America.”

Pass-a-Loutre, French for otter pass and pronounced "pass-uh-LOOT" by locals, is a meeting of two watery worlds, where river plants and animals mix with saltwater ones, producing a rich and diverse ecosystem. Overlapping it all is a bird superhighway. Each spring, several million birds from more than 300 migratory species cross the Gulf and make a pit stop in and around Pass-a-Loutre before continuing north along the Mississippi Flyway.

It was the area’s bounty of birds - and people’s desire to shoot them - that led the state in 1921 to designate Pass-a-Loutre one of the country's first public hunting grounds.

“This was the first time any state attempted to balance and manage property for both wildlife and hunting and fishing,” said Baker, who spent several years working for the state Department of Wildlife and Fisheries. The conservation movement of the early 20th century spawned many wildlife refuges, but most had a “hands off” approach to public access. Meanwhile, many of the best hunting grounds were being gated off as playgrounds for the wealthy.

“There was a plea from hunters because all the good property was being gobbled up,” Baker said. “Pass-a-Loutre was to be the first area for the common man to hunt.”

But putting these founding ideals into practice was complicated by some Louisiana-style politics.

A taxpayer-funded hunting club, replete with a cupola-topped lodge and cabins, was off-limits to all except Louisiana’s “leading politicians and their guests,” wrote Janice Buras in a 1991 history of the club. It took a minor scandal and more than a decade before the hoi polloi were allowed in.

Over the past century, Louisiana established another 49 wildlife management areas across about 1.3 million acres, or about 4% of the state’s total area. These days, Pass-a-Loutre draws about 20,000 visitors each year, but few amenities remain. The lodge and cabins were ripped apart by storms decades ago.

Wildlife and Fisheries still maintains a patrol station tucked into a sheltered channel off Dennis Pass.

Nyman steps onto the station’s pier and watches water squish up through boards that used to be high and dry. “The water’s rising, and this whole place is sinking,” he said.

Nyman worked here as a wildlife enforcement officer before committing to academia. He used to sneak up on duck poachers in a pirogue and “chauffeur scientists around.” He decided the scientists had the better gig and went back to school, earning a Ph.D. in coastal studies from LSU in 1993.

He points to a new boat shed that’s well-adapted to Pass-a-Loutre's changes. It sits on pilings about 15 feet above the water. When hurricanes begin to brew, the station’s boat is pushed up a ramp and locked inside steel walls.

The old bunkhouse might not fare as well in a storm. Nyman opens its busted and rotten screen door to wander rooms that he and other research scientists occasionally use. The living room is a showcase for what is likely one of the biggest collections of taxidermied waterfowl in the state, and the kitchen is plastered with old maps showing channels and other landmarks that are now open water.

He points to the spot where the lost town of Balize once stood. Originally a fort built by the French about 300 years ago, Balize was supposed to guard the entrance to the Mississippi, but frequent storms, flooding and the ever-shifting course of the river repeatedly forced its French, then Spanish and then American owners to abandon, rebuild and relocate the outpost until it was finally left to a rowdy group of oyster pirates and river pilots. According to a 1921 newspaper account, these “wild men and wilder women'' made Balize the “wickedest spot in Louisiana,” a place where the “raw, red sinfulness of the far frontiers'' came into full bloom with “all-night orgies that ended with a string of murders at dawn.”

By the 1930s, all that remained of Balize was a sunken cemetery. Nyman knew an old-timer who caught a glimpse of the headstones before they disappeared under the waves.

Nearby, the Pass-a-Loutre Lighthouse awaits a similar fate. Built in 1852, the iron-clad, 70-foot-tall structure has survived dozens of storms, looting by Union troops and burning by Confederates. In the 1930s, the lighthouse was surrounded by an island of almost 1,000 acres. By the time Nyman paid his first visit in the mid-1980s, only a narrow strip remained. The sea soon swallowed the base, including the door, and Hurricane Katrina made off with its red-domed top. 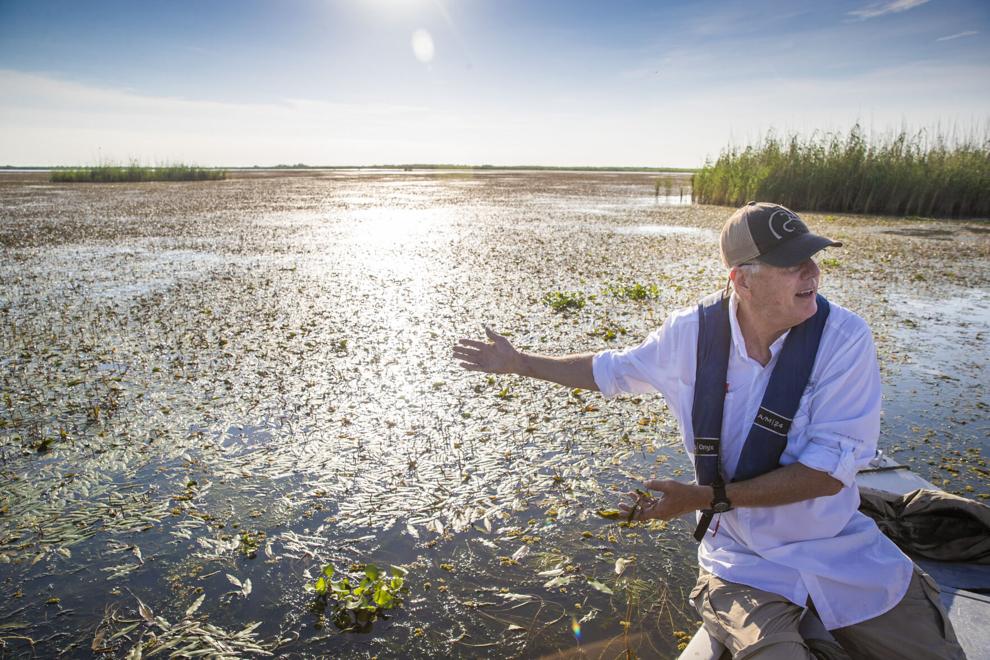 It isn’t easy to determine how much of Pass-a-Loutre’s constantly shifting landscape has disappeared, but the wider bird's foot delta has lost more than 113,000 acres over the past half century, according to the state coastal authority. In 50 years, only about half of it is expected to remain.

Despite its rapid rate of loss, Pass-a-Loutre is where Louisianans pioneered the idea of harnessing nature to rebuild land. In the 1950s, state wildlife managers noticed that ducks tended to congregate in the vegetation-rich shallows near breaks in river channels. They cut crevasses to attract ducks, and by accident found they were building new marsh. The diverted river water dropped sediment as it passed through the narrow cuts. As the sediment piled up, plants took root and land was born.

In 1986, the state cut the first crevasse engineered specifically to build land.

Wildlife and Fisheries spent almost $90,000 building three crevasses in Pass-a-Loutre in the late 1980s. More than 350 acres have been created by the projects, averaging out to about $252 per acre.

“Crevasses are the most cost-effective restoration tool we have in our toolbox,” Baker said. “It doesn’t take much. You just dig a ditch and allow it to build land naturally.”

Nyman slammed a soil sampler into the young land and pulled out a 2-foot-long cylinder of layered sand and mud.

“That’s all recent accumulation,” he said. "If you were born after 1985, you’re older than this dirt.”

Crowding the shallows was a mix of pond weed, widgeon grass and delta duck potato - all magnets for ducks and other wildlife.

The crevasses gave rise to the state’s most ambitious coastal restoration project: the Mid-Barataria Sediment Diversion, a $2 billion crevasse on a grand scale. If approved by federal regulators, the diversion will funnel sediment-laden Mississippi River water through a section of levee on Plaquemines Parish's West Bank and spill it into Barataria Bay, potentially rebuilding 18,000 acres of marsh.

“Pass-a-Loutre was where that whole idea was developed,” Nyman said.

Projects are also underway to revive Pass-a-Loutre's marshes with sediment dug out of the Mississippi. The coastal authority plans to spend $6 million from the Deepwater Horizon oil disaster settlement to dredge three passes and use the spoils to build marsh along three channels.

Similar dredging projects have had dramatic results. Nyman showed off an empty field of freshly dredged sand near the Wildlife and Fisheries station.

“If you look at this on Google Earth right now, it’d show up as open water,” he said. “That’s what it was two years ago, just water three feet deep.”

But the rate of gain vs. loss isn’t in Pass-a-Loutre’s favor. While storms and subsidence are constant challenges, a new one - a rapidly spreading Asian insect - is taking a crippling toll on roseau cane, a tall and sturdy marsh grass that holds together much of the bird's foot delta.

Appearing in Louisiana about five years ago, the tiny insect, known as a scale, has damaged thousands of acres on the delta and elsewhere on the coast. Baker has documented roseau die-off causing some channels to recede by almost 1,000 feet over just 16 months.

Spraying insecticide in such a fragile ecosystem is out of the question, as is burning the cane on a delta loaded with oil pipelines and wells. The best option might be to foster the growth of a scale-resistant roseau. The downside is that it, too, is an aggressive invader that would likely require millions of dollars to control, as is the case in Chesapeake Bay and other parts of the East Coast.

Despite the challenges, Baker is optimistic about the Pass-a-Loutre’s future.

“That old delta’s been hanging on for a long time,” he said. “We’ll do our best to keep what’s there.”

Nyman’s outlook is much dimmer, but that doesn’t mean he thinks restoration efforts should cease.

“Just because I’m probably not going to live 100 years doesn’t mean I start eating cheesecake every meal,” he said. “I want to keep going. I want this place to keep going as long as it can. It’s still a benefit to alligators and egrets, and recreation and our economy.”

Pass-a-Loutre will stick around for many more years “but not a hundred,” he predicted. “I could be wrong. I hope I’m wrong.”

For links to more information and photos:  permalink