Arthur Villordon is a professor with the LSU AgCenter and a researcher at the Sweet Potato Research Station on Sweet Potato Road in Chase, Louisiana. Thanks to a three-year $220,970 grant from Lamb Weston, a food processing company specializing in frozen french fries, Villordon and his team is studying how farmers can grow sweeter, tougher, and more evenly shaped sweet potatoes through traditional and sustainable practices: 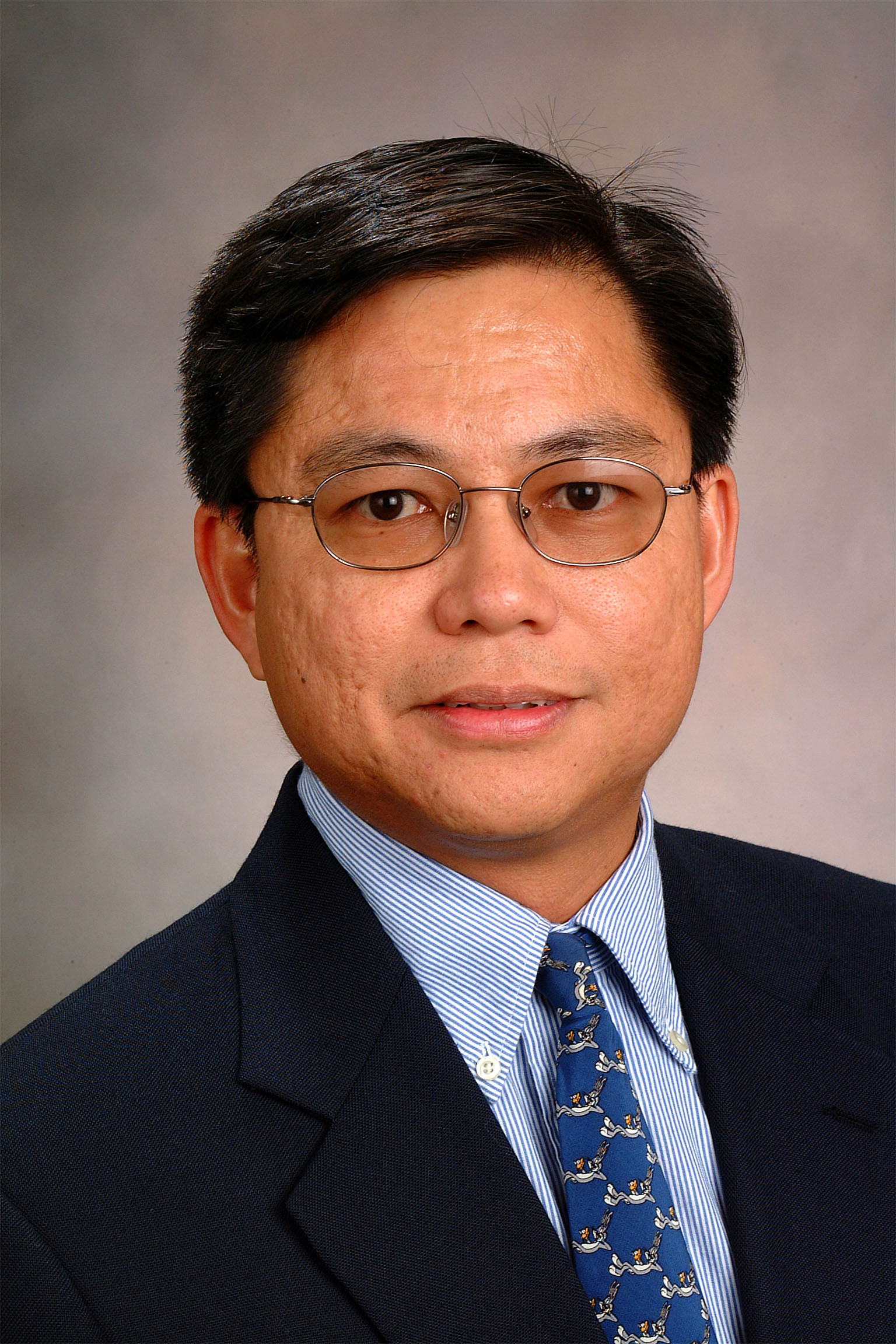 This is actually our second round of funding from Lamb Weston, based on our findings from the first round. The problem we’re trying to solve is how to make sweet potatoes more tough, so they don’t bruise as much when farmers harvest them, and the skin stays intact. Farmers can lose up to 20 percent of their sweet potatoes during storage due to weight loss. How can we make them last longer? In Louisiana, we can only grow sweet potatoes one season of the year, planting around May-June and harvesting by October, before the first frost. We then have to store them during the rest of the year.

For sweet potato french fries, the shape matters a lot. You can get a lot more fries from one that looks like a brick than from one that’s pointy-ended and tapered and irregular.

For sweet potato french fries, the shape matters a lot. You can get a lot more fries from one that looks like a brick than from one that’s pointy-ended and tapered and irregular. We’re finding out what farmers can do now to get sweet potatoes that are as blocky as possible to minimize bruising and loss in harvest and storage, and then in processing; we’re developing methods and approaches to advise the growers.

We’re encouraging farmers to test their soil to find out how much phosphorus fertilizer they’ll need at planting. Some farmers do this routinely while others don’t because it’s quite expensive. But usually, the cost can be recovered through increased yield.

There was an LSU researcher back in the 1930s who noticed that sweet potatoes that are grown earlier in the season tend to be shorter and rounder, while those grown later tend to be long. Our hypothesis is that, early on, it is cooler at night and this slows down the uptake of phosphorus. Later in the summer, you have a higher uptake of phosphorus as temperatures go up, and sweet potatoes respond by becoming longer and less round.

Before you can say you’ve changed the shape, a means of measurement has to exist. But how do you measure something irregular-shaped that grows underground and is very different from other fruits and vegetables?

How to measure the shape of the sweet potato was one of our first challenges. Before you can say you’ve changed the shape, a means of measurement has to exist. But how do you measure something irregular-shaped that grows underground and is very different from other fruits and vegetables? You can’t just measure the length and the diameter. We actually had to develop a new method for measuring the shape, which we’re fine-tuning now. What we’re doing is capturing a 3D image. You can do this with high-end laser sensors that cost up to $20,000, but we found a $400 solution by attaching a cheaper 3D sensor to an iPad, and actually, it’s better than the $4,000 laser scanner we acquired for comparison. The expensive one didn’t capture the information the cheaper one does. Also, we found that we could suspend the potatoes from the ceiling to do our scans—it’s crude and looks funny but works really well; we’re suspending the potatoes using an electrical wire. At first, we tried garden twist ties, just whatever we could find around here, but the electrical wire is firm enough so the potato won’t swing around. 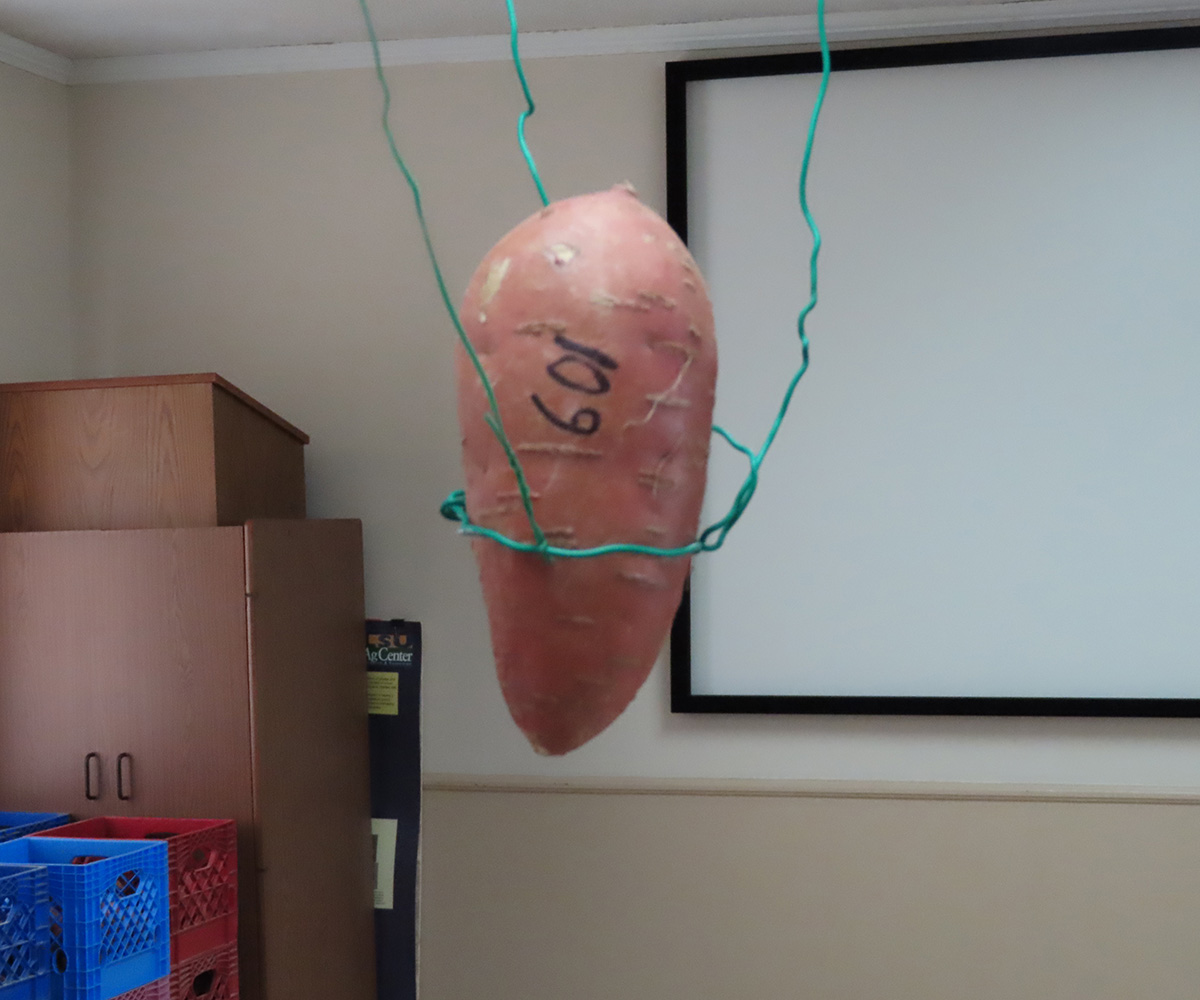 The current acceptable method of measuring surface area in sweet potato is to shrink-wrap the sweet potato, spray the whole thing with black paint, peel off the shrink wrap and mount it on paper, scan it with a regular scanner, and perform a digital image analysis to estimate the area. I had a student worker do this all summer long. Our objective was to compare the conventional shrink-wrap method with our 3D scanner. For volume, the current published method is via water displacement where the sweet potato is immersed in water, and the amount of displaced water is equal to the volume. Both conventional methods take up to an hour per sample. Using our 3D scanner, however, we can measure volume at the same time we’re measuring surface area in less than 10 minutes. It was quite funny, because it’s not much to look at, but since Lamb Weston came to see our work at the station, they’ve actually adopted our process for 3D shape measurement.