Studying the Enigmatic Dance of Electrons in Graphene

Daniel Sheehy, associate professor in the LSU Department of Physics & Astronomy, will be the sole US scientist on an upcoming international collaboration—including Nobel Prize winner Andre Geim—to understand the electronic properties of graphene: 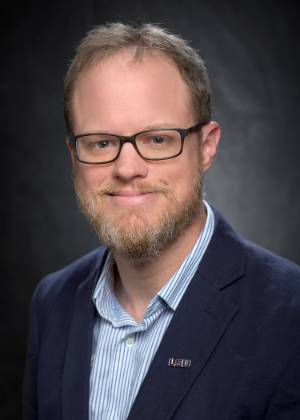 “As you know, devices are getting smaller and smaller, like the stuff in your phone or your computer—incredibly small electronic devices, but not exactly on the atomic scale. Graphene is the first material ever created that’s exactly one atom thick. It’s not a few atoms thick—it’s exactly one atom thick, a perfectly thin sheet of carbon. It’s strong because the carbon-carbon bond is really strong and there’s a wide range of possible applications for graphene. It has interesting electronic properties and amazing mechanical properties. You can roll it up in a tube and make a strong rope out of it, or it could be used for biological applications, as a very thin strainer for molecules and atoms, to filter stuff out.

“Our project is about the electronic properties of graphene, how it conducts electricity, and what it can be used for. Graphene is very conductive, but its conductivity is not well understood. It’s different from other materials like metals, which conduct electricity very well, and insulators, which don’t. Graphene is sort of in between, with properties of both. We’re trying to understand how well graphene conducts electricity and energy, how it conducts heat, and other things like thermoelectric properties, the idea that certain materials can turn temperature differences into electricity. It’s possible to use graphene for that. If you have a machine that produces a lot of waste heat, which otherwise would be radiated into the environment and contribute to global warming, what if we can recover some of that and turn it into electricity and put it back into the grid? That could be quite useful.

“The reason we mention hydrotronics in this project is because we’re trying to figure out if the key to understanding graphene is to think about the electron flow in graphene as being more like water. It’s a lens to evaluate the behavior; a new paradigm.”

“We’re a team of experimentalists and theorists, and there’s a lot of us on this project. The reason LSU got involved is because of a long-term collaboration with one of the project leaders, Professor Joerg Schmalian at the Karlsruhe Institute of Technology in Germany. Professor Schmalian used to be at Iowa State University, and I was a post-doc with him there, working on graphene, before I came to LSU. He and the other project leaders put together an international team for this project, with universities in Germany, the UK, Israel, Italy, the Netherlands, and Chile. The idea is to do both theory and experimental research to understand the properties of graphene-based devices.

“Graphene was discovered in 2004, although the idea of it was well known in theory. Then came an effort to make it purer and purer. Now, people are getting better at making devices with graphene. They’re taking two layers of graphene and putting them together, and if they rotate one a little bit in relationship to the other, they can create what’s called a moiré pattern that can radically change the electronic properties.

“One of the leaders on this project is Andre Geim who’s in Manchester, England, and he shared the Nobel Prize in 2010 for the discovery of graphene. He and his student Kostya Novoselov were the first to create this material. If you think about it, pencil lead is graphite, and graphite is layers of graphene. If you were to write very carefully, simple flakes of graphene would come off, but it’s likely multiple layers of graphene, not just one layer. To isolate one layer, Geim and his student actually took graphite and used the scotch-tape method—you might have heard about this—they carefully peeled off layer after layer to get a layer of graphene that’s exactly one atom thick. It’s too simplistic to say that this is what got them the Nobel Prize, but this was definitely part of it, that it’s even possible. People knew it was, but some thought it wouldn’t be stable and therefore fall apart immediately, and that’s wrong. It’s actually a very stable material, and now there’s people all over the world working on it. Graphene is a revolution in the sense that we don’t have to work to make it smaller and smaller. It’s naturally really small.

“One idea we’re interested in using graphene for is a solar cell. Graphene is both conductive and almost perfectly transparent. For a solar cell, that’s ideal, as several layers of graphene could capture as much light as possible. In this project, we’re interested in big picture ideas about the nature of transport in electronic materials more generally. There are a lot of materials in the world that are not well understood in terms of how they conduct electricity. Electrons in a material interact with each other as well as with the material lattice, the atoms of the material, so it’s a tricky problem to figure out.

“One of the big mysteries in materials is how to determine what their resistance is, how easy it is for electrons to flow. There’s this idea out there that there could be a so-called hydrodynamic regime, where the flow of electrons acts like the flow of water. In a regular material, electron flow isn’t usually like water flow. Water flow is turbulent, viscous, and there can be vortices. The reason we mention hydrotronics in this project is because we’re trying to figure out if the key to understanding graphene is to think about the electron flow in graphene as being more like water. It’s a lens to evaluate the behavior; a new paradigm. If you’re trying to think about graphene as a metal, it doesn’t work. You’ll get stuck. But the electrons in graphene seem to interact very strongly with each other, like water. You can’t compress it very easily, and the flow can be irregular. Those behaviors could have an analog in graphene. Hydrodynamics is the study of any kind of fluid flow, not just water. We’ll look at the shear viscosity and bulk viscosity. What I do is try to theoretically calculate the resistance of graphene and other transport properties that will tell us about the nature of electron flow in graphene.

“Electrons are very enigmatic. In superconductors, electrons pass electricity almost perfectly because of their quantum mechanical choreography; they pass currents perfectly because they form perfect pairs. There are quantum mechanical effects. Beyond the possible applications for graphene, we’re also interested in it because it’s the simplest electronic system there is. It’s just one sheet of carbon, one atom thick. If we understand graphene really well, we might be able to take ideas from it and apply it to other materials.”