LSUHS Helped a Mom Walk Again; Now She Will See Her Son Walk at LSU's Commencement

BATON ROUGE - When William Gaspard Jr. graduates with his degree from LSU in agricultural and extension education on May 20, his mom and family will be there to cheer him on. But there was a time when William wasn’t sure his mom would ever walk again. A 2013 surgery performed by doctors at LSU Health Shreveport was an answer to their prayers. 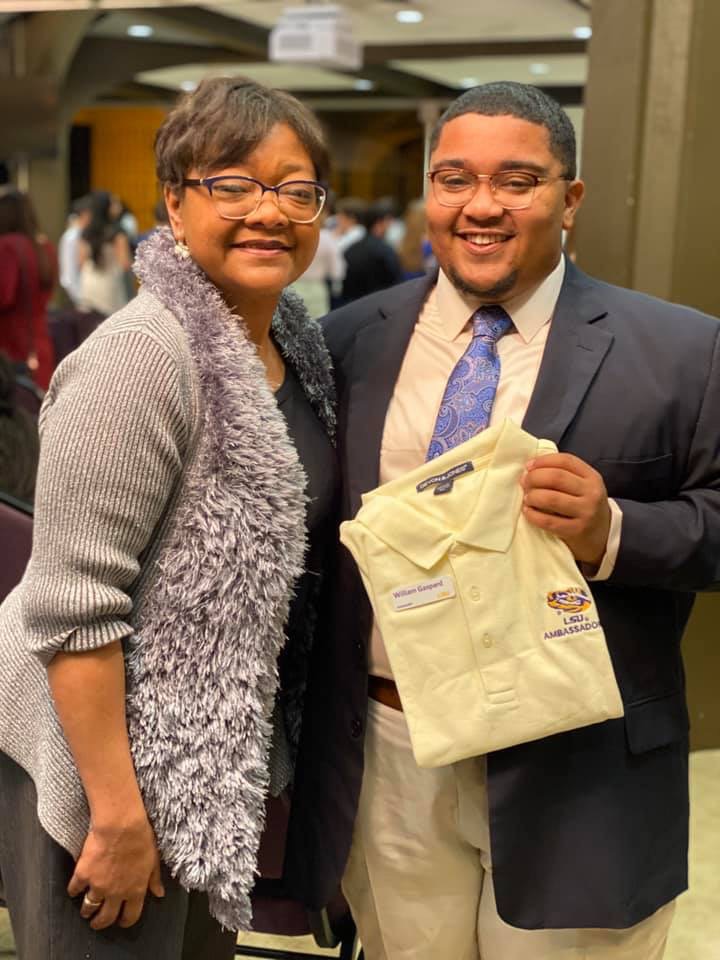 Mother and son, Monique Harris-Gaspard and William Gaspard Jr., together at the LSU Ambassador ceremony.

“That operation wasn't just a fight for her life, but it was a fight for my sister and my life and future as well. Without the technology and the innovation, really the tenacity of her medical team, it would have been difficult for her to reach this level of recovery, especially since she was told that it was extremely likely that she was not going to walk again,” Gaspard Jr. said.

It started in 2011 when Gaspard Jr. was in fifth grade in Moreauville, La. He said his mom became so sick she wasn’t able to fully care for him and his younger sister.

“My sister and I went home one day, and we were just told that we were spending the night at my aunt’s. My mother would stay late after school sometimes for helping at school events and activities. So, it was nothing unusual for us to go to a family member's house,” Gaspard Jr. said. “That one night turned into one week, and then one week turned into one month, and it was kind of just a puzzling experience.”

What he didn’t know was his mom, Monique Harris-Gaspard, wasn’t working late at her job as an assistant principal—she was fighting for her life.

“It started as a small boil, which I had lanced,” Harris-Gaspard said. “The boil healed from the outside of the body first, instead of healing inside the body, which caused the infection to tunnel to my spine.”

She was admitted to an Alexandria hospital in August 2011, where she was diagnosed with pneumonia and a staph infection, and she needed surgery.

“The doctor informed my family that I had a 50-50 chance of survival with this surgery,” Harris-Gaspard said.

She survived and focused on her recovery and rehabilitation, relying on a wheelchair.

“I didn't even know that I couldn't walk until physical therapy visited my room, and I could not move my legs. But I knew the day would come that I would walk again, but of course, not the way I walked before this incident,” Harris-Gaspard said.

“Since she was bedridden, she had lost all muscle movement from the waist down, and they weren’t sure of the long-term effects of the infection,” Gaspard Jr. said.

Gaspard Jr. and his sister were soon able to return to their home with their mom and helped in her recovery.

“Every day I felt I had taken a part of his childhood where he should have enjoyed and played, but he was there taking care of me,” Harris-Gaspard said. “I did all of the cooking, the cleaning, getting my sister ready for school, homework, helping my mom around the house. We had to make it work and be a dream team. But my mom is a very strong, independent woman.”

One year after her diagnosis, Harris-Gaspard returned back to work at the Louisiana School of Agriculture in a wheelchair. A teacher visited her office and shared his story of a mobility-saving surgery.

“He told me his story of having to have his ankle rebuilt, and he was able to walk again and ride his favorite motorcycle,” Harris-Gaspard said.

That story motivated her to visit with surgeons at LSU Health Shreveport in 2013 for a third back surgery she hoped would finally heal her and give her the ability to walk again.

“She presented with an inability to stand up erect and complained of severe pain in her back and legs,” said Dr. Anthony Sin, neurosurgeon at LSU Health Shreveport.

Dr. Sin said the infection caused extensive destruction in multiple vertebrates and resulted in extreme misalignment with severe narrowing of her spinal canal

“A surgery was done to decompress her spinal cord and realign her spine into a better global balance, and she had a very good outcome,” said Dr. Sin.

“I thank God he blessed the surgeons with the knowledge, experience, and courage necessary to perform what I call a miracle in disguise,” Harris-Gaspard said.

Dr. Bharat Guthikonda, chair of Neurosurgery at LSU Health Shreveport, said Dr. Sin is a groundbreaking surgeon in this field.

“Dr. Sin is internationally recognized for his work in spinal deformity and has been instrumental in providing feedback leading to innovative technologies in complex spine surgeries and robotics,” said Dr. Guthikonda,. “More recently, under Dr. Sin’s leadership, the first robotic spine surgery in north Louisiana was performed demonstrating the strength of this neurosurgery department. With LSU Health Shreveport being an academic medical center, surgical innovations are not only important for our patients but in the training of the neurosurgeons of the future.”

“Now that she has gained almost all of her mobility back, it's simply a miracle,” Gaspard Jr. “You wouldn't even know that she went through that experience. And we grew closer through the process.”

The experience didn’t stop Gaspard Jr. from losing focus on his own education and goals. While still a senior in high school, he enrolled in college classes at LSU of Alexandria.

“I took two full term semesters of classes during my senior year of high school. So, by the time I came to LSU, I was already a sophomore. I am LSU made,” Gaspard Jr. said.

Gaspard Jr. will next enroll in law school at Southern University and aspires to serve as a liaison between agricultural producers, consumers and the government. He said this journey prepared him for his future.

“I learned that through the experiences, through the struggles and through the adversities, I was equipped and trained to be the young man that I am today,” Gaspard Jr. said. “I had that experience of an adult and it really instilled in me a level of determination that was mirrored from my mom's level of determination. I noticed how strong and resilient she was throughout the process and that motivated me to reciprocate that in my life. I know the sacrifices and the pain she went through for my sister and myself. I felt an obligation to reflect that same strength, determination and drive in my own life.”