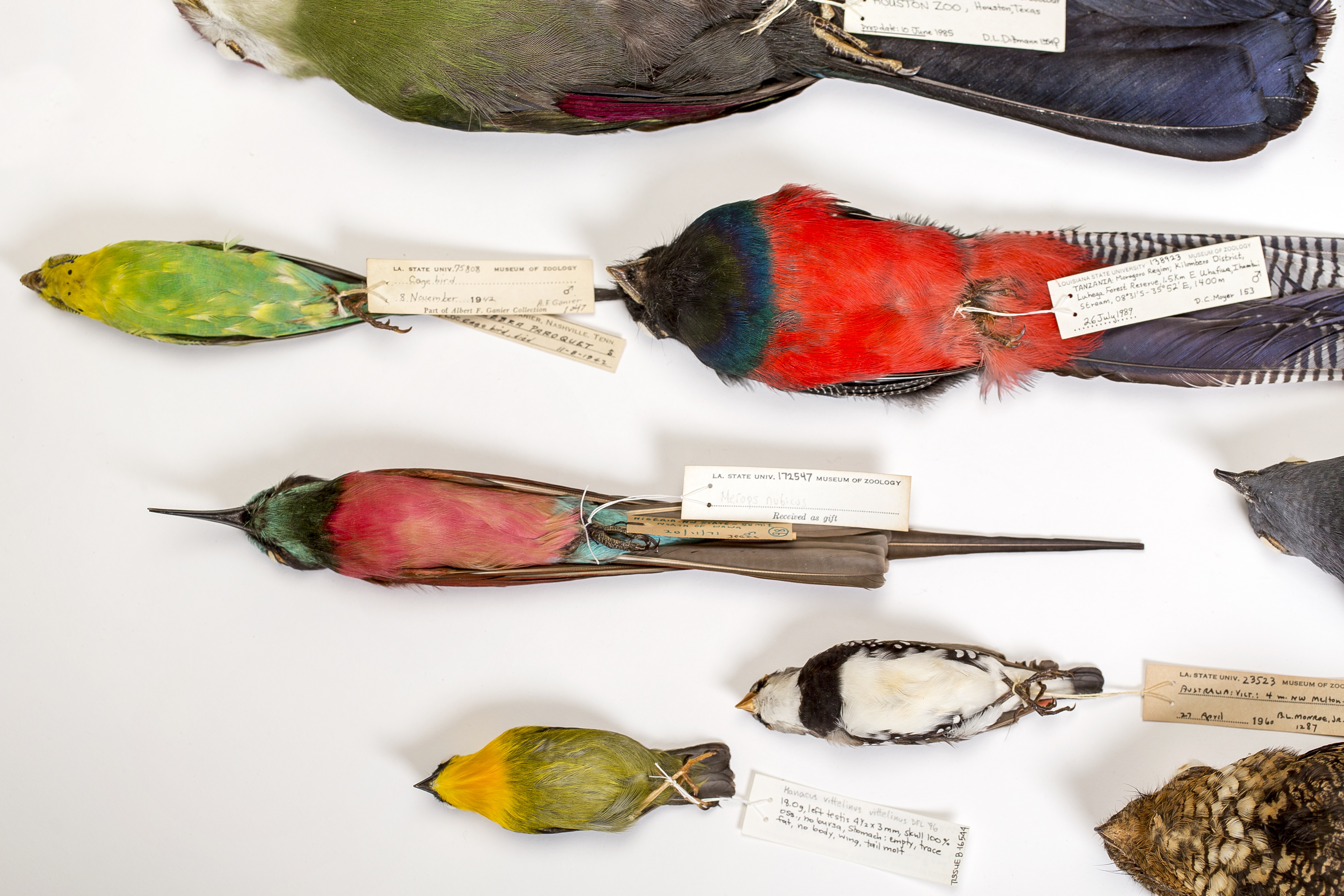 LSU researchers are part of the international Bird 10,000 Genome Project that aims to sequence the genomes of all living bird species.

BATON ROUGE – Researchers at LSU are contributing significantly to the Bird 10,000 Genome Project, or B10K, an initiative to sequence the genomes of all living bird species, as it announces the completion of its second milestone—the release and analysis of genomes representing 92 percent of all bird families. In a study published today in Nature, the B10K achieved its family phase milestone by releasing genomic resources for 363 bird species including 267 new bird genomes and illustrating how comparative analyses of these genomic resources help us understand the evolution of birds.

The research published today established a new pipeline to analyze these genomic data and revealed a detailed landscape of genomic sequence gains and losses across bird species. For example, these analyses showed that the songbirds, a group of Passeriformes, have lost a gene called cornulin, which might have contributed to the evolution of their diverse, pure-tone vocalizations.

“Such detection power was only possible when the species were densely represented in the comparative genomic analyses,” said Guojie Zhang, a principal investigator on the B10K and head of the Villum Centre for Biodiversity Genomics at the University of Copenhagen.

The large collaborative effort involved more than 150 researchers from 125 institutions in 24 countries while also relying heavily on frozen tissue samples collected from birds and stored in museums around the globe. The LSU Museum of Natural Science, the Smithsonian National Museum of Natural History and the Natural History Museum of Denmark contributed the majority of samples for the project. 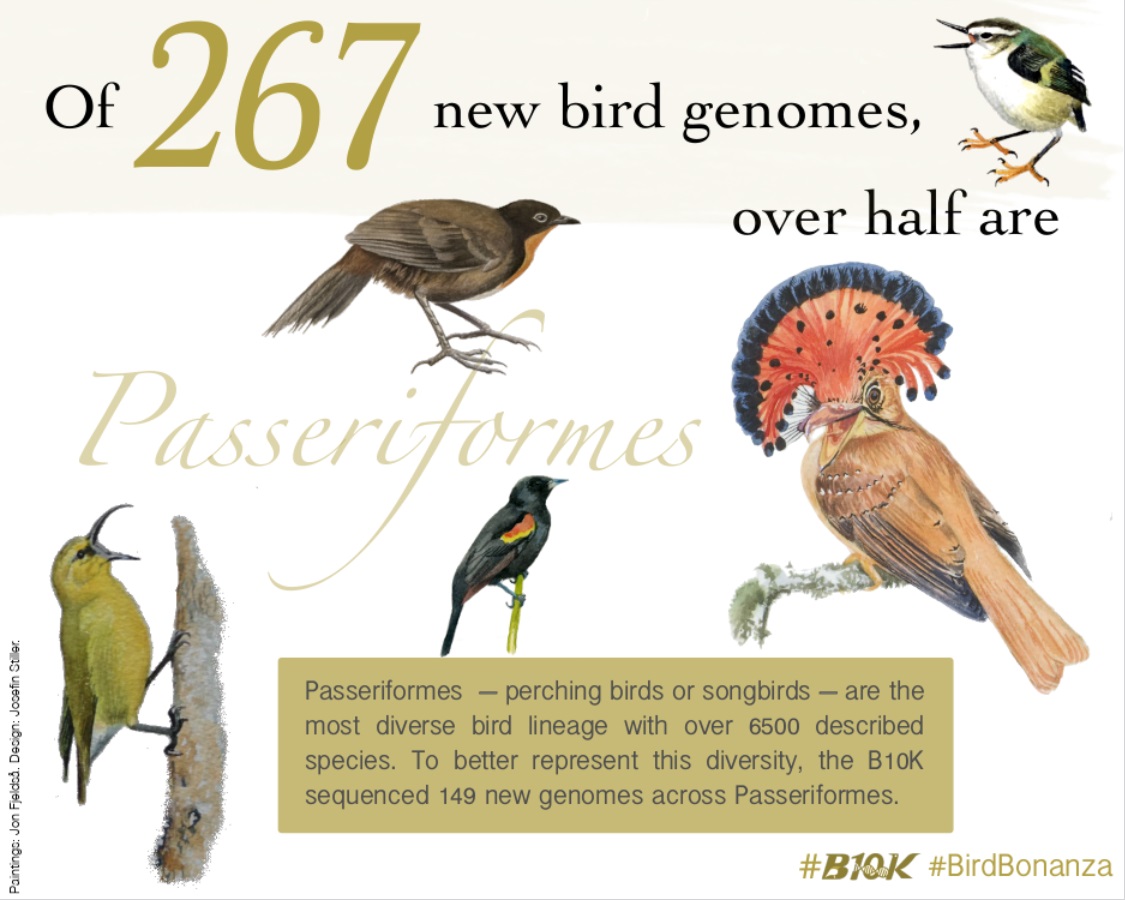 The LSU Museum of Natural Science's tissue collection is the oldest and largest of its kind in the world. This repository at LSU is crucial for supporting ambitious studies, such as the B10K project.

The LSU Museum of Natural Science’s tissue collection is the oldest and largest of its kind in the world, with tissues collected from more than 140,000 individuals of about 8,000 species of vertebrates. LSU researchers began collecting these tissue samples in the 1960s, and the LSU Museum of Natural Science contributed tissues from 40 bird species to the study published today.

This vast repository at LSU was started long before the rise of genomic sequencing approaches and big data analyses, but it is now crucial for supporting ambitious studies, such as the B10K project.

“We are incredibly lucky for the foresight of Drs. Herbert Dessauer and Mark Hafner, who formally created this amazing resource at LSU during the late 1970s and for all of the subsequent LSU students and researchers who spent time and energy carefully collecting and depositing specimens and tissues. These types of museum resources enable this and other studies that were previously thought impossible, and LSU is very much one of the leaders in the area of collections-based genomic analyses,” said study co-author, LSU Museum of Natural Science Faculty Associate and LSU Department of Biological Sciences Associate Professor Brant Faircloth.

In addition to the 40 bird tissues from the LSU Museum of Natural Science used in the study, LSU researchers contributed genome assemblies for two birds also being studied at LSU:  the White-breasted antbird, or Rhegmatorhina hoffmannsi, which is native to the Amazon rainforest in Brazil, and the Black-headed bulbul, or Brachypodius atriceps, which is found in the forests of Southeast Asia. 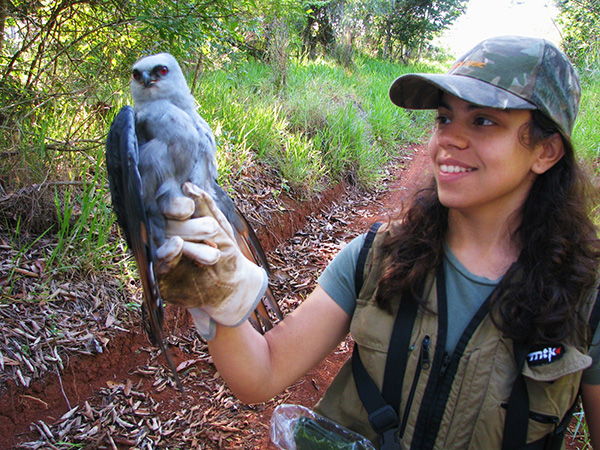 LSU Ph.D. candidate Glaucia Del-Rio's work on the genome assembly for the White-breasted antbird, which is native to the Amazon rainforest in Brazil, is part of this large collaborative project published in Nature.

“I am especially happy to contribute to this project with the genome of a bird coming from one of the most isolated and poorly studied areas in the world,” said Glaucia Del-Rio, LSU Ph.D. candidate. “This was only possible with the support of the LSU Museum of Natural Science, which helps graduate students conduct field work on the frontiers of biological knowledge. It is amazing to see many years of working in the Amazon forest being translated into a new understanding of animal diversity.”

LSU alumnus and current Post-doctoral Researcher Subir Shakya, who sequenced the genome of the Black-headed bulbul during his Ph.D. research, also noted the influence of the LSU Museum of Natural Science on his work: “The opportunity to contribute to this large, international study, along with the fieldwork I conducted at LSU, has helped me turn my passion for documenting and discovering new species in remote parts of the world into a lifelong career.”

In addition to their utility for studying aspects of bird genome evolution, the genome assemblies published today represent an important resource for avian conservation biology and conservation planning, particularly for poorly studied species. These genomic resources will also help understand how, when and potentially why so many bird species evolved.

“There are still open questions about the evolutionary relationships of birds; the new genomes play a key role in understanding bird diversification,” said Josefin Stiller from the Villum Centre for Biodiversity Genomics at the University of Copenhagen, who is leading the efforts to build a new evolutionary tree for all bird families.

The B10K Project international project is co-led by the University of Copenhagen, China National Genebank at BGI-Shenzhen, the Smithsonian National Museum of Natural History, Rockefeller University and the Chinese Academy of Sciences. The next phase of the B10K has started. It will make another practical leap by sequencing and analyzing genomes of species representing all 2,250 genera of birds. The LSU Museum of Natural Science is looking forward to continued collaboration with this effort.