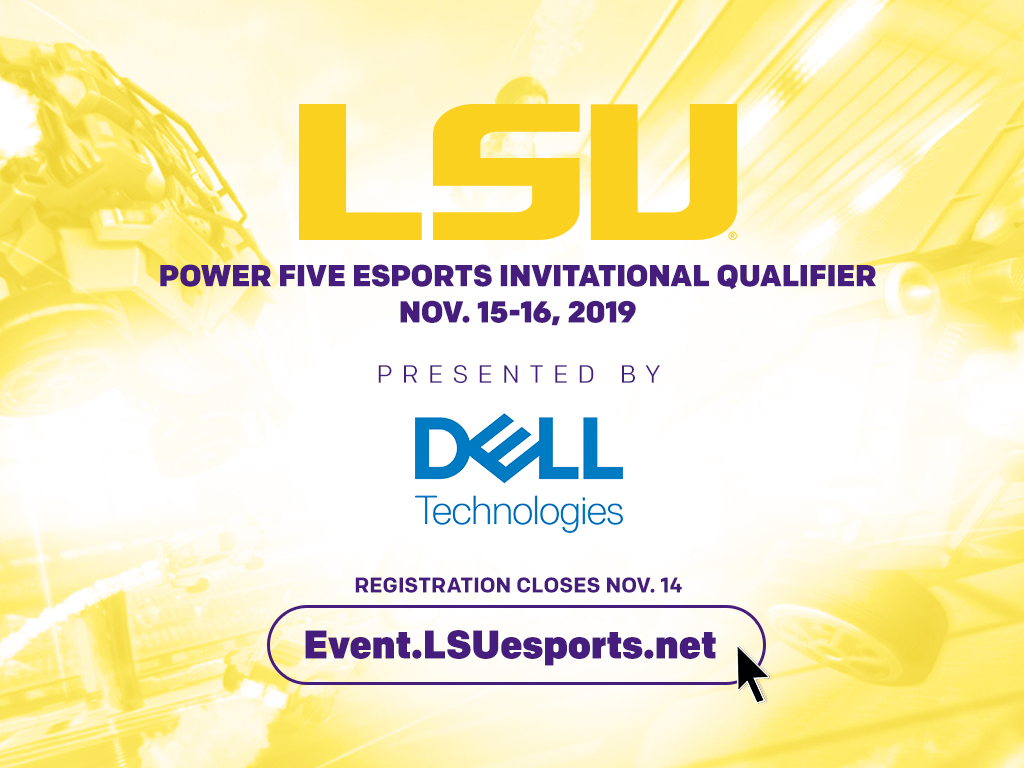 11/08/2019
BATON ROUGE – LSU and LSU Athletics today announced the launch of the LSU esports Rocket League qualifying tournament to select a three-student team that will represent the school at the inaugural “Power Five Esports Invitational” in New York in January 2020.

The Power Five Esports Invitational will feature Rocket League teams made up of students from member schools of the top five collegiate athletic conferences.

In order to select the team that will represent the University, LSU will host the Power Five Esports Qualifier presented by Dell on Nov. 15-16, 2019. The qualifier is open to full-time LSU students on the Baton Rouge campus who are in good standing with the university. Teams of three will compete in online Rocket League competition.

LSU students interested in competing in the Rocket League qualifying tournament can sign up by Nov. 14 at https://event.lsuesports.net.

The winning team from the qualifying tournament will represent LSU in the Power Five Esports Invitational with seeding play starting in early December and final competition in New York on Jan. 18-19, 2020.

“Esports are gaining popularity around the globe, and we are pleased to be able to host a qualifying tournament for our students to ultimately represent LSU in New York,” said LSU Executive Vice President & Provost Stacia Haynie. “We have successful esports clubs already on campus, an esports room recently opened at the UREC and now a qualifying tournament for our students to move on to compete nationally against other Power Five schools. We wish all the students competing good luck, and the LSU community will be cheering them throughout the competition.”

Announced by the Electronic Gaming Federation, or EGF, in October, the invitational features schools from the SEC, ACC, Pac-12, Big Ten, and Big 12. Expenses for travel to New York will be included for the winning team.

“While esports is not a recognized sport with the NCAA or with the participating schools, when power five athletics programs get together, the world will be watching and that’s great for LSU,” said Robert Munson, senior associate athletic director. “This kind of tournament is a first for our campus and required a joint effort with the university, the esports club and many other groups on campus. It’s an exciting opportunity and we are happy to be one part of it.”

The Power Five Esports Invitational will feature four weeks of preliminary matches beginning in December to determine tournament seeding for the finale held in New York City. The tournament will include live coverage streamed on Twitch.

About Rocket League
Rocket League is a vehicular soccer video game developed and published by Psyonix and is one of the most popular multi-player games in eSports. Rocket League has up to four players assigned to two teams. Players use rocket-powered vehicles to hit a ball into their opponent's goal and score points over the course of a match. More information on Rocket League can be found at https://www.rocketleague.com.