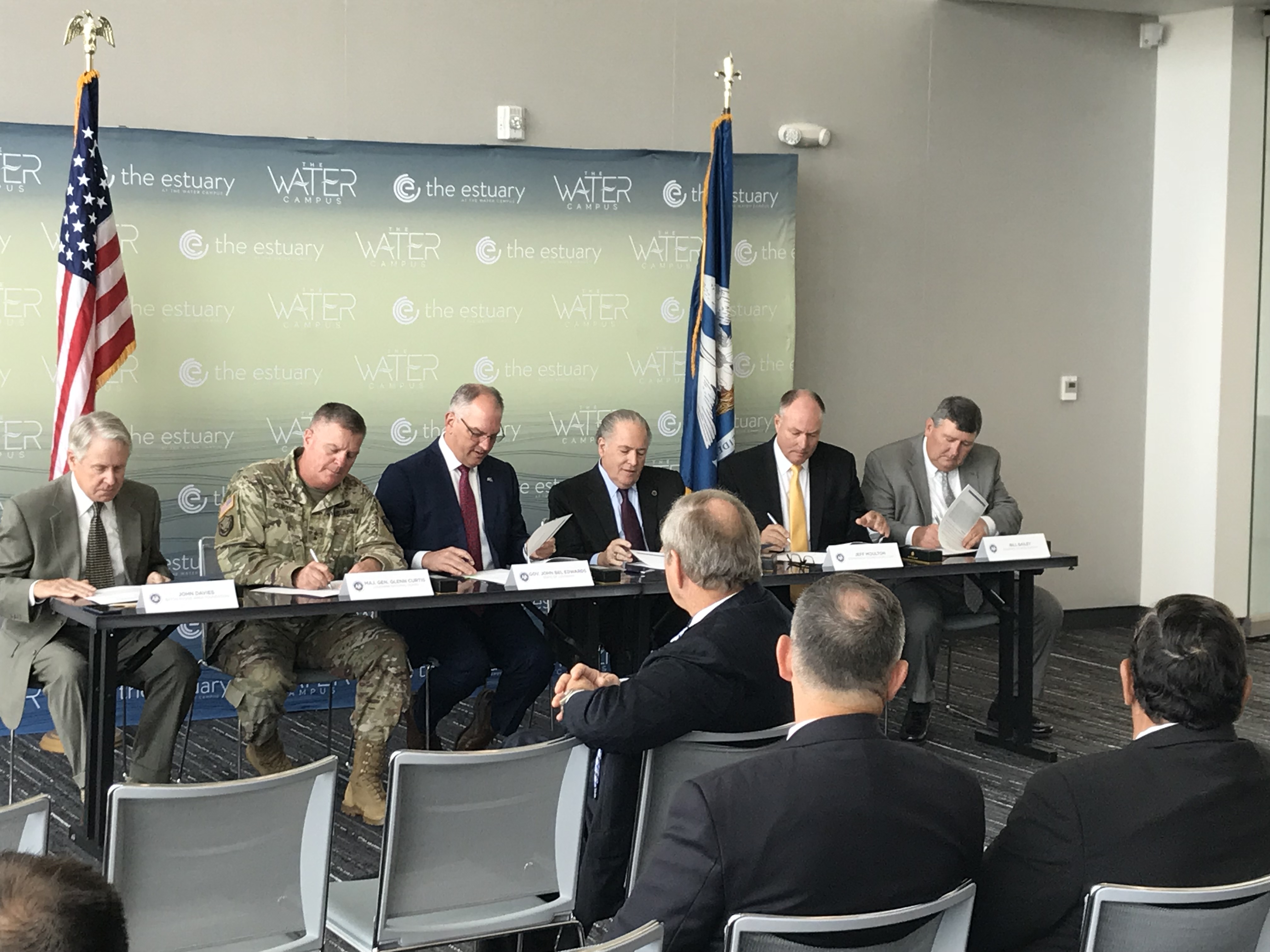 The center will promote a safer cyber community in Louisiana through information sharing, training and partnering among federal and state agencies, academia and industry experts. At the new 1200 Brickyard Lane building on the Water Campus, the project will establish the most secure cyber facility in Louisiana’s capital region, while generating dozens of new jobs and pooling the resources of the secured tenants to carry out the most sensitive cybersecurity tasks.

“When I created the Louisiana Cybersecurity Commission in 2017, we established a goal of making Louisiana a leader in this fast-growing field,” Gov. Edwards said. “Our top mission is ensuring the safety of sensitive information for Louisiana’s families, our military, our schools, our health-care facilities and our private-sector employers. We want everyone’s data and privacy to be safe and secure. So it’s incumbent upon us to invest in cybersecurity measures that protect our citizens from damaging attacks. Establishing this facility will provide one of the greatest tools for that safety, and it will continue our mission of becoming a global cybersecurity leader.”

Gov. Edwards and Gen. Curtis signed a Memorandum of Understanding that applies state resources to complete the cyber center. Joining them in the MOU signing were President and CEO Jeff Moulton of LSU’s Stephenson Technologies Corp., or STC, and CEO Bill Bailey of Radiance Technologies.

The Louisiana National Guard, or LANG, will lease the 11,000-square-foot space directly from Commercial Properties Realty Trust, an affiliate of the Baton Rouge Area Foundation that is leading development of the Water Campus. LANG leaders plan to call the facility the Louisiana Cyber Coordination Center, or LC3, and the Guard will sublease 3,000 square feet each to LSU’s STC and to Radiance Technologies. 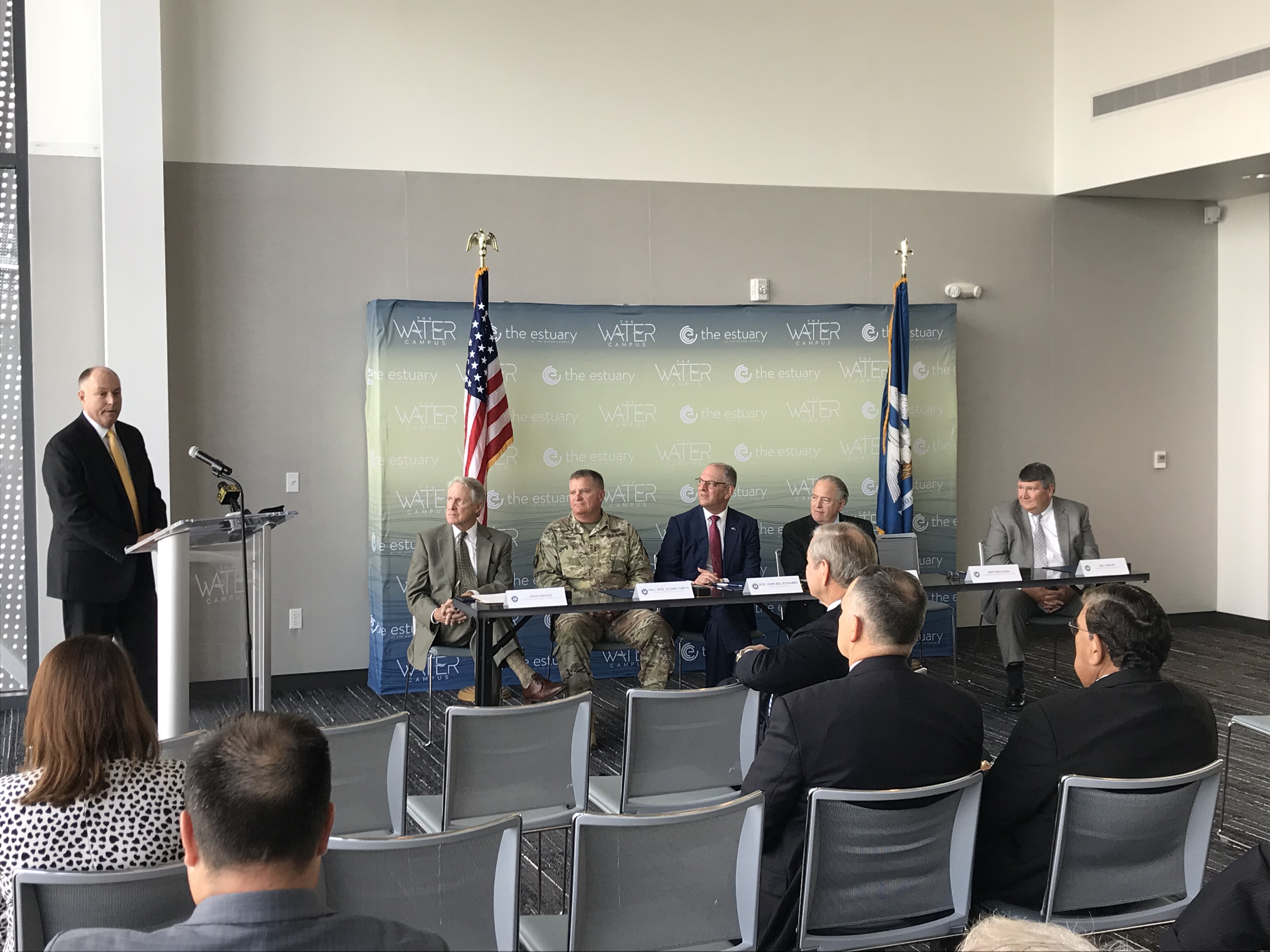 President and CEO of LSU’s Stephenson Technologies Corp. Jeff Moulton speaks about LSU and Louisiana’s reputation growing as a national leader in cybersecurity.

“This cyber center is exactly what the Louisiana National Guard and the State of Louisiana needed to facilitate the fulfillment of its cybersecurity mission,” Gen. Curtis said. “Over time, for those who are authorized to use this facility, this cyber center will act as the central civilian interface for coordinating cybersecurity information sharing, performing cybersecurity threat analysis, and promoting shared and real-time situational awareness between and among the public and private sectors.”

More than 40 LANG members periodically will use LC3 for training and real-world cybersecurity operations. Meanwhile, LSU’s STC affiliate will relocate 15 existing jobs while adding five new jobs at the cyber center, with Radiance Technologies retaining 22 existing jobs in Louisiana and adding 15 new cybersecurity jobs over the next two years: 10 at the Water Campus LC3 and five at its Louisiana Tech University location in Ruston. The new direct jobs created by LSU and Radiance will provide an average annual salary of $70,000, plus benefits.

“By continuing to strengthen our partnership between state, federal and university experts, LSU and Louisiana’s reputation is growing as a national leader in cybersecurity,” Moulton said. “We have the new infrastructure at the Water Campus and the top minds in the field that support our ability to nimbly respond to the most dire threats to national security.”

The Stephenson Technologies Corp. is a nonprofit affiliate of LSU and a federal contractor focused on providing solutions to the U.S. Department of Defense, federal Department of Homeland Security, the intelligence community and other federal markets. STC operates as a standalone corporation, wholly owned by LSU that conducts in-depth research on cybersecurity initiatives, including the Internet of Things, industrial control systems and emerging technologies.

“With the establishment of this center in Baton Rouge, Radiance Technologies will be adding more than 10 new positions at the Water Campus over the next two years, with an additional five new positions at our Ruston, Louisiana, location in the next 12 months,” Bailey said. “We are excited to continue partnering with the State of Louisiana and LSU to bring high-quality engineering, science and cybersecurity jobs to the region, supporting the Department of Defense and its national security mission.”

To secure the project, the State of Louisiana will provide $1.5 million through Louisiana Economic Development to build-out the existing 11,000 square feet to meet strict government standards. Also through LED, $500,000 in additional funds will support lease payments for up to five years. Other partners in the project, including the Water Campus and STC, will provide up to $250,000 for facility operations.

When fully realized, the LC3 facility will support cyber-related missions at major military installations in Louisiana, such as Fort Polk’s Joint Readiness Training Center and Barksdale Air Force Base’s Global Strike Command. Once fully operational, the Water Campus site will play a key role in responding to civilian cyber attacks upon schools and government institutions, as well as private workplaces.

The 1200 Brickyard Lane building, also home to Stantec’s new Baton Rouge engineering and design office, extends public-private investment on the Water Campus to $107 million. Anchors include the LSU Center for River Studies, the state’s Coastal Protection and Restoration Authority headquarters, the Water Institute of the Gulf and the Center for Coastal & Deltaic Solutions. Joining the CPRA headquarters and the 1200 Brickyard Lane office building, upcoming construction of a new 200 Water Street building of loft apartments will complete the perimeter of a Main Square that will become the green space hub of the Water Campus.

“Today’s cybersecurity announcement demonstrates what we have envisioned all along in our Water Campus master plan,” said CEO John Davies of the Baton Rouge Area Foundation. “This campus is a catalyst for cutting-edge science, smart lifestyle growth for our Capital Region, and a strong bond forging the future of downtown Baton Rouge and LSU.”