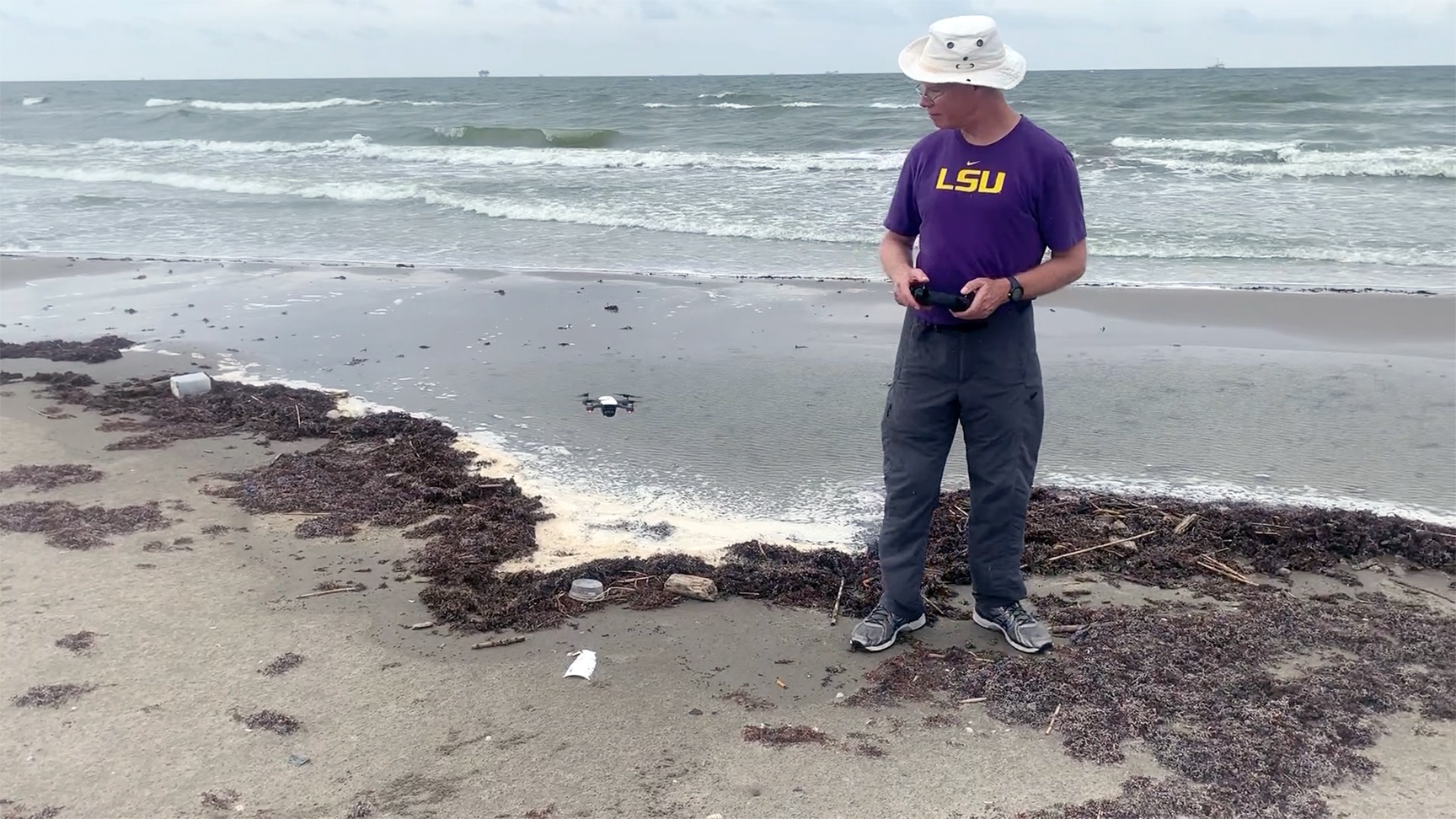 LSU College of the Coast & Environment Professor Mark Benfield flies a drone to survey, map and visually capture the amount of plastic pollution on remote Louisiana beaches as part of a proposed project for the National Geographic and Sky Ocean Ventures' Ocean Plastic Innovation Challenge. Benfield's team is one of the 24 worldwide finalists competing for research funding to solve the problem of plastic pollution.  Photo Credit: Mark Benfield, LSU

BATON ROUGE – LSU Department of Oceanography & Coastal Sciences Professor Mark Benfield is leading a research team that has been selected as one of the 24 finalists from around the world competing in the National Geographic and Sky Ocean Ventures’ Ocean Plastic Innovation Challenge. The LSU team was selected as one of the 24 finalists from 291 teams that submitted strategies to solve the problem of plastic pollution.

“This is a problem that can definitely be improved upon through individual actions. Recycle the plastic that you can. Substitute reusable items for single use plastics,” Benfield said.

His team is one of the finalists from 13 different countries competing for a share of a total of $1.5 million in awards and investments to solve this problem. Working with his colleague LSU Department of Oceanography & Coastal Sciences Assistant Professor Junhong Liang and his graduate student Kerrin Toner, Benfield is leading the LSU Remote Plastic Assessment Group, which uses drones to survey, map and visually capture the amount of plastic debris on Elmer’s Island and remote beaches off Terrebonne Bay in Louisiana.

High concentrations of plastic in the northern Gulf of Mexico originally sparked Benfield’s concern for plastics in 2015. Last fall, Benfield participated in a beach cleanup organized by the Barataria-Terrebonne National Estuary Program at Elmer’s Island, La.

“I was shocked by how much debris was on the beach,” he said. “I decided that a drone would be a great way to survey the distribution and types of plastic on Elmer’s Island.”

His group collected data and converted the images into maps that clearly demonstrated the magnitude of plastic, forming the blueprint for their entry into the competition.

“The population density along the Gulf Coast is relatively low, but the quantity of plastic trash on Elmer’s Island and other Louisiana beaches is very high. Where is it coming from? The answer appears to be the 100 million people who live in the Mississippi drainage basin,” he said.

While the Mississippi River is the largest river system in North America, the amount of plastic transported into the Gulf by this river is largely unknown. Benfield said that once plastic trash is disposed into the Gulf, it’s easily forgotten. He said one of the most shocking discoveries he’s found through this project is evidence that the Mississippi, a nationwide cultural treasure, has been allowed to become “a plastic sewer.”

When it comes to the impact in Louisiana, Benfield said plastic waste affects both the top and the bottom of the food chain. Fish found in Louisiana estuaries often have plastic in their stomachs, which can carry organic pollutants. Animals that eat these plastics also acquire these toxins, which only increase in concentration as they move up the food chain.

“We pride our state as being the Sportman’s Paradise. We need to take steps to keep this plastic waste out of our marine communities,” Benfield said.

Benfield is hopeful that this project will assist cleanup efforts in high-impact areas by identifying the times of year that are particularly prone to high deposition of plastic and that its images can shed some light on the source of the pollution.

The LSU team will pitch their project to the judges at the National Geographic headquarters in Washington, D.C., and the winners will be announced in December. They are competing for a share of the $500,000 prize purse, as well as a portion of $1 million in investments from Sky Ocean Ventures.

The Ocean Plastic Innovation Challenge is a key component of National Geographic’s “Planet or Plastic?” initiative, a global effort to significantly reduce the amount of single-use plastic that reaches the ocean by raising awareness, elevating science and education, advancing innovation and inspiring action.