LSU Graduate’s Finance Career Takes Him Around the World

“I live in Cyprus and travel across our three offices, as well as visiting clients in other parts of the world,” Kalochoritis said. “I founded the company Loggerhead Partners. It has offices in Dubai; Cyprus; and Zurich, Switzerland. It is a multi-family office with a specialization in promoting the United Arab Emirates, or UAE, zero tax jurisdiction. The UAE has zero corporate and zero personal taxes. The government has a number of fees that companies and individuals pay, but absolutely no tax.”

Kalochoritis is originally from Cyprus, a small island in the eastern part of the Mediterranean. He attended LSU from 1993 to 1997. 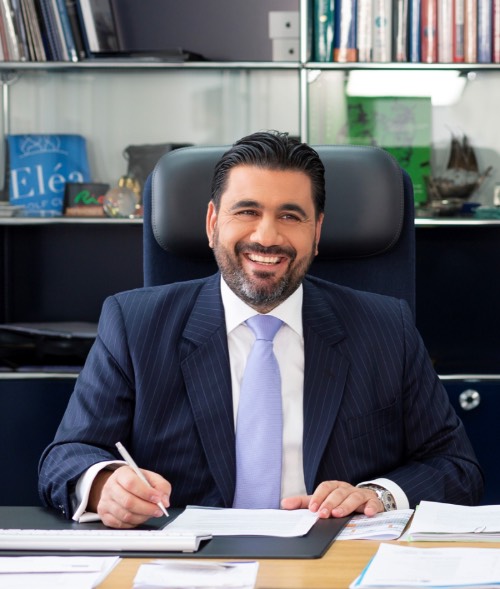 “I came to visit a friend at LSU and loved the campus. I applied while there on holiday and ended up with a scholarship, so there was no real decision to make,” Kalochoritis said.

“I was the first non-Louisianan to be elected president of the club. I served the club for most of my time at LSU in different positions and under the guidance and mentorship of the legendary Dr. David Crary, who was an extremely caring educator,” he said.

After earning his LSU degree, Kalochoritis went to work for Enron in Houston, Texas. Then he received his MBA from the Harvard Business School.

“I joined a start-up investment bank in New York called Capital Risk. Following the sad events of September 2001, where I had lived and worked in downtown New York City, I decided to move back to Europe,” Kalochoritis said. “I spent a year in Geneva, Switzerland, and then moved further east to become a CFO for a regional industrial group based out of Dubai. Then in 2006 I had an offer to join the oldest Swiss Bank in Zurich, Switzerland. After a two-year stint covering Eastern Europe, along with a partner, we launched a global macro hedge fund based out of my home country of Cyprus. In 2013, when we closed that fund I moved back to Dubai to set up my own company Loggerhead Partners. At the same time I was elected to the Board of Bank of Cyprus, the largest bank in my country where I served for four years.”

He said there is never a dull moment when you work in the world of finance.

“The money world is a living beast that you have to try to tame every single day. And you do that while interacting with some of the smartest people around,” he said.

Kalochoritis said his LSU degree set him up for success.

“The LSU education and experience helped me become a productive resource right off my first job following graduation. As an LSU graduate, I was much more mature as a professional than my peers and that is definitely the result of the engagement that we had with the business community while at school,” he said. “As an example, as a sophomore we were encouraged to subscribe to The Wall Street Journal. Also, during my last year at LSU I had to do a number of projects with local companies that exposed me to the business environment. And that experience and the skills developed were especially useful to me as a foreigner who was new to the United States to attend college. I am grateful to LSU and my professors there.”