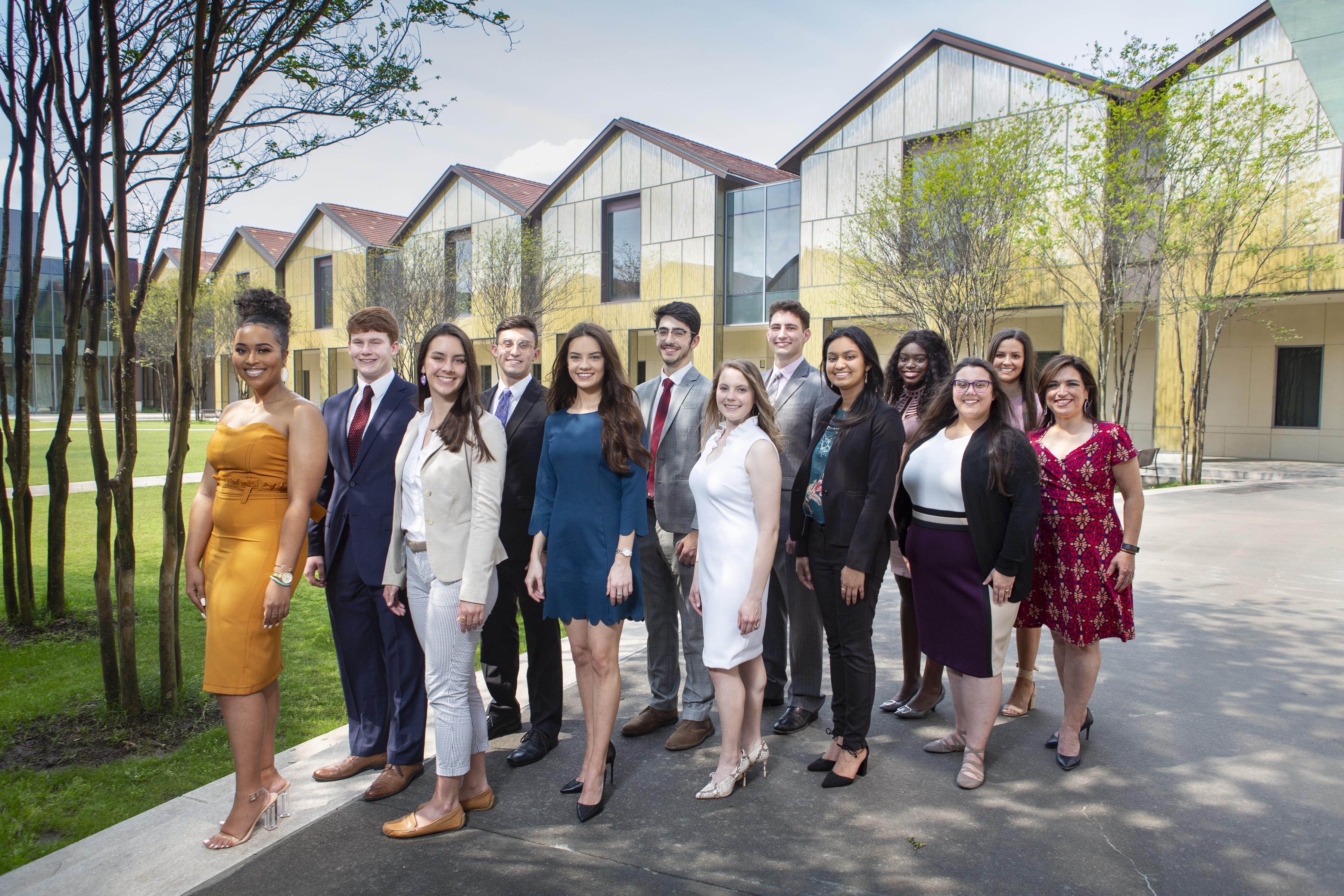 04/15/2019
BATON ROUGE – The LSU Office of the Dean of Students has announced the Tiger Twelve Class of 2019. The Class of 2019 was honored on Saturday, April 6, during a reception in the rotunda of the Business Education Complex.

Tiger Twelve is an award that is presented to 12 exceptional seniors since 2003. The Tiger Twelve exemplify the seven tenets of LSU’s Commitment to Community, which explains LSU’s basic principles as an academic community. Tiger Twelve recipients must be current, full-time students who have maintained at least a 2.5 GPA during their time in college.

The Tiger Twelve Class of 2019 includes: 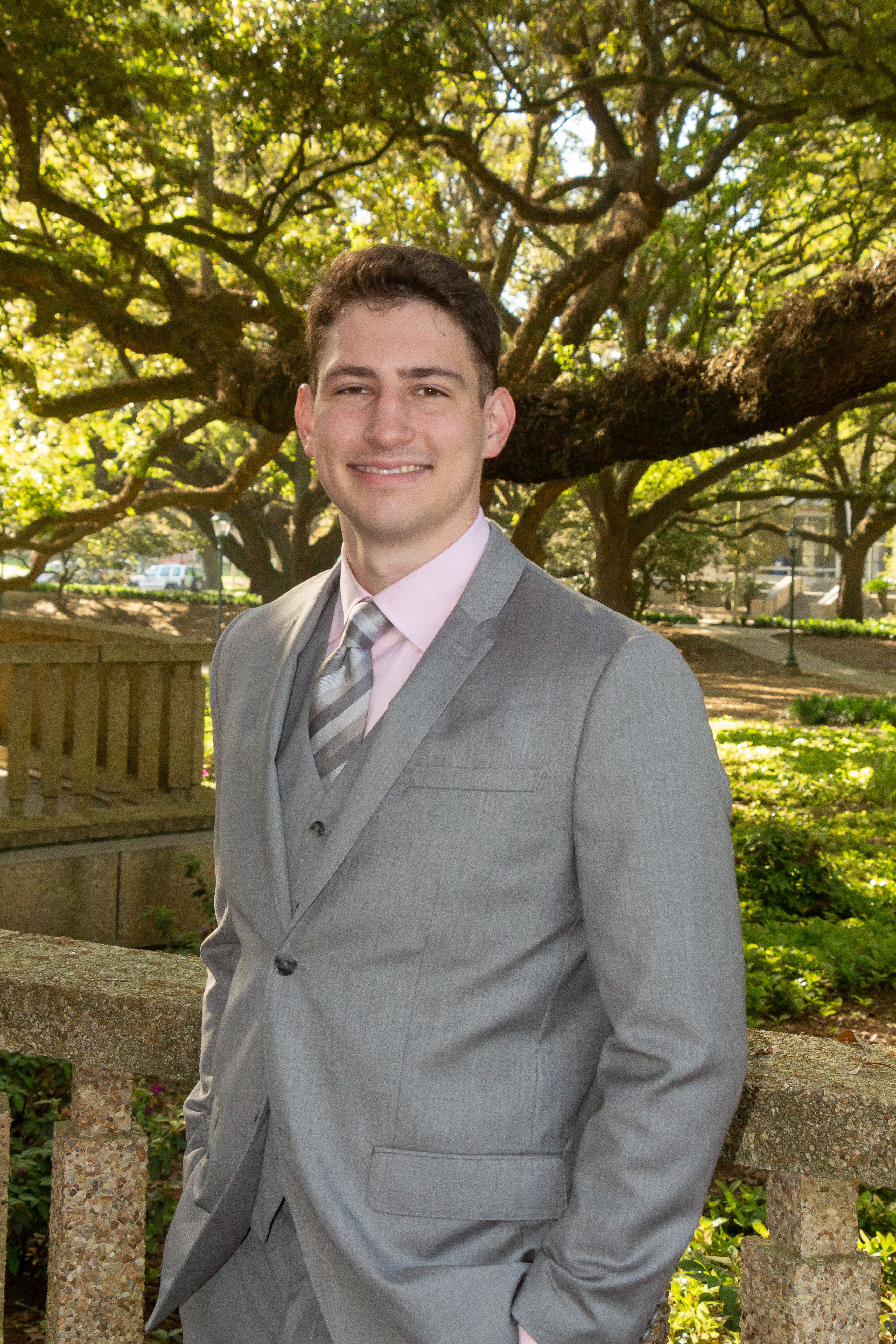 Boles served as the first student director for Project 225, a program within the Roger Hadfield Ogden Honors College aimed at fostering long-term service activities within the Baton Rouge community. As student director, Boles oversaw 65 volunteers and five different projects for more than 700 volunteer hours. He also worked as a Supplemental Instructor for introductory biology for science majors and cofounded “Be PrEpared,” an initiative to raise awareness for HIV prevention. He participated in Dance Marathon and the Honors College’s LASAL Scholars program for all four years in college, and served as a Louisiana Governor’s Fellow in the Louisiana Department of Health researching disease prevention during his junior year. After graduation, Boles plans to work as a public health physician specializing in infectious disease epidemiology, transforming Louisiana into a leader in compassionate, evidence-based population health policy. 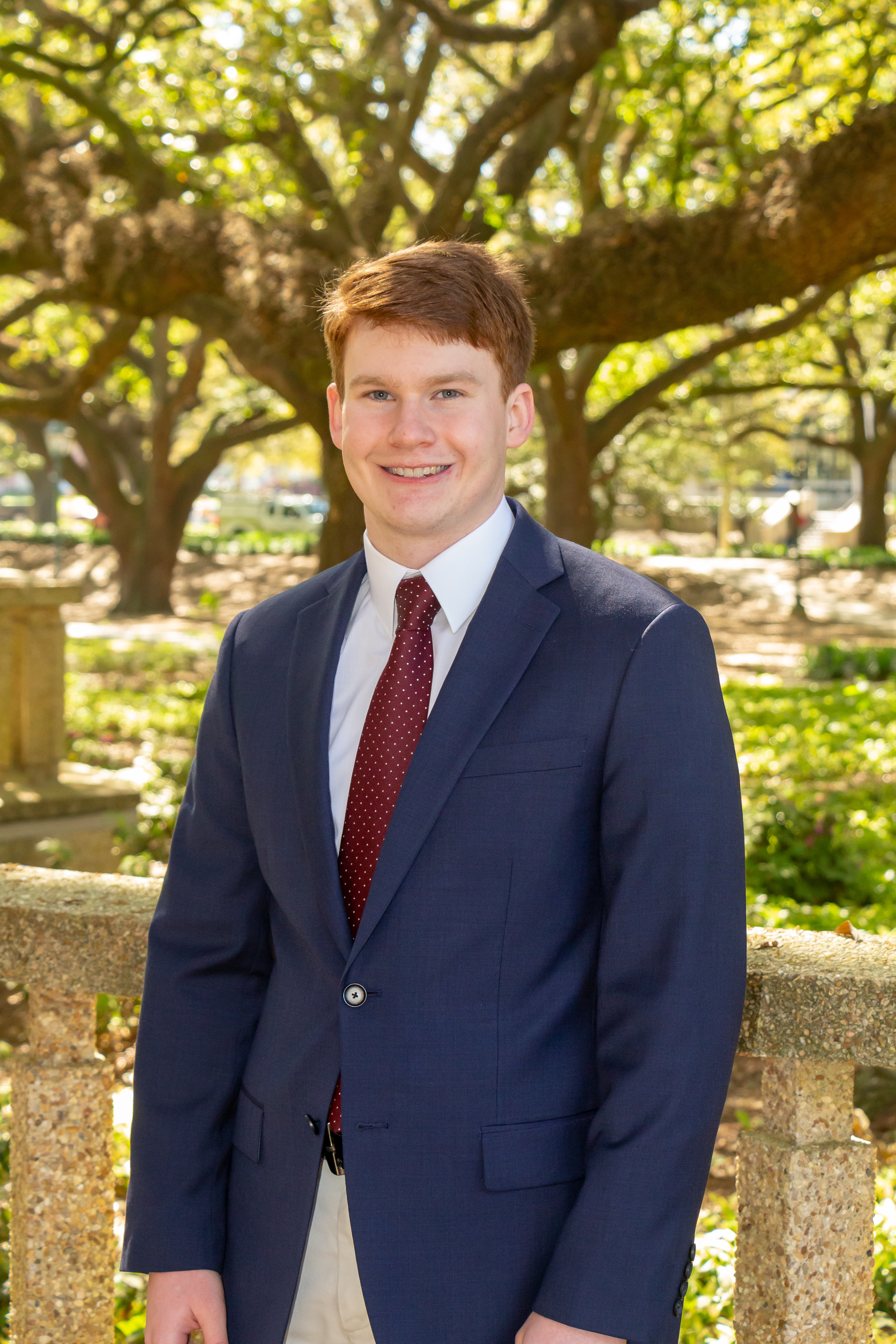 Brands spent his four years at LSU conducting undergraduate research for the Warner Research Laboratory. He volunteered with both the Big Buddy youth outreach program and as a cabin leader for Camp Erin, a weekend camp that provides emotional support for children who have experienced the death of a parent. Brands worked as a medical scribe at Our Lady of the Lake Medical Center, where he said, “spending time at the hospital has served as a constant reminder of why I decided to pursue a career in medicine.” He also served as an Honors College advocate, where he helped recruit and give tours to potential new honors students. After graduation, Brands plans on attending medical school, where he hopes to incorporate active citizenship into daily practice and patient care. 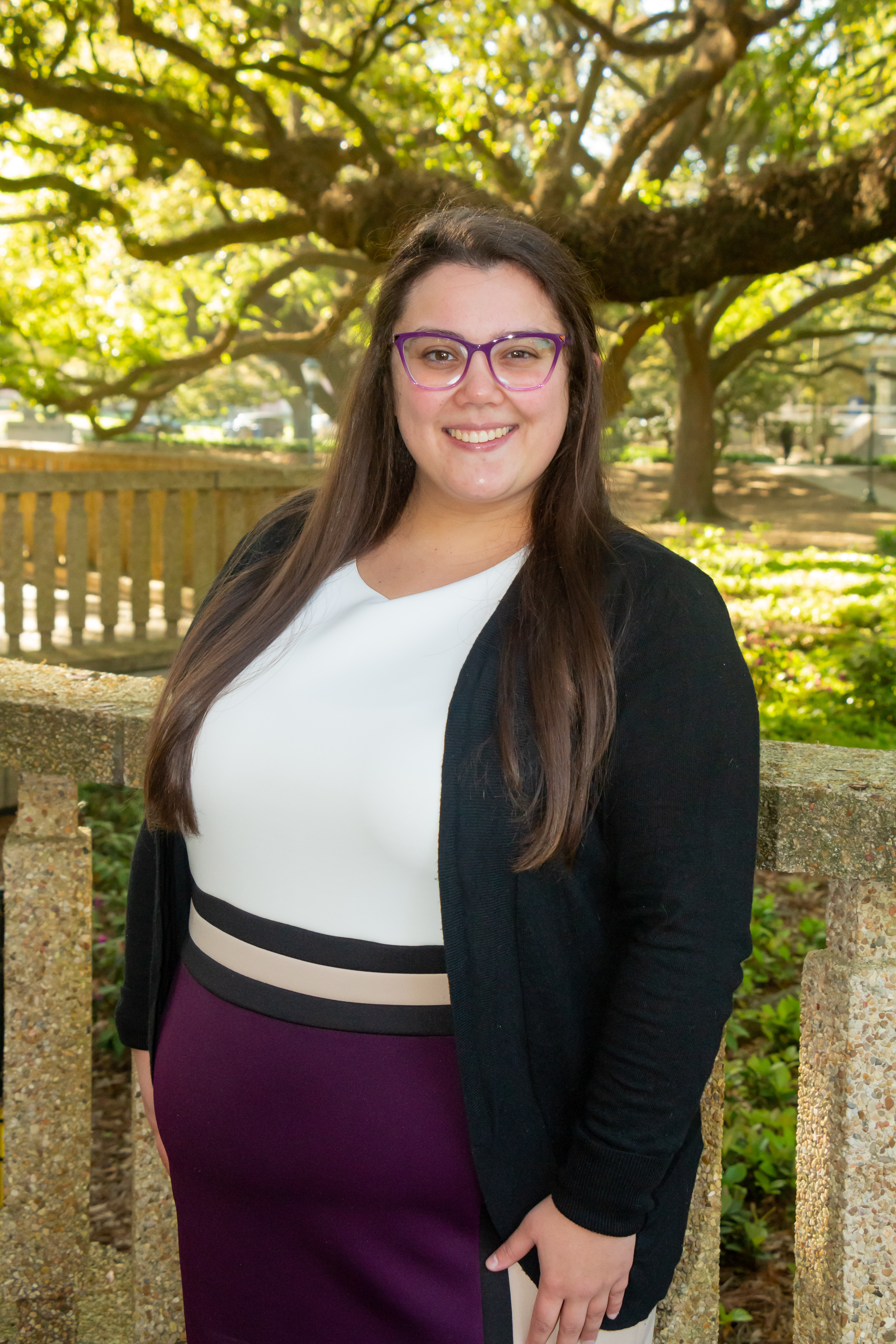 Clancy devoted her time at LSU to welcoming new students to campus through her involvement with LSU Ambassadors, STRIPES and Bengal Bound. She served as a STRIPES leader for three years where she welcomed incoming freshmen to campus as a small group leader, program assistant and as the event, logistics and hospitality coordinator. As a junior, Clancy was chosen to be a member of the University Student Leadership Cabinet, where she and other student leaders served as the voices of LSU students in administrative decisions. During her sophomore year, she traveled to Haiti and the Domincan Republic on a medical mission trip, where she received hands-on medical training and was exposed to new cultures and the health care systems of developing countries. Inspired by her trip, she then served as the student promotor and historian for the International Service and Learning Club at LSU and went on to start Tigers Pay Tribute, an organization that supports U.S. active duty military members. When she graduates, Clancy will attend law school and hopes to become a criminal defense attorney so she can help those who have been overlooked by the criminal justice system. 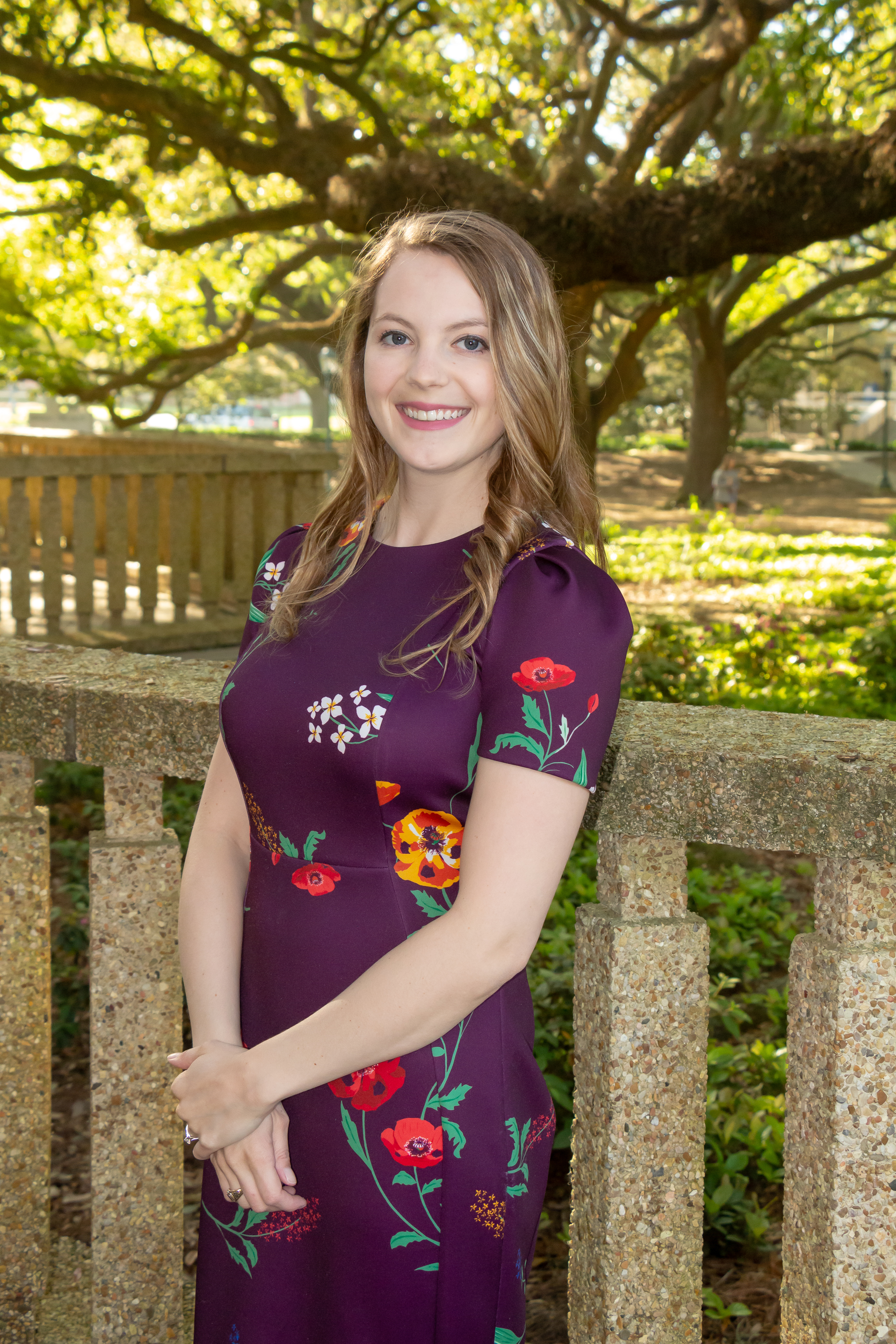 Coker played an active role in the College of Engineering as an undergraduate student. She was involved with the Society for Women Engineers, where she served as social chair. She was a member of the Freshman Leadership Council and the College of Engineering Council during her freshman and sophomore years and served in the Society of Peer Mentors, where she offered advice and support to other engineering students. Coker was a member of the outreach team for the Chevron Leadership Academy, a scholarship organization for students studying engineering or business. Coker implemented service learning in her mechanical engineering curriculum, where she was part of a partnership with the Louisiana School for the Visually Impaired to 3D print durable glasses and lenses for children. Outside of her work with the College of Engineering, Coker contributed more than 100 volunteer hours with Connections for Life, a thrift store and support organization operated by formerly incarcerated women seeking to make a positive change. 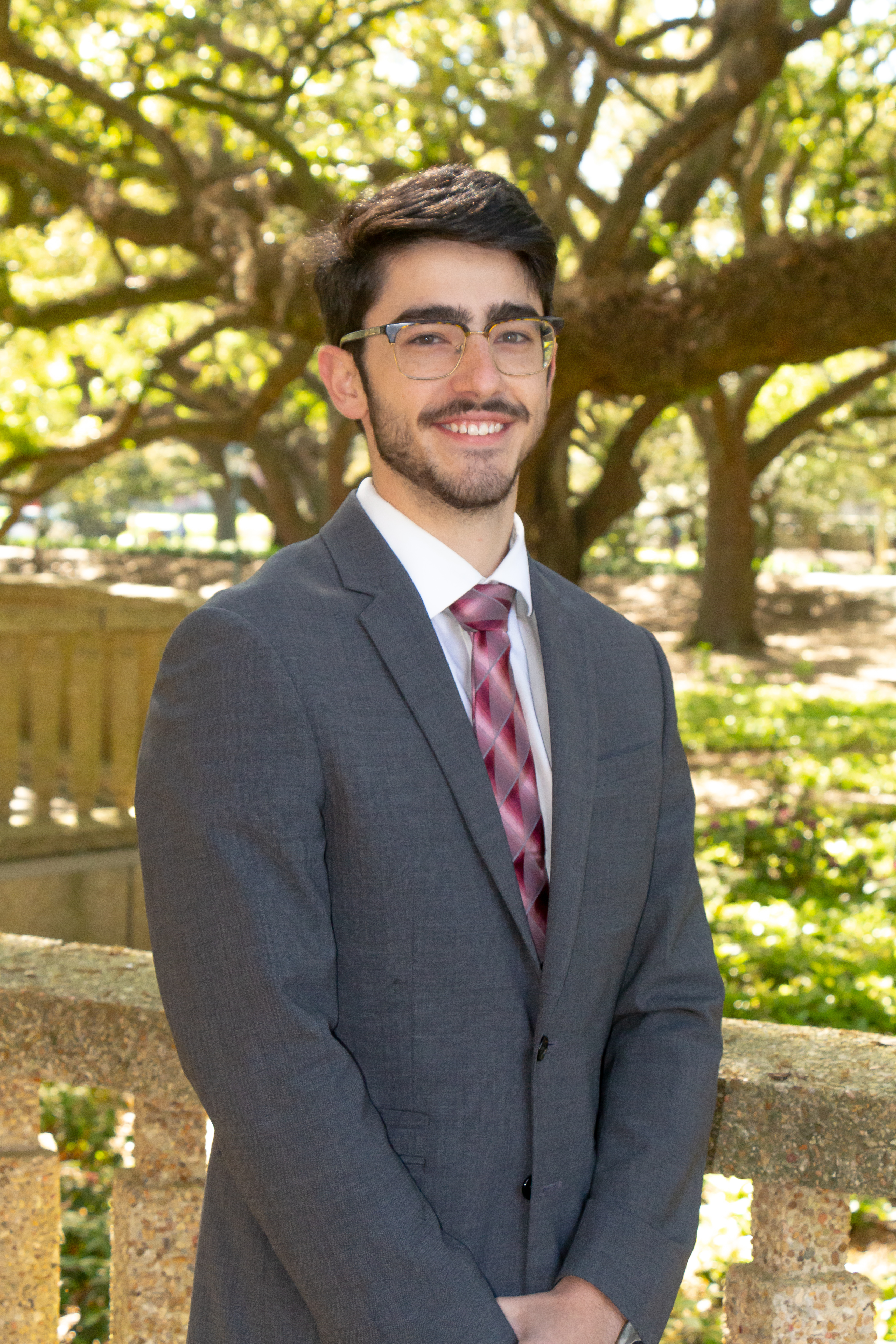 DeCorte co-founded Camp Kesem at LSU, a summer camp that provides free, week-long summer camps to children who have a parent battling cancer. His team competed against 11 other universities to form a chapter of the national organization in Louisiana. For three years, he has worked in the Jeyaseelan Lab, where he studies the immune system. Through his research at LSU, DeCorte was chosen to be a research trainee at the Baron Lab at Harvard Medical School to study how the immune system reacts to septic shock. DeCorte, along with fellow Tiger Twelve member William Boles, co-founded “Be PrEPared,” an organization that promotes HIV awareness, testing and treatment. DeCorte also volunteered through Alpha Epsilon Delta as a Youth Oasis Mentor during his sophomore and junior years. As a mentor, he assisted the Youth Oasis, a shelter for runaway and abandoned youth in the Baton Rouge area. After graduation, DeCorte plans to become a physician, where he can have the “noble responsibility of treating each patient with the same levels of compassion and empathy.” 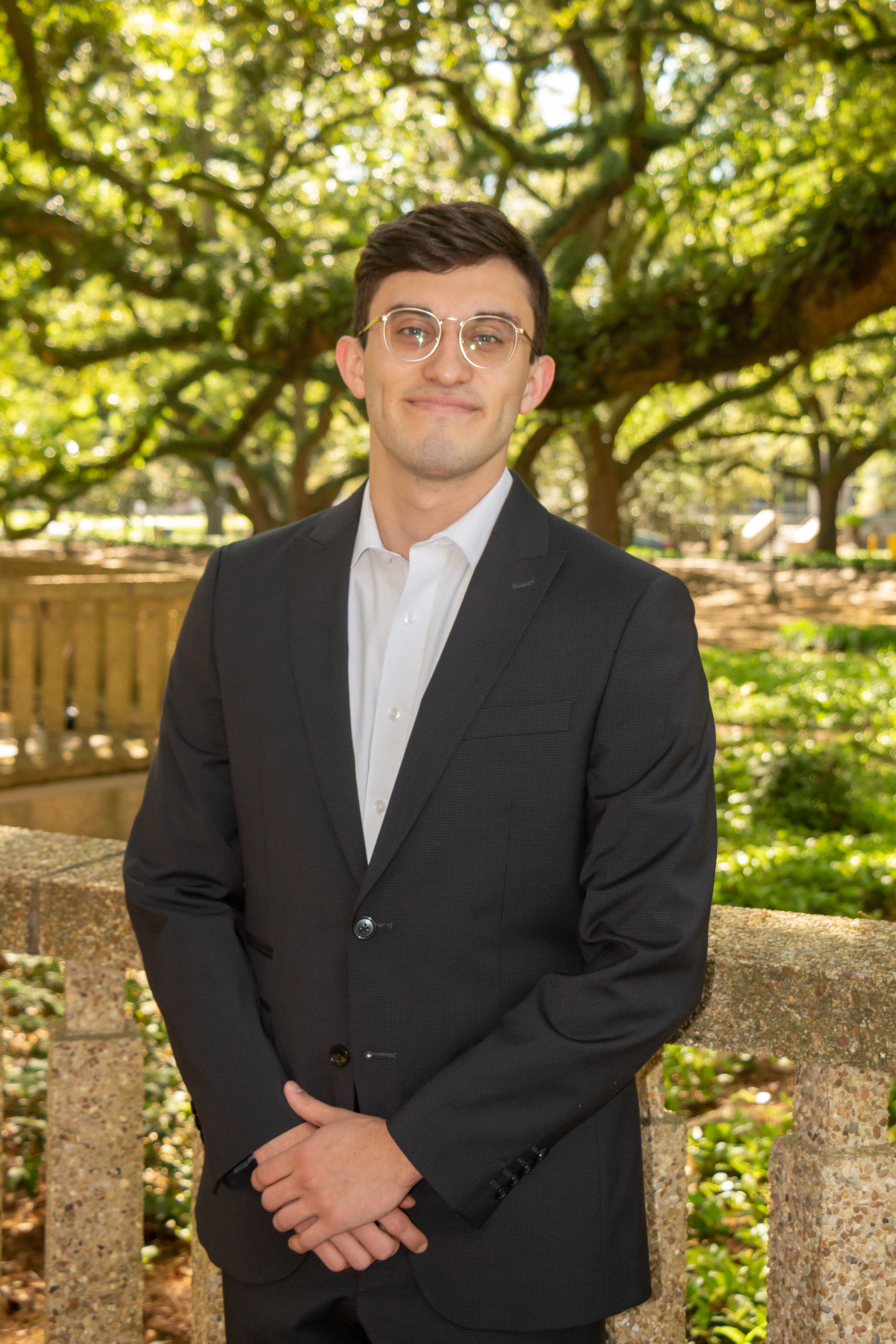 Levreault-Lopez spent four years on the LSU Swimming and Diving team, where he also served as team captain. His experience with the swim team exposed him to many community service opportunities, including volunteering at the Knock Knock Children’s Museum and helping renovate homes that were damaged in and around Baton Rouge during the 2016 floods. His petroleum engineering curriculum also played a large role in his time at LSU. Levreault-Lopez worked as a student intern at Marathon Oil and researched reservoir engineering in North Dakota as a junior. Levreault-Lopez was a member of both the Society of Hispanic Professional Engineers, where he served as treasurer, and Pi Epsilon Tau Petroleum Engineering Honors Society, where he was vice-president. When he graduates, Levreault-Lopez will be working as a petroleum engineer for ExxonMobil and plans on passing down the lessons he received during his time at LSU. 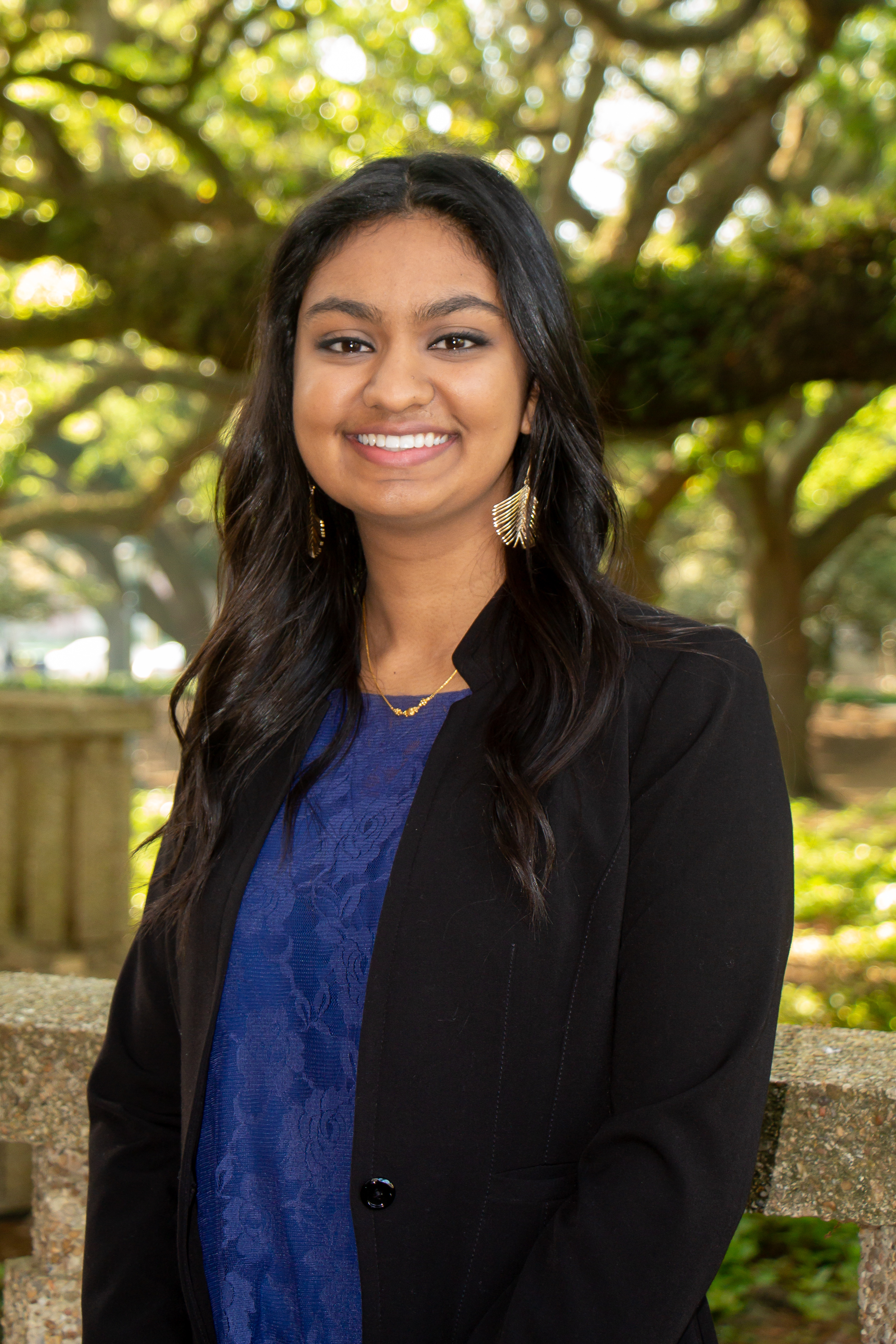 Mallenahalli served in Student Government for three years, first as a student senator, and then as both a member at large and president of the College of Engineering Council. She was a member of Engineering Ambassadors for four years, and she also volunteered in the surgery department at Baton Rouge General for four years. Mallenahalli is a Stamps Scholar, which means she was one of the top incoming freshmen of the Class of 2019. Mallenahalli served as the Stamps Scholar Society president and organized events for current and potential Stamps Scholars at LSU. She spent the summer of her junior year studying in Madrid with the Atlantis Project Clinical Shadowing Fellowship, where she learned about Spain’s public health care system, shadowed physicians for 30 hours a week and attended cultural and professional development seminars. She also participated in a medical mission trip to Honduras and helped provide basic health care in rural areas of the country. She plans on attending medical school after graduating in May. 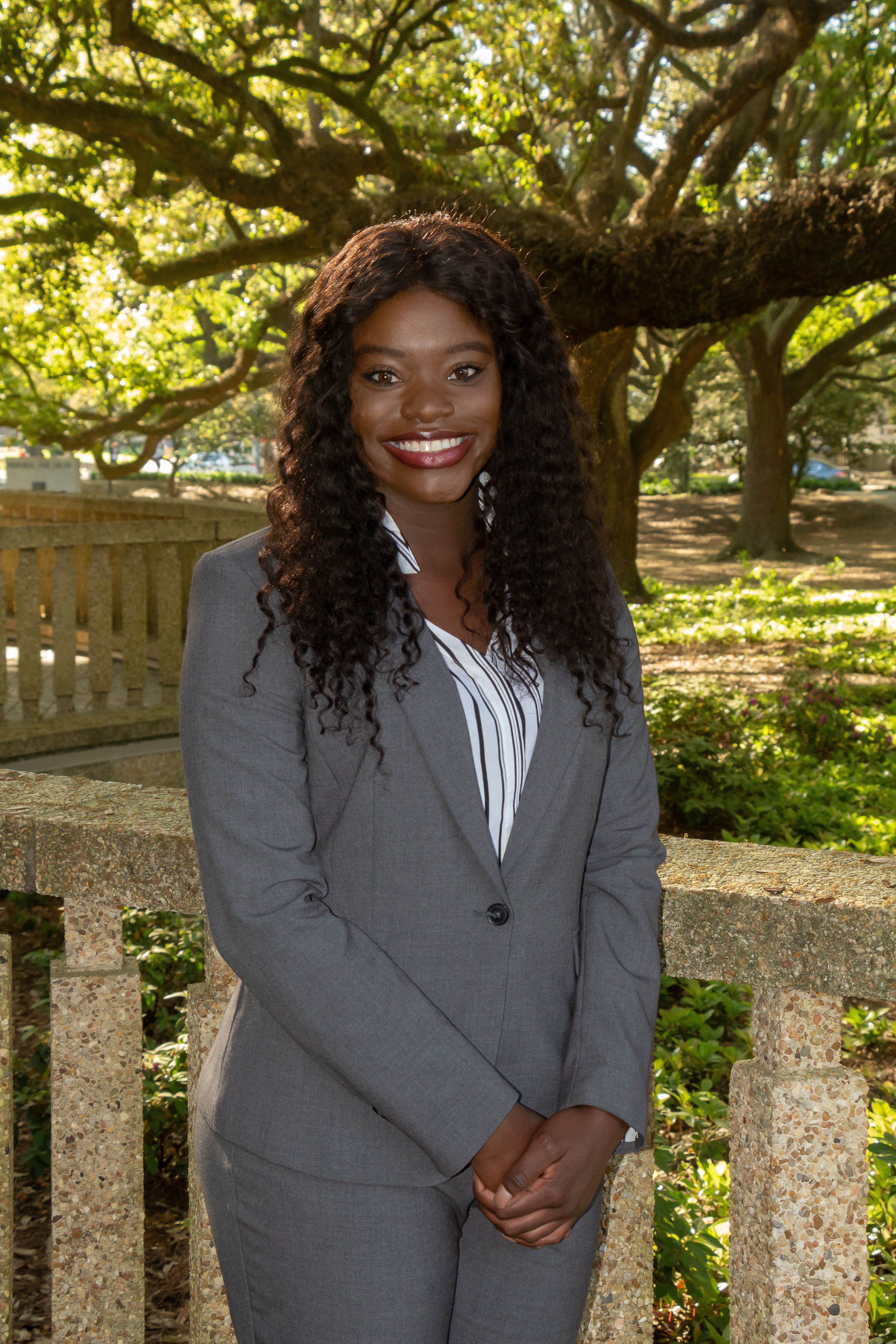 Obot was an active member of Alpha Epsilon Delta Honors Society from her freshman to senior year. She was elected philanthropy chair for her junior and senior year, and she oversees the group’s mentoring partnership with the Youth Oasis shelter for runaway and abandoned children in the Baton Rouge area. Obot worked as a resident assistant for three years and helped on-campus students feel comfortable and secure in residence halls. She coordinated with the Center for Academic Success and Mental Health Services to ensure all her residents get the tools they needed to flourish in college. As a senior, Obot was selected for a medical internship in Costa Rica, where she worked with a physical therapist and received hands-on patient care experience. She plans on attending medical school after graduation and hopes to provide health care to the homeless and those in low-income communities. 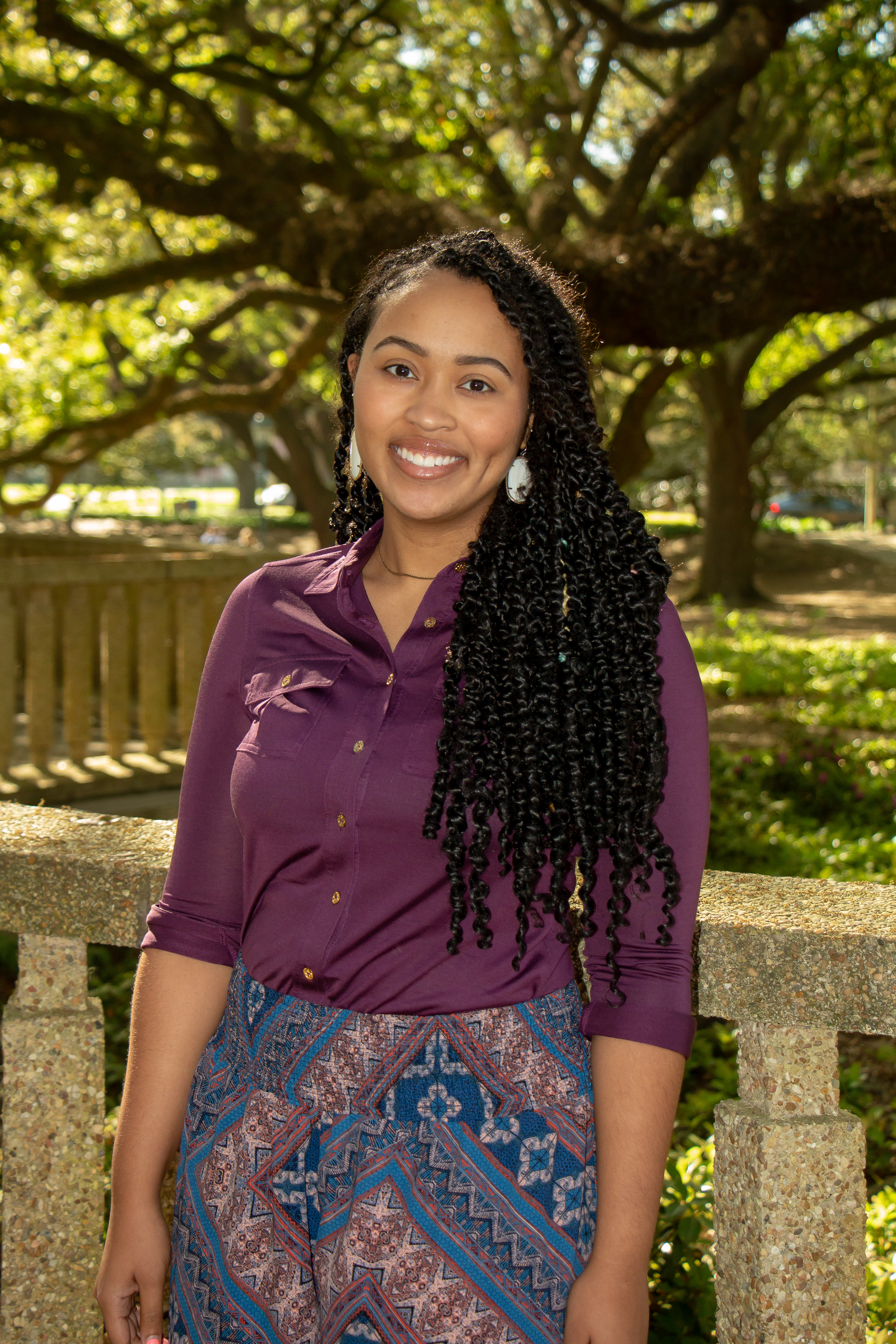 Pink attended LSU as an undergrad and is currently a graduate student in the Department of Kinesiology. While at LSU, she has been a member of Alpha Kappa Alpha Sorority Inc., and served as president of the National Panhellenic Council, overseeing LSU’s NPHC chapters and working with the Panhellenic Council and Interfraternity Council to promote Greek unity. Pink was one of five students who sat on President F. King Alexander’s Greek Life Task Force, working to combat hazing and ensuring a safe and positive Greek experience for all members. She was also one of the six Greek leaders selected to be a member of the Greek Life Institute, an organization that created leadership development workshops for Greek organizations depending on the chapter’s needs. She volunteered with Baton Rouge Mayor Sharon Weston-Broome’s election campaign as a lead coordinator and remained as an active volunteer after her election. After she earns her master’s degree, Pink plans on attending law school. 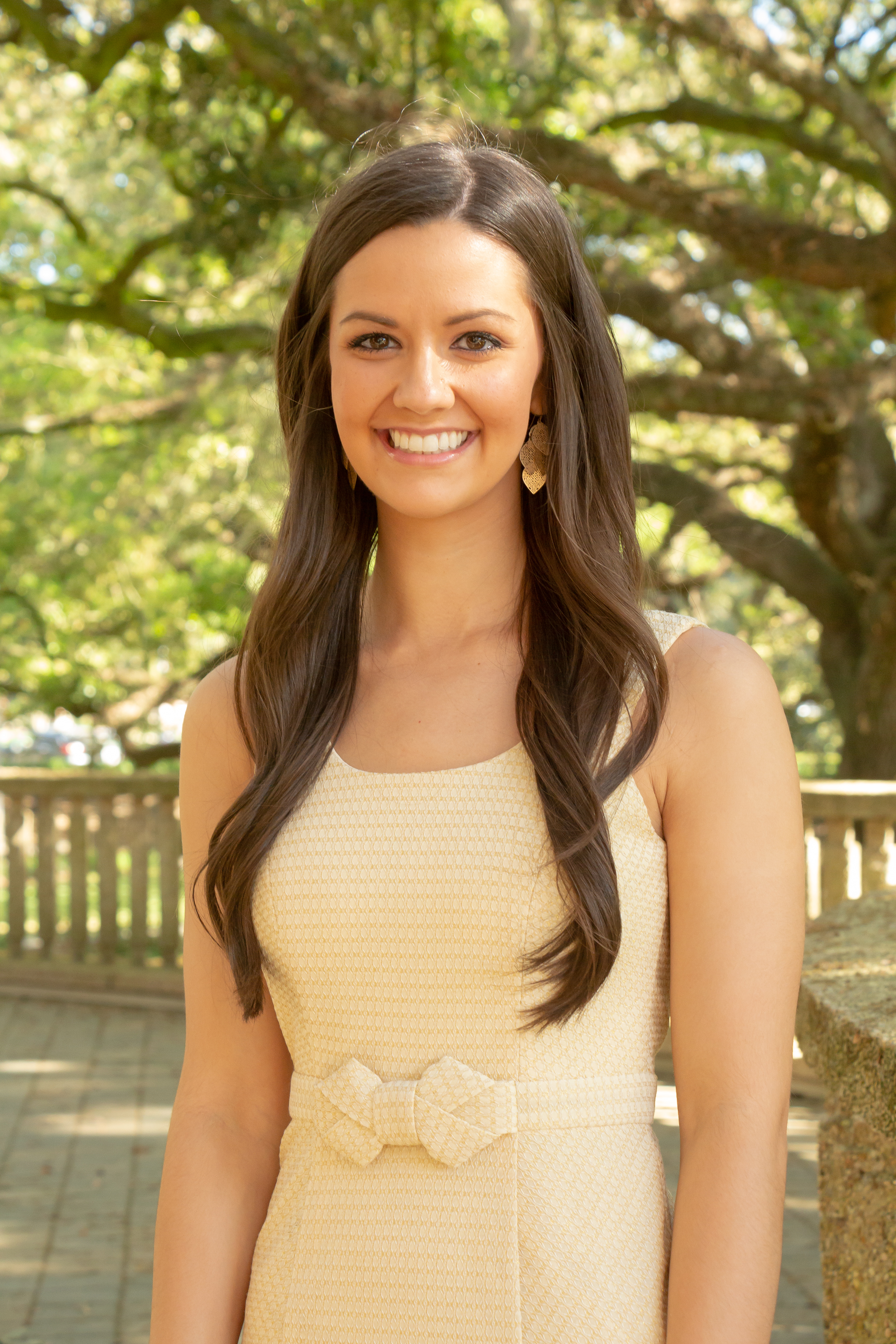 Robillard was involved with a number of different activities during her college career at LSU. She was a member of the STRIPES orientation team for four years, welcoming incoming students to campus. Robillard was a member of the Homecoming Student Committee Executive Board and helped plan events for the student body during Homecoming Week. She served as the Homecoming Court Chair and was responsible for interviewing candidates and planning all Homecoming Court-related activities. She was also a member of the LSU Ambassadors Membership Committee and helped select the ambassadors who would represent LSU to the community and potential students. She was part of the University Student leadership Cabinet and attended monthly meetings to address and solve problems affecting students. Robillard also volunteered at the Down Syndrome Awareness Buddy Walk for three years and at Geaux Big Baton Rouge for four years. When she graduates, Robillard hopes to become an early childhood educator and treat each of her students with “dignity and respect for individual differences.” 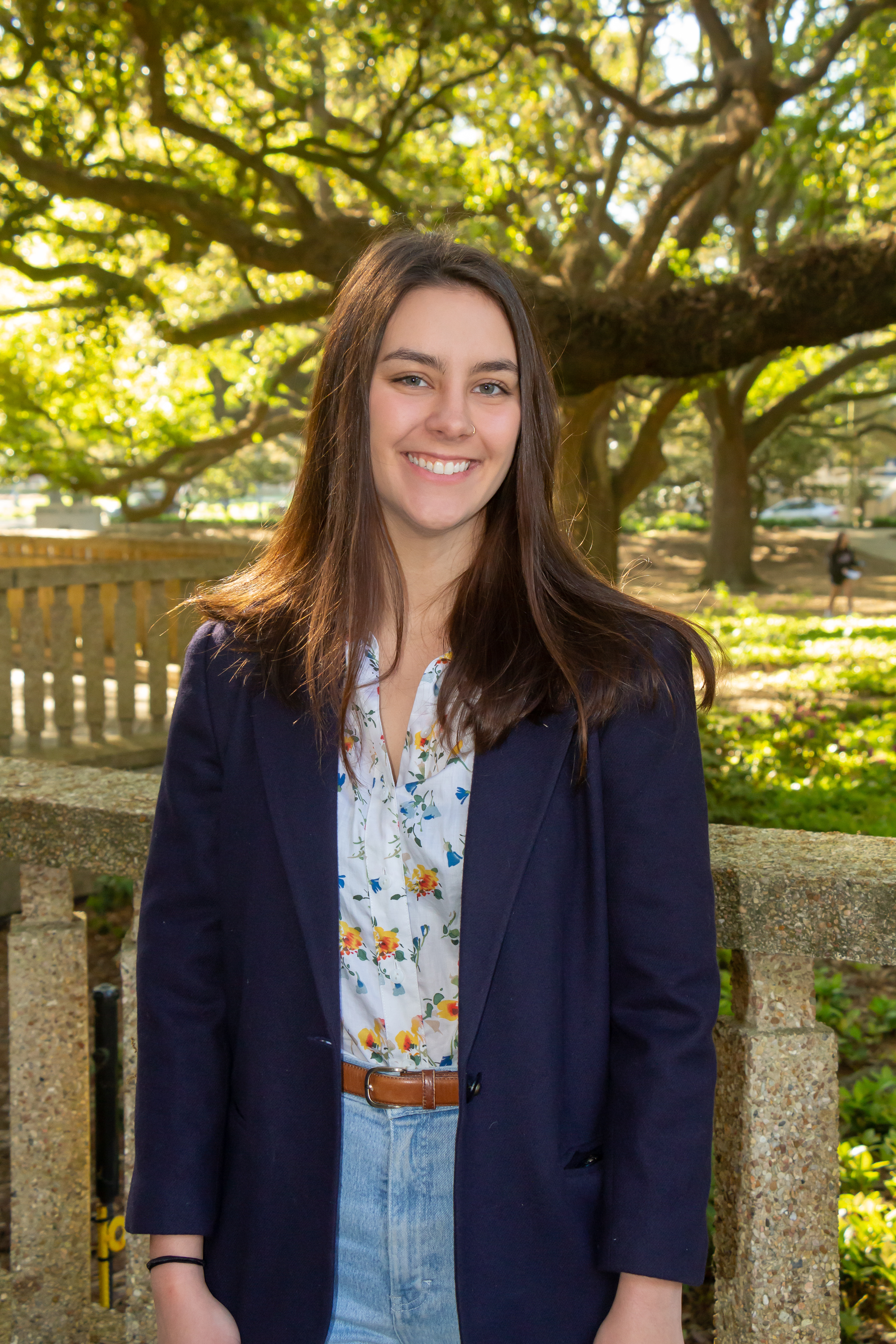 Smith devoted her time at LSU to studying the environment and how humans relate to a changing climate and world. She has been a member of the Louisiana Service and Leadership Program through the Honors College for four years. She co-founded the LSU Sierra Student Coalition as a freshman to support environmental legislation in the Louisiana Legislature and worked as a student coordinator with LSU Campus Sustainability to encourage environmentally-friendly habits on campus. As a sophomore, Smith received the Roger Hadfield Ogden Leader’s Award for her work on “Louisiana Gone,” a photography and literary project documenting the state’s most vulnerable coastal communities. She presented her work at LSU Discover Day and was featured in both the LSU Research and LSU Alumni magazines. During her junior year, Smith collaborated with Associate Professor of Religious Studies Michael Pasquier for the Coastal Voices podcast and video series exploring the relationship between Louisianans and the environment. The same year, she spoke at TEdXLSU about her research in front of more than 800 audience members. Smith hopes to work with a nonprofit environmental organization after graduating. 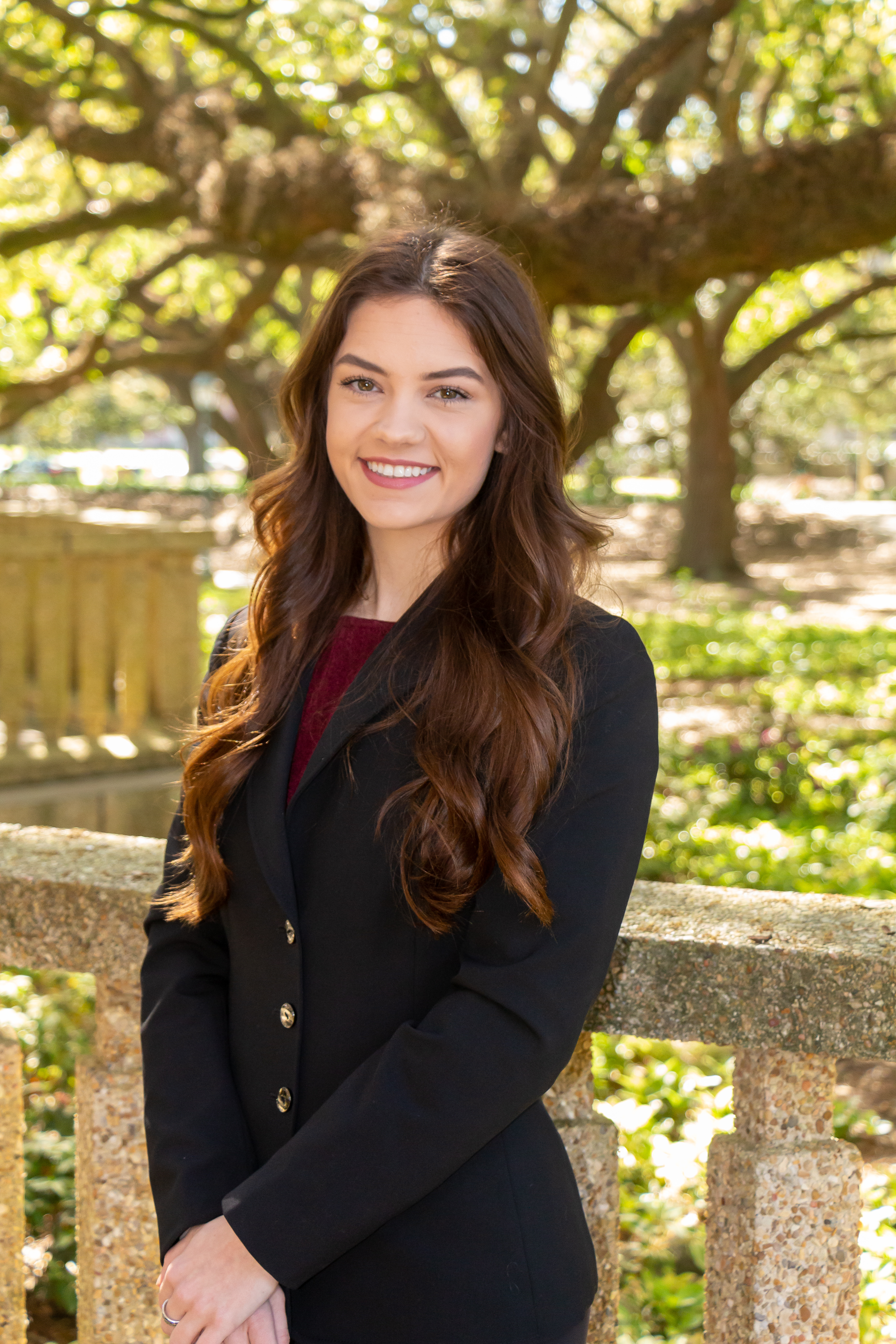 Thomas has conducted research through the Personnel Assessment and Applied Decision Making Lab on campus as a research assistant for two years, where she helped develop and execute and independent research project and presented her work at an undergraduate research conference. During the summer before her senior year, Thomas worked through the LSU ASPIRE Summer Research Program as an assistant in an industrial psychology lab. She was a member of the Psi Chi Psychology Club and Honors Society for three years. She served as the Volunteer Coordinator for the organization and was responsible for planning partnerships with organizations like Geaux Big Baton Rouge. Thomas was also a member of the University Student Leadership Cabinet, where she worked on creating an inclusive atmosphere on campus. Outside of school, Thomas worked at a law firm in downtown Baton Rouge, which she believes will help her as an organizational and industrial psychologist in the future.

For more information on the Tiger Twelve, visit https://lsu.edu/studentaffairs/traditions/tiger-twelve.php