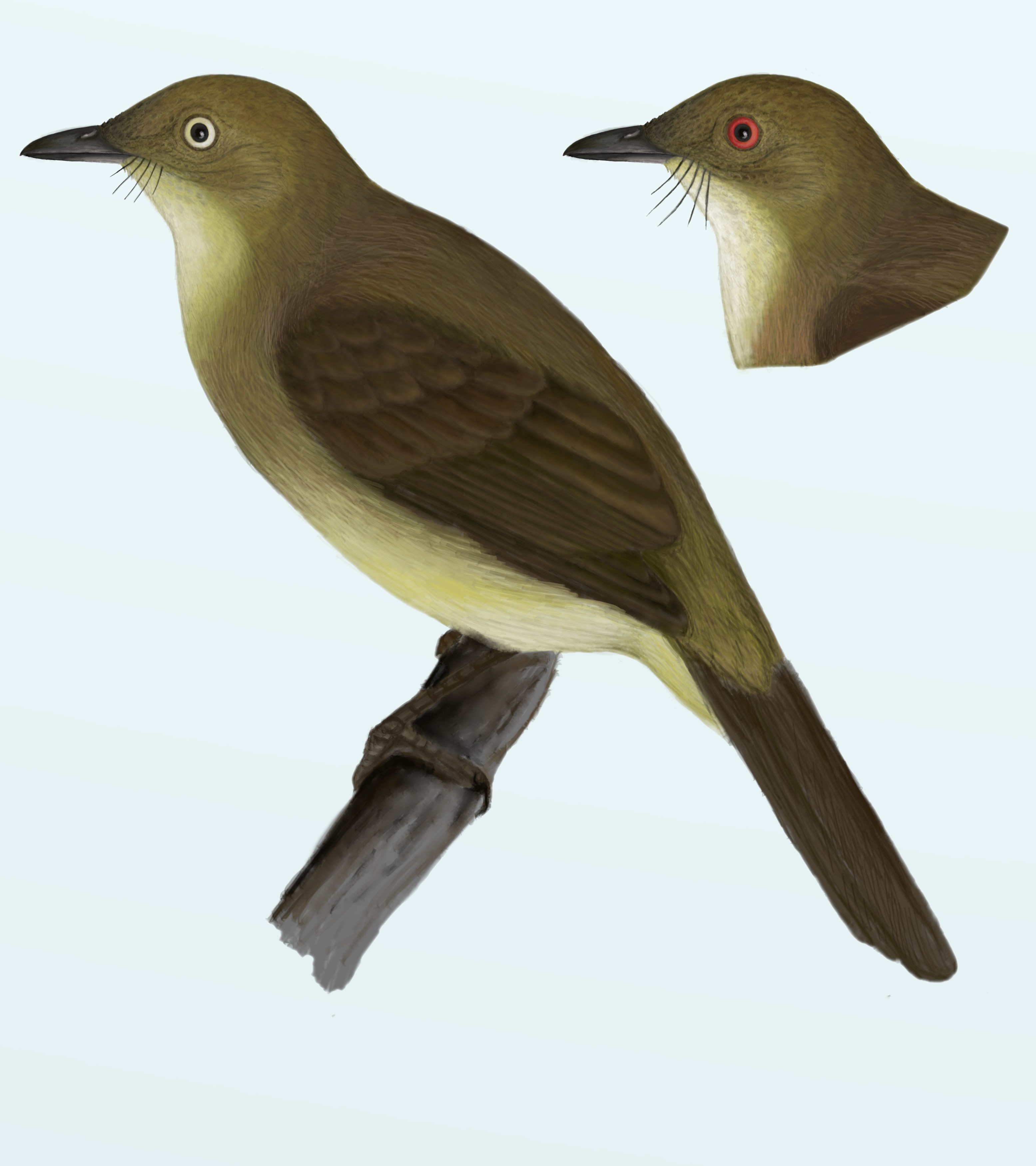 BATON ROUGE – In the lush, lowland rainforests on the island of Borneo lives a rather common, drab brown bird called the Cream-vented Bulbul, or Pycnonotus simplex. This bird is found from southern Thailand to Sumatra, Java and Borneo. In most of its range, it has white eyes. On Borneo, however, most individuals have red eyes, although there are also a few with white eyes. For 100 years, naturalists have thought the eye-color difference on Borneo was a trivial matter of individual variation. Through persistent detective work and advances in genetic sequencing technology, LSU Museum of Natural Science researchers have discovered that the white-eyed individuals of Borneo in fact represent a completely new species. Their discovery of the Cream-eyed Bulbul, or Pycnonotus pseudosimplex, was published recently in the scientific journal, the Bulletin of the British Ornithologists’ Club.

“One of the reasons we knew we had a new species as opposed to just a variant of another species was because the two populations — the red-eyed and white-eyed populations — actually occur together on Borneo. You can go to a site and see both of these birds. One of the theories of speciation is if two birds co-occur in the same area, and they are not interbreeding, then that’s a definitive sign that they are different species,” said Subir Shakya, lead author and LSU Department of Biological Sciences Ph.D. student.

Shakya made the discovery after he had returned to LSU from an expedition to Sumatra. Back at LSU, he was sequencing the DNA of several bird specimens from Sumatra and comparing them to specimens from other sites in the region to determine the degree of genetic relatedness of various species from the different islands and the mainland of Asia, which is a common practice after returning from fieldwork. Several bulbuls from Borneo and the surrounding region were among the specimens he compared; however, the white-eyed Cream-vented Bulbuls from Borneo appeared genetically distinct from all the other white-eyed and red-eyed Cream-vented Bulbuls he examined. Further work to understand this discrepancy led to the conclusion that the white-eyed birds from Borneo were in fact a new species.

“We had found white-eyed individuals of the bulbul in old-growth hill forest in Crocker Range National Park in 2008 and in Lambir Hills National Park in 2013; and a group from the Smithsonian found them in Batang Ai National Park in 2018. All of these areas are in Malaysian Borneo,” said co-author Fred Sheldon, the LSU Museum of Natural Science curator of genetic resources and Shakya’s Ph.D. advisor.

Specimens are preserved at the LSU Museum of Natural Science, which houses the world’s largest collection of genetic samples of birds from Borneo and Sumatra as well as the Smithsonian and University of Kansas Museum. White-eyed and red-eyed individuals look almost exactly the same, except for eye color.

“This discovery was made due to Subir’s dogged detective work, and a little serendipity,” Sheldon said.