Jazz Brunch for honorees to be held Feb. 23 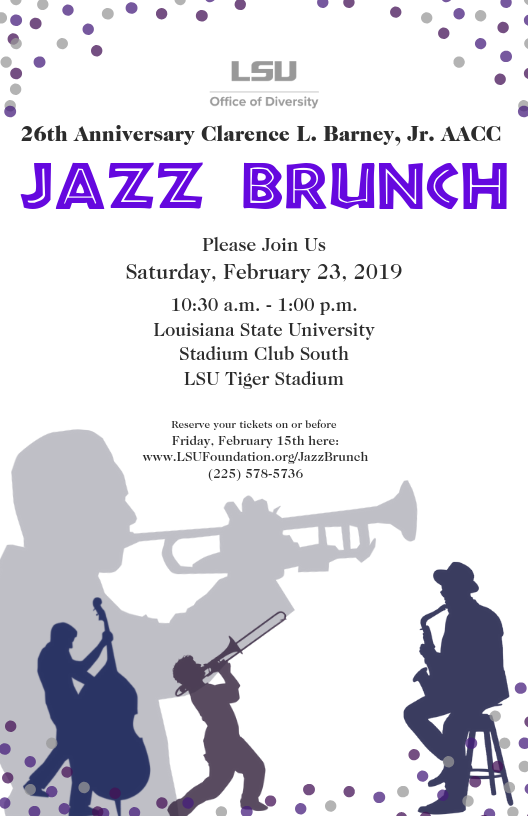 In 2019, the Distinction in Diversity award will be presented to three path breaking LSU alumna. The honorees are:

Chief Justice Bernette Joshua Johnson is the 25th Chief Justice of the Louisiana Supreme Court. As a community organizer with the NAACP Legal Defense Fund, Chief Justice Johnson’s work paved the way for desegregation of schools throughout the Deep South and social security benefits and minimum wage for domestic laborers. As an intern with the United States Department of Justice Civil Rights Division, Chief Justice Johnson worked on discrimination cases that would structure the framework for the implementation of the Civil Rights Act of 1964. She was the first woman elected to serve Orleans Parish Civil District Court in 1984, and established a system that utilized the training and skills of certified social workers to support matters of the family. Chief Justice Johnson is committed to the pursuit of equality.

Kim Hunter Reed, Ph.D., was unanimously selected as the ninth commissioner of higher education by the Louisiana Board of Regents in April 2018. Commissioner Reed has extensive higher education and government experience having served in President Barack Obama’s administration as deputy undersecretary at the U.S. Department of Education, leading postsecondary diversity and inclusion work, supporting strong student and outcomes-focused policies and aggressive national outreach efforts and also leading the White House Initiative on Historically Black Colleges and Universities. She has received numerous honors, including LSU Alumna of the Year, Public Administration Institute; Mom of the Year, Jack and Jill of America, Baton Rouge Chapter; and has been featured in Daughters of Men, a national publication highlighting outstanding African American women and their fathers.

Linda Smith Griffin has served the LSU community for more than 30 years and currently holds the title head of resource description & metadata services with LSU Libraries. In addition to her leadership in Library Sciences, Smith Griffin is a member of the LSU African and African American Studies program and has been an integral part of many of the programs and events that celebrate the African American Community at LSU, most notably the Black Faculty and Staff Caucus and the Black Scholars award program. Smith Griffin has been instrumental in promoting increasing diversity in the Library sciences and as a result of her work she has received numerous awards and honors including the Louisiana Library Association Anthony H. Benoit Mid-Career Award, 2014 and being named a Harvard Leadership Institute for Academic Librarians, 2011 Fellow.

“We are truly excited about this year’s Jazz Brunch, and our always amazing list of honorees,” said Dereck J. Rovaris Sr., vice provost for diversity and chief diversity officer. “Please make plans to join us for good food, good music, and a good time recognizing the 2019 Distinction in Diversity class.”

The LSU Office of Diversity, or ODEI, a division of the Office of Academic Affairs committed to fostering inclusive educational opportunities and an equitable workforce environment at LSU. ODEI provides leadership to ensure that diversity is a vital component in all decision-making processes on all administrative, academic, budgetary, and strategic planning fronts. ODEI is also responsible for supervising and guiding professional units whose purpose and mission is to promote understanding and respect for difference. These units include the Office of Multicultural Affairs, the Clarence L. Barney Jr. African American Cultural Center and the Women’s Center. Similarly, ODEI works closely with university committees, commissions, task forces and affinity groups whose charge is to support underrepresented LSU community members. For additional information about the programs and initiatives of the LSU Office of Diversity, visit www.lsu.edu/diversity.