Fish Species Rapidly Diversified in the Wake of Dinosaur Extinction 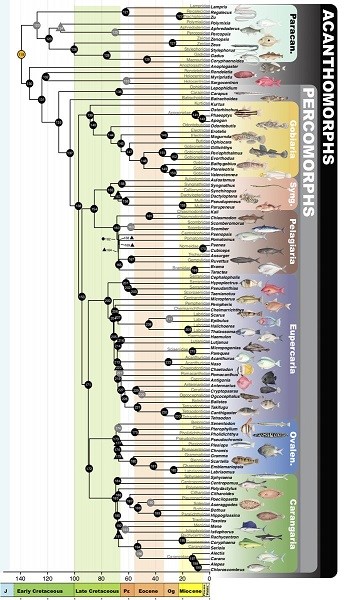 BATON ROUGE - Following a mass extinction event 66 million years ago known as the “end of the dinosaurs,” or the “K-Pg extinction,” fishes began to rapidly diversify, giving way to the incredible number of fish species known today. This finding, published recently in Nature Ecology and Evolution by researchers at LSU, the University of California Los Angeles, the University of Michigan and Yale updates the understanding of relationships among the largest group of fish species, known as the spiny-rayed fishes, as well as the timing of their diversification.

“Following the K-Pg extinction, most mammals, reptiles and birds diversified into the many species that inhabit our planet today. However, the evolutionary story of the largest group of vertebrate organisms, the roughly 18,000 species of spiny-rayed fishes, has remained much less clear until this study. Previous molecular studies involving spiny-rayed fishes have suggested their diversification was not tied to the K-Pg extinction, while other studies of fish paleontology have been more equivocal,” said Brant Faircloth, who is a senior author on the manuscript and an assistant professor in the LSU Department of Biological Sciences.

The researchers involved in this project used techniques they have been developing since 2008 to collect data from roughly 1,000 locations across the genomes of 120 species representing the major evolutionary lineages of spiny-rayed fishes. Then, they used these data to construct an evolutionary tree for these fishes, and they combined the evolutionary tree that they built with data from fish fossils to determine the approximate dates at which major fish groups began to diversify.

“Prior studies had a hard time determining relationships among major fish groups because they were trying to solve a really big problem with a relatively small amount of data. We collected 10- to 100-fold the amount of data normally used from a wide variety of fish species to help untangle the tangled parts of the fish evolutionary tree so that we could say something about relationships among fish groups as well as something about the timing of the evolutionary events that gave rise to many fish species,” Faircloth said.

After analyzing their data, the researchers were able to better understand the relationships among and diversification of several ancient fish lineages like cods, dories and trout-perches. They were also able to understand previously confusing relationships within a large group of fish known as the percomorphs, which includes offshore species known to Louisiana anglers like marlins, sailfish, tunas and mahi-mahi as well as inshore species like flounder and red drum.

This research was supported by grants from the National Science Foundation.