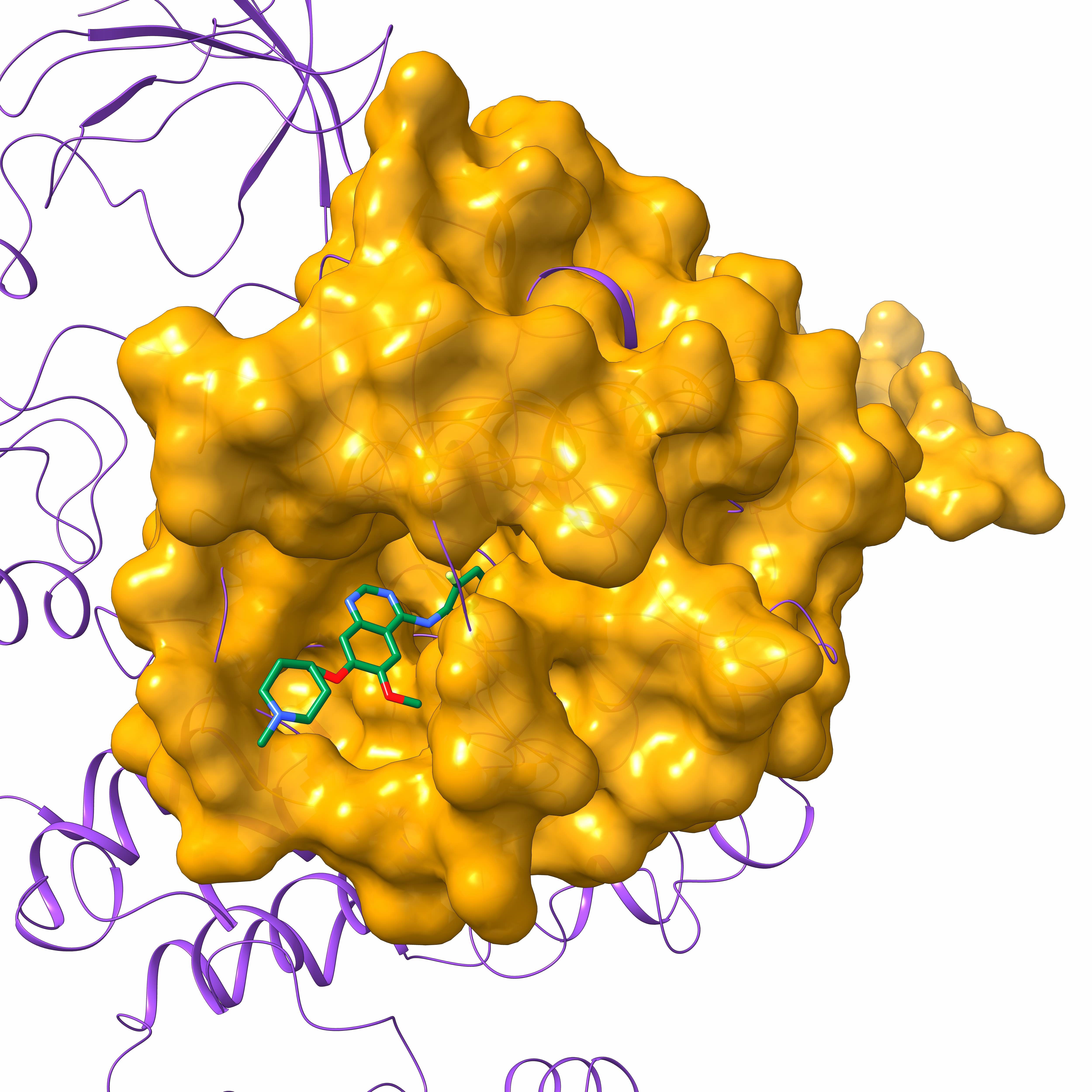 Chemotherapeutic vandetanib bound to its main target, Protein Tyrosine Kinase 6, or PTK6, in purple, which is involved in many cancers including gastrointestinal tumors and ovarian cancers. By modeling vandetanib and PTK6 complex, researchers at LSU found the KRAS protein to also contain a similar drug-binding site and therefore to be a good match for the same drug. The computer-generated model of KRAS in gold with vandetanib depicts the predicted interaction.Photo Credit: Misagh Naderi, LSU.

BATON ROUGE – One in 10 people in America is fighting a rare disease, or a disorder that affects fewer than 200,000 Americans. Although there are more than 7,000 rare diseases that collectively affect more than 350 million people worldwide, it is not profitable for the pharmaceutical industry to develop new therapies to treat the small number of people suffering from each rare condition. Researchers at the LSU Computational Systems Biology group have developed a sophisticated and systematic way to identify existing drugs that can be repositioned to treat a rare disease or condition. They have fine-tuned a computer-assisted drug repositioning process that can save time and money in helping these patients receive effective treatment.

“Rare diseases sometimes affect such a small population that discovering treatments would not be financially feasible unless through humanitarian and governmental incentives. These conditions that are sometimes left untreated are labeled ‘orphan diseases.’ We developed a way to computationally find matches between rare disease protein structures and functions and existing drug interactions that can help treat patients with some of these orphan diseases,” said Misagh Naderi, one of the paper’s lead authors and a doctoral candidate in the LSU Department of Biological Sciences.

“In the past, most repurposed drugs were discovered serendipitously. For example, the drug amantadine was first introduced to treat respiratory infections. However, a few years later, a patient with Parkinson’s disease experienced a dramatic improvement of her disease symptoms while taking the drug to treat the flu. This observation sparked additional research. Now, amantadine is approved by the Food Drug Administration as both an antiviral and an antiparkinsonian drug. But, we can not only rely on chance to find a treatment for an orphan disease,” said Dr. Michal Brylinski, the head of the Computational Systems Biology group and associate professor in the Department of Biological Sciences and at the Center for Computation & Technology at LSU .

To systematize drug repurposing, Naderi, co-author Rajiv Gandhi Govindaraj and colleagues combined eMatchSite, a software developed by the same group with virtual screening to match FDA approved drugs and proteins that are involved in rare diseases. LSU super computers allows them to test millions of possibilities that will cost billions of dollars to test in the lab. This work was supported by the National Institute of General Medical Sciences of the National Institutes of Health [R35GM119524].