Do You Kneaux Mardi Gras?

02/09/2018
BATON ROUGE - It might be all fun and games but LSU actually has experts that study the holiday season. From the history and traditions to the economic impact, laissez les bon temps rouler* with us in Baton Rouge. Translation: *Let the good times roll.

What’s the deal with the parades?
The parades are a Mardi Gras tradition and organized by Mardi Gras Krewes (pronounced “crew”). Each Krewe has its own royal court and hosts many parties and balls during Carnival Season. Their final event is typically the parade, which will take place during the weeks leading up to Mardi Gras. There are parades all over the state, including Baton Rouge, but the most famous parades take place in New Orleans.

Purple, green and gold
The colors of Mardi Gras were selected by the Krewe of Rex in 1872. Purple represents justice, green represents faith and gold represents power. 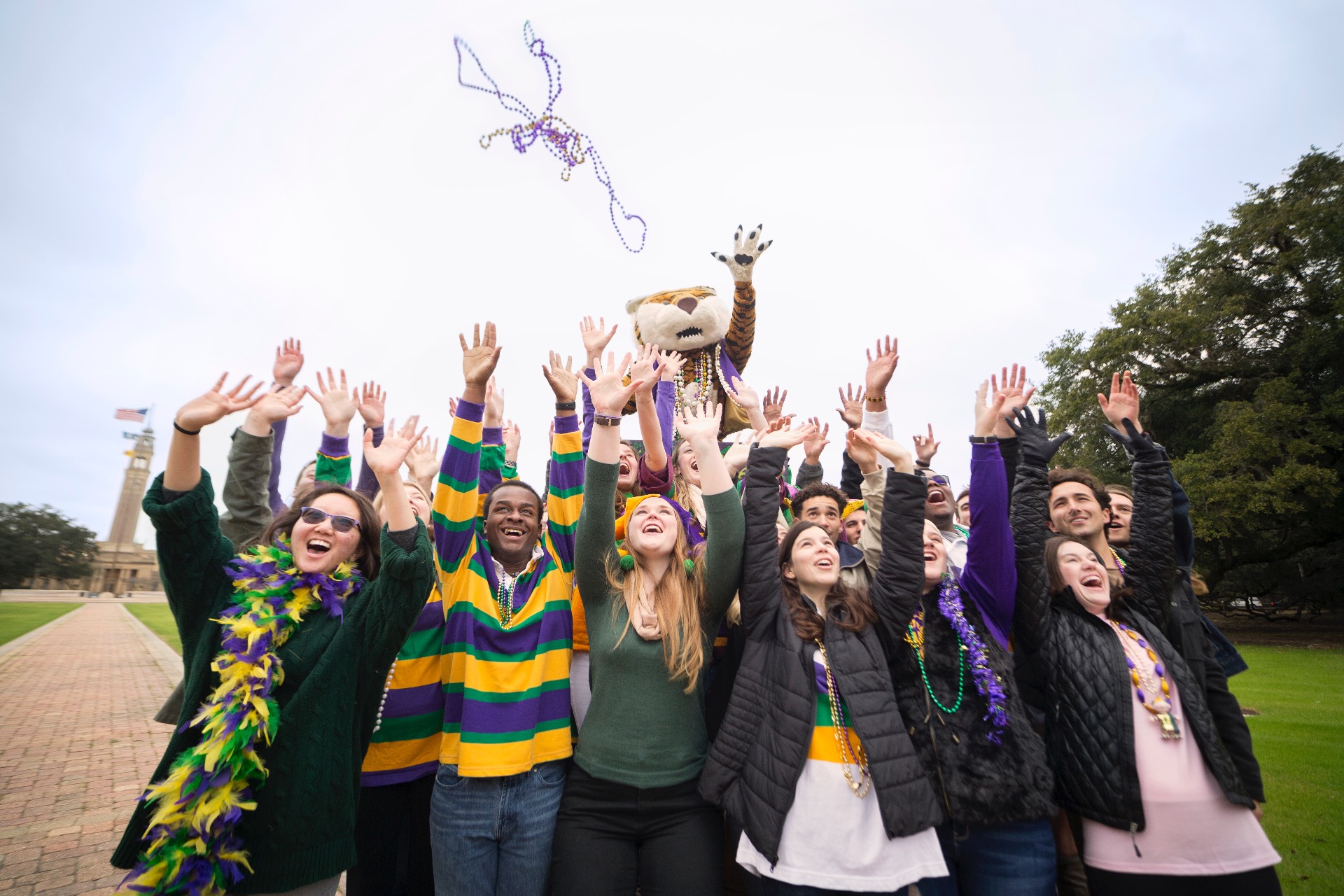 LSU students and Mike the Tiger get in the Mardi Gras spirit, with beads on the parade ground.Photo Credit: LSU

King Cake
King cakes are braided and baked cakes, topped with icing and sugar in the Mardi Gras colors. In Louisiana, it is traditionally reserved for enjoyment during the Carnival Season. It is first served on King’s Day (January 6) and lasts through the end of Mardi Gras. A traditional king cake comes without a filling inside, but overtime many bakeries began adding cream cheese, fruit or chocolate.

King Cake Baby
Traditionally, a small plastic baby representing Jesus is hidden in the cake. Tradition says whoever gets the king cake piece containing the plastic baby is supposed to provide the king cake for the next gathering.

“Throw me something, mister!”
Heads up! As you watch the parade, get ready to catch some beads. Beads of different colors, shapes and sizes are thrown from the floats to the revelers below, along with a variety of other trinkets, including doubloons, cups, plush toys, and more. You’ll often hear parade-goers shout “throw me something mister!” Today, women also ride in the parades.

LSU’s Purple and Gold Colors
LSU’s colors were influenced by the Mardi Gras colors. As the story goes, in preparation for LSU’s first football game against in-state rival Tulane in 1893, LSU football coach Dr. Charles E. Coates, football team captain (and later Louisiana governor) Ruffin Pleasant and others went to Reymond’s store in Baton Rouge. They were in search of colorful ribbon to adorn the football uniforms. The store had stocked up for Carnival Season, but the green ribbon had not yet arrived. Coates thought the purple and gold made a great combination, so he bought out their stock. From then on, LSU’s colors were purple and gold. You can read the complete account of Dr. Coates’ story here.