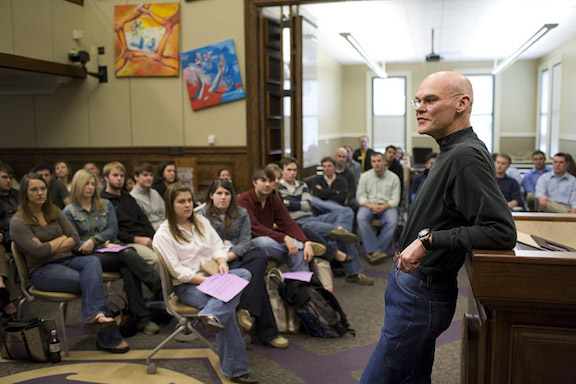 LSU alumnus James Carville will join the faculty of LSU’s Manship School of Mass Communication in January to teach in the school's political communication concentration.Photo: LSU

Carville, who has taught at Tulane University in New Orleans for nine years, will teach in Manship’s political communication concentration. His courses will include a seminar in contemporary political issues and a class for seniors that deeply examines one significant issue, such as the erosion of the Louisiana coastline.

The “Ragin’ Cajun” invoked his LSU roots in explaining his return to the university.

“The mother ship has called my pirogue home,” he said.

Of course, a pirogue is a long narrow canoe used by Cajuns.

“James epitomizes the mission of the Manship School,” Dean Jerry Ceppos said. “That mission is to teach and conduct research at the intersection of media and public affairs. James is a living example of that intersection.”

Carville, who was born in Carville, La., is an LSU and LSU Law Center graduate. He has a long association with the Manship School and frequently speaks on campus. He was the Manship School commencement speaker in 2015, when he made a strong plea for more state support for LSU. He recently hosted a discussion at the Roger Hadfield

Ogden Honors College about a new biography of Gen. William Tecumseh Sherman. He is a member of the Manship School’s Hall of Fame.

Carville’s most famous campaign was for President Bill Clinton in 1992, when he was Clinton’s senior political adviser. He also drew national attention when he led Harris Wofford, behind by 40 percentage points, to a landslide victory in a 1991 special election for U.S. senator from Pennsylvania. After that race, columnist Sandy Grady called Carville the “Michelangelo, Napoleon and Edison of politics.”

Carville’s work at the Manship School will be supported by philanthropic gifts, Ceppos said.

Journalism education at LSU began 104 years ago. Today, the Manship School teaches political communication, journalism, public relations and digital advertising at the bachelor’s, master’s and doctoral levels. An accreditation team of experts in mass communication who studied the school in 2015 deemed it in “the ranks of the country’s strongest programs.”