Cannibalism: A New Way to Stop the Spread of Disease 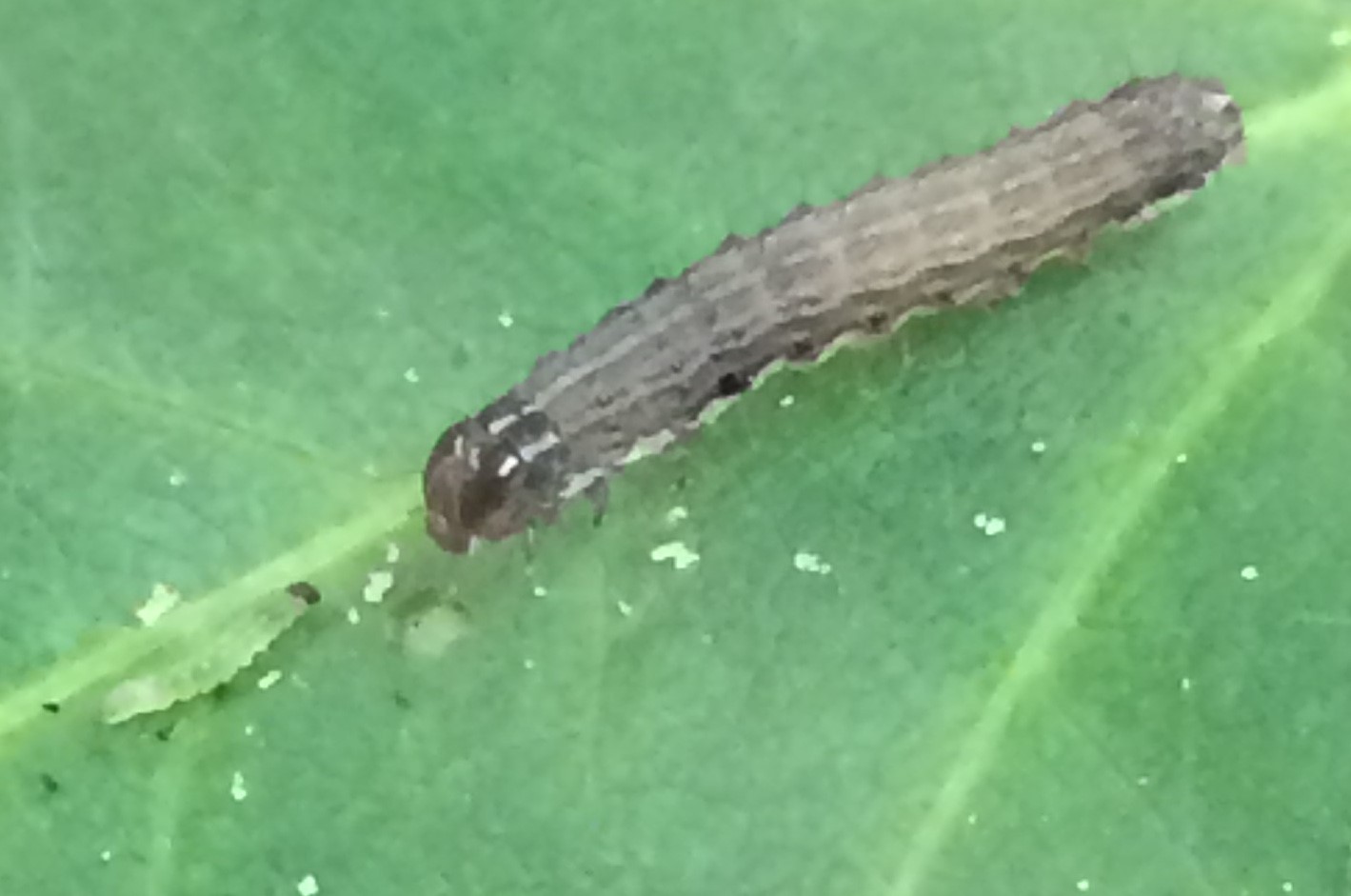 A large fall armyworm is about to cannibalize a smaller diseased armyworm of the same age.

BATON ROUGE – Cannibalism may be just what the doctor ordered, according to a new study that will be published in American Naturalist led by former LSU postdoctoral researcher and current University of California, San Diego, or UCSD, postdoctoral researcher Benjamin Van Allen, along with other individuals in Bret Elderd lab’s at LSU and Volker Rudolf’s lab at Rice University.

LSU Department of Biological Sciences Associate Professor Bret Elderd investigates how various factors affect disease transmission in insects, particularly in Lepidoptera, an order of insects that includes butterflies and moths. With his lab group, Elderd looks at how factors including protective chemicals produced by plants that insects eat and changes in temperature can either quicken or dampen the spread of disease. By studying these and other factors, Elderd’s work may help other researchers create environmentally friendly bioinsecticides to protect crops like soybeans, for example. But Van Allen, Elderd and colleagues are finding that cannibalism may be an understudied factor in the spread of disease.

Elderd was recently conducting field-based experiments with fall armyworm caterpillars, or Spodoptera frugiperda, the larval life stage of the fall armyworm moth, to mimic and study the spread of a lethal baculovirus in this lepidopteran when he noticed something strange.

The experiments involved enclosing individual plants in mesh bags, releasing diseased larvae into the bags to contaminate the plant with a virus and following the spread of the disease as the healthy individuals consume the plant and therefore the virus. At the end of these experiments, when Elderd and his lab group were collecting healthy larvae from the plants and transporting them back to the lab to study more closely how the disease had spread, they ran into what was at first simply an annoying problem. Elderd and his colleagues were returning from the field with bags full of half-eaten fall armyworms.

“With the fall armyworms, we would lose a large portion of a number of samples we transported back to the lab because when the larvae got close to each other during transport, they started to eat one another,” Elderd said. “I started cursing my luck for conducting these studies with these dang bugs that would eat each other.”

At first, Elderd considered moving to a different species of insect to continue his research. But over time, he started questioning whether, rather than being simply a nuisance to his field experiments, cannibalism among armyworms was serving a bigger purpose.

“Cannibalism is ubiquitous in nature,” Elderd said. “A cannibalistic species will readily eat others of its own species, or conspecifics. But for a long time cannibalism was seen as an aberration when it occurred in any species. This may be related to bias in how we observe cannibalism in nature. As population densities increase, cannibalism and disease spread can also increase. Since cannibalism may increase in populations affected by a disease outbreak, we tend to associate cannibalism in a population with the spread of disease.”

“A cannibal that eats a victim has essentially found ‘the perfect meal,’” Elderd said. “If I’m a cannibal, my prey has all the protein ratios and micronutrients that I need, because it’s essentially me. The disadvantage, however, is that my victim is also the perfect host for any suite of pathogens or parasites that would also like to feast on me. The thought here is that I shouldn’t be cannibalistic because I have a high probability of contracting a particular disease if I feed on an organism of my own species.”

This risky and often disadvantageous behavior has pervaded biological research for many years, with the thought that cannibalism can bolster the spread of disease through a population. A study published just this week in Nature Ecology & Evolution highlights how some plants produce defensive chemicals that may prompt insects that feed on them to become more cannibalistic. This study shows how cannibalism can have important consequences and may drive interactions between species, Elderd said, but the primary disadvantage in terms of cannibalism is still being eaten, not necessarily being the cannibal. Using theoretical models and examples from across the animal kingdom, Elderd and his research group show in their new American Naturalist paper that cannibalism is not always disadvantageous for the cannibals. Cannibalism may in fact decrease the spread of disease and prevent disease outbreaks in some species.

“We are flipping the paradigm, with regards to cannibalism,” Elderd said. And it makes sense, if looked at from the perspective of a population susceptible to disease outbreaks.

“What a disease really wants to do is reproduce,” Elderd said. “Say that I have the flu. To anthropomorphize this virus, it wants ideally to spread to more than just one other person. In our paper, we explore the idea that if I have a disease and another organism of my own species eats me, any pathogen or parasite I have is only spread to one other individual. An outbreak would require transfer of that pathogen or parasite to multiple individuals, not just one other cannibal.”

Cannibalism by itself is a poor mechanism for the spread of disease, said study author Ben Van Allen. When a cannibal eats a healthy individual, it kills a potential future host for the disease, which is also bad for the disease. When a cannibal eats an infected individual, there’s always the possibility that a cannibalistic individual won’t even catch a parasite or contract a disease its prey has, which makes cannibalism especially dangerous from the parasites perspective, Elderd said.

“There’s a chance that a disease might essentially become extinct within a population through such one-on-one cannibalism, unless more than one individual feasts on victims, and even then the disease must spread to more than one cannibal more often than it spreads to none,” Elderd said. Volker Rudolf, one of the American Naturalist study co-authors, originally proposed this idea.

When an individual caterpillar becomes sick with this virus, its growth is stunted. Sick individuals end up being smaller and easier for healthy individuals to consume, or cannibalize.

“What we show in our paper is that if these caterpillars become cannibalistic and consume smaller, sick individuals in the population, transmission of this virus through the population is reduced,” Elderd said.

The paper also contrasts the human agricultural practice of culling livestock to remove sick individuals and prevent disease spread, for example in the case of foot-and-mouth outbreaks in livestock, to cannibalism. It turns out that cannibalism can be far more effective at culling diseased individuals from a population.

Elderd describes this study as a math-based and theoretical investigation of cannibalism. The next step is conducting field-based experiments to demonstrate these ideas empirically.

“We didn’t include it in this paper, but we do have empirical work showing that our theories hold water,” Elderd said.

“In some species, mothers will cannibalize their young to weed out the sick and weak, ensuring higher survival rates for healthy offspring,” Elderd said. “But there hasn’t been a lot of empirical research to back up these observations.”

Elderd and his colleagues have provided a first step toward empirical evidence of exactly how cannibalism affects disease spread in insect populations. While there are parasites that may benefit from cannibalism indirectly by exploiting loopholes in the host life cycle, Van Allen’s work suggests that at least for some populations, cannibalism may be just what the doctor ordered.