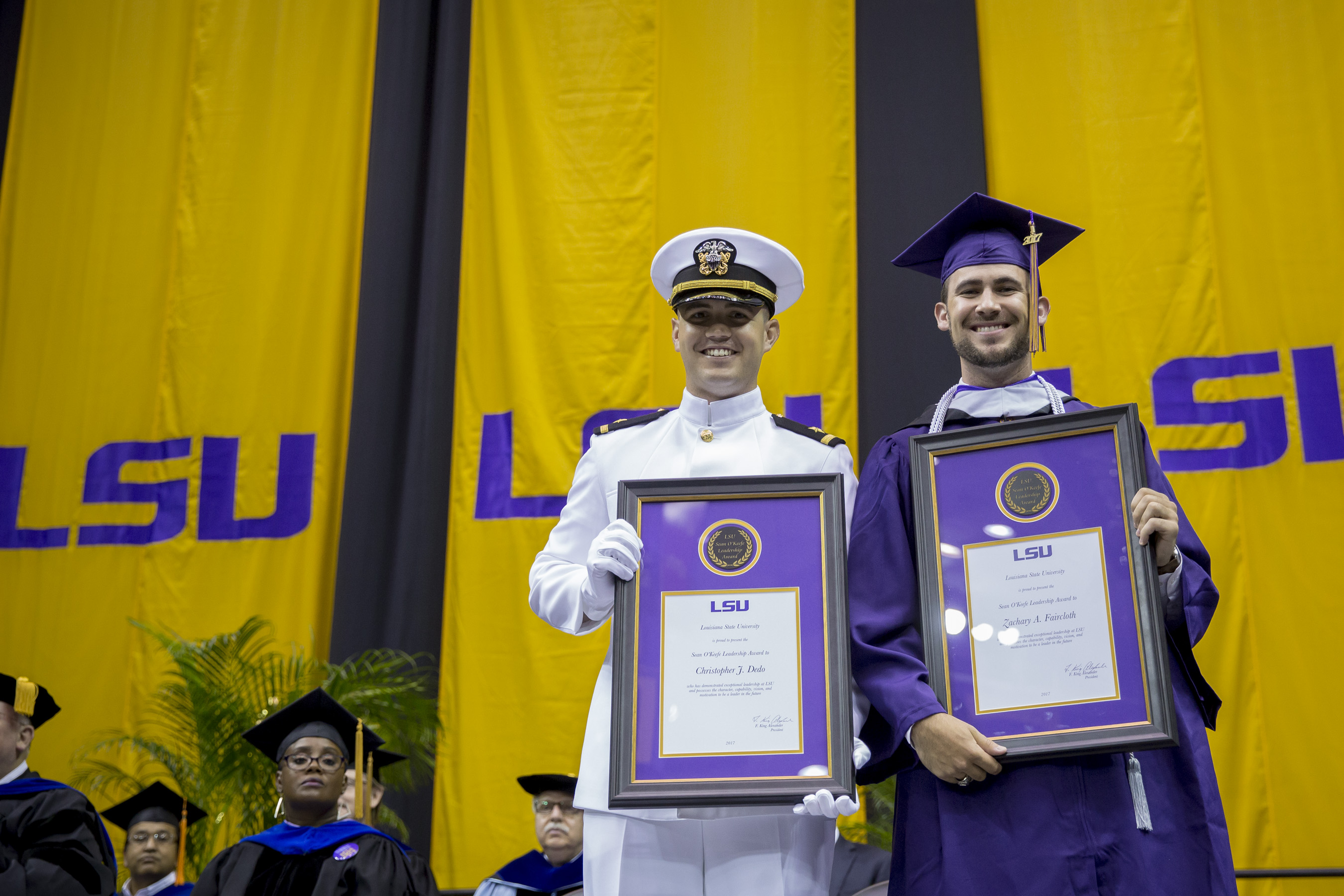 Graduates Christopher Dedo and Zachary Faircloth each received the Sean O'Keefe Leadership Award during the Collge of Engineering diploma ceremony on Friday, May 12.Photo: Eddy Perez/LSU

05/12/2017
BATON ROUGE – During the College of Engineering graduation ceremony on Friday, May 12, the Sean O’Keefe Leadership Award was presented to two graduates – Zachary Faircloth, an electrical engineering and political science major with a minor in Spanish from Pineville, La., and Christopher Dedo, an industrial engineering major with minors in business administration and technical sales from Lafayette, La.

“We are pleased to honor both Zack Faircloth and Christopher Dedo for the leadership they have shown at LSU,” LSU President F. King Alexander said. “It is a testament to them both that the award committee could not choose between the two of them and decided to present multiple awards this year.”

Faircloth is a graduate of Pineville High School. He served as the LSU Student Body president over the LSU main campus, the LSU AgCenter and the Paul M. Hebert Law Center and as the student representative on the LSU Board of Supervisors.

“It is truly humbling to receive such an honor,” Faircloth said. “I am thankful for the many mentors and friends who helped shape my LSU experience. I am blown away by the generosity of the Stephenson family to offer the Sean O’Keefe Award.”

Faircloth attended LSU as one of the university’s inaugural Penelope W. and E. Roe Stamps IV Leadership Scholars. He was also member of the Roger Hadfield Ogden Honors College. Following his freshman year, Faircloth helped to co-found the LSU Club Baseball team. He has served on the Engineers Without Borders team with whom he traveled to Honduras to serve underprivileged communities. Previously, Faircloth served as the president of Phi Gamma Delta and became a member of the Greek Leadership Institute.

During his time at LSU, Faircloth also studied at Universidad de Granada as part of the LSU and Spain program and studied in Greece as part of the Ogden Honors College’s Honors in the Aegean program. During the summers, he worked in Baton Rouge at ExxonMobil and in Washington, D.C., as a congressional intern.

In the fall, Faircloth plans on enrolling in law school at the SMU Dedman School of Law.

Dedo graduated from St. Thomas More Catholic High School in Lafayette. He served in a number of leadership roles in several organizations while at LSU, including Sigma Phi Epsilon, Naval Reserve Officer Training Corps, the Corps of Cadets and LSU Student Government.

“I owe this award to my family, friends and mentors who have supported me over the years and showed me what true servant leadership means,” Dedo said. “I am honored to even have been considered for such an award and am humbled by the donors’ generosity and support of LSU.”

This year, Dedo was a member of the inaugural class of the Senior Military Symposium with Cadets of the Ole War Skule. He was also the first to hold the position of assistant director of veteran and military student affairs on the Student Government Executive Staff and held multiple positions in Sigma Phi Epsilon, including president, vice president of membership development, philanthropy chairman and as a member of the risk management committee. This past summer, he was selected to attend the Tragos Quest to Greece by the national fraternity with 18 others from around the country to study ancient Greek culture in an intensive study abroad program.

During his time at LSU, Dedo was a member and treasurer of the Institute of Industrial and Systems Engineers and worked as a teaching assistant. As a member of the Tiger Chapter of Ducks Unlimited, he was the sophomore class representative. He participated in community outreach through Greek Leadership Institute, the Greek Board of Directors in partnership with Habitat for Humanity, and as a counselor and firearms instructor at Camp Alpine, a Christian boys’ camp near Birmingham, Ala.

Dedo was commissioned on Thursday, May 11, as an Ensign in the United States Navy. After graduating from LSU, Ensign Dedo will report to Naval Air Station Pensacola to begin naval aviation training as a pilot. Following his service, he plans to become an entrepreneur.

About Sean O’Keefe
O’Keefe is a longtime public administrator, national security expert and aerospace industry executive who has served in several top leadership positions in the U.S. government, higher education and industry.