BATON ROUGE – LSU Office of Research & Economic Development, or ORED, presents the Distinguished Research Master Awards to honor the exceptional research and scholarship of two LSU faculty each year. Rhetoric and Classical Studies Professor Michelle Zerba was presented with the award for the arts, humanities, social and behavioral sciences. Division of Electrical and Computer Engineering Professor and the Center for Computation & Technology, or CCT, Director J. “Ram” Ramanujam was presented the award for science, technology, engineering and mathematics this year.

In addition, the LSU Alumni Association and the Graduate School sponsor the Distinguished Dissertation Awards presented to two doctoral students whose research and writing demonstrate superior scholarship. Jacqueline Zimmer received the award in arts, humanities and social sciences for her dissertation on the relationship between social oppression, mythical notions of national identity and formulations of masculinity. Zimmer received her Ph.D. in comparative literature with a minor in philosophy. Kunlin Song from Sichuan Province, China, received the award in science, technology, engineering and mathematics for his doctoral dissertation that expands the application of biomass as an earth-abundant renewable natural resource. Kunlin received his Ph.D. in renewable natural resources.

“Congratulations to the Distinguished Research Masters and the Distinguished Dissertation awardees. Your work is vital to your respective fields and contributes to LSU’s rich and enduring legacy of creativity and excellence,” said LSU President F. King Alexander.

The Distinguished Research Master Awards and Distinguished Dissertation Awards were presented on April 26 at the Club at LSU Union Square.

“The scholars we are recognizing represent some of the best minds in their fields and in academia. We are proud to recognize their work that pushes the boundaries on how we see, think and feel about the world,” said Vice President of Research & Economic Development Kalliat T. Valsaraj. 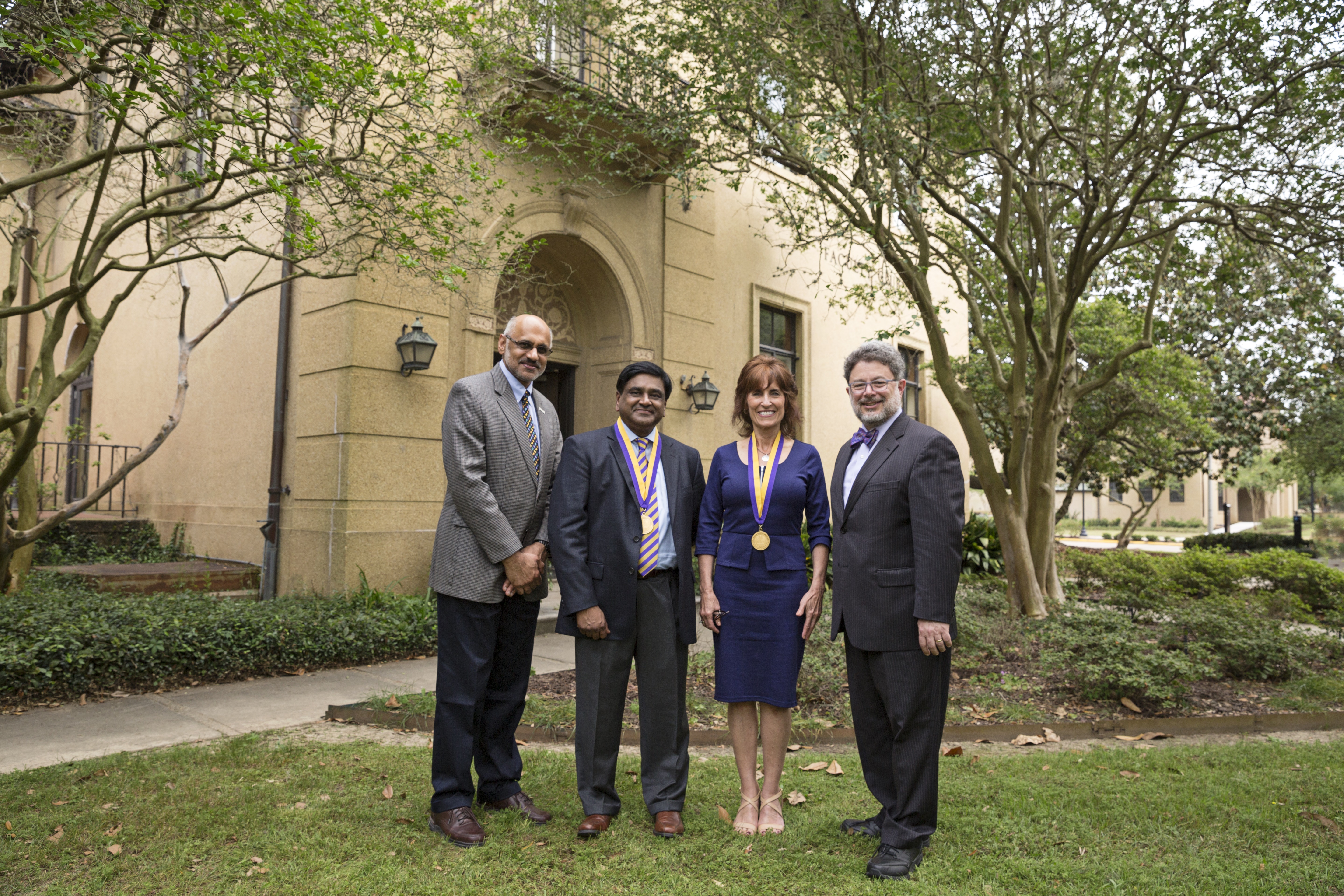 Michelle Zerba is the Maggie B. Martin Professor of Rhetoric and Classical Studies. She holds a split appointment in the Departments of English and Foreign Languages & Literatures. She also teaches regularly in the Comparative Literature program and at the Honors College, where she recently was awarded the Robert Amborski Outstanding Faculty Award. In 2013-2014, she held the Erich and Lea Sternberg Professorship in the Honors College, and in 2010-2011 she received an ATLAS grant. In addition, she has been the recipient of two Manship Grants, two Regents’ Research Grants and numerous international travel grants. In 2014, she was a distinguished Visiting Scholar at Columbia University at the Institute for Comparative Literature and Society. Most recently, in 2016-2017, she held a National Endowment for the Humanities fellowship at the American School of Classical Studies at Athens, where she is a senior associate member.

In addition to her many scholarly articles, she has published a book titled “Tragedy and Tragedy” with Princeton University Press. Her book, “Doubt and Skepticism in Antiquity and the Renaissance” was published by Cambridge University Press and was nominated by the press for two distinguished awards in the field of comparative literature. She is currently completing her work as editor of the Norton Critical Edition of Aristotle’s Poetics, which is forthcoming in fall 2017. Her recent essay titled “Renaissance Homer: Humanist Learning, the Visual Vernacular and the Socialization of Bodies” will appear in the prestigious journal Renaissance Quarterly this fall. She has a monograph-in-progress titled “Modern Odysseys: Reading Homer with C.P. Cavafy, Virginia Woolf and Aimé Césaire,” which has been solicited for publication by Oxford University Press for the Classical Presences series.

J. “Ram” Ramanujam is the director of the Center for Computation & Technology, or CCT, and holds the John E. and Beatrice L. Ritter Distinguished Professor in the Division of Electrical and Computer Engineering. He received his Ph.D. in computer science from Ohio State University. He joined the LSU faculty in 1990, held a joint faculty position in 2005 and served as the Systems Science and Engineering Focus Area lead in 2011. His research interests include compiler optimizations for high-performance computing, computational science, computer architecture, embedded systems and hardware synthesis and optimization. He received the National Science Foundation’s Young Investigator Award in 1994. In addition, he has received the best paper awards at the 2003 International Conference on High Performance Computing and the 2004 International Parallel and Distributed Processing Symposium for his work with others on compiler optimizations for quantum chemistry computations. 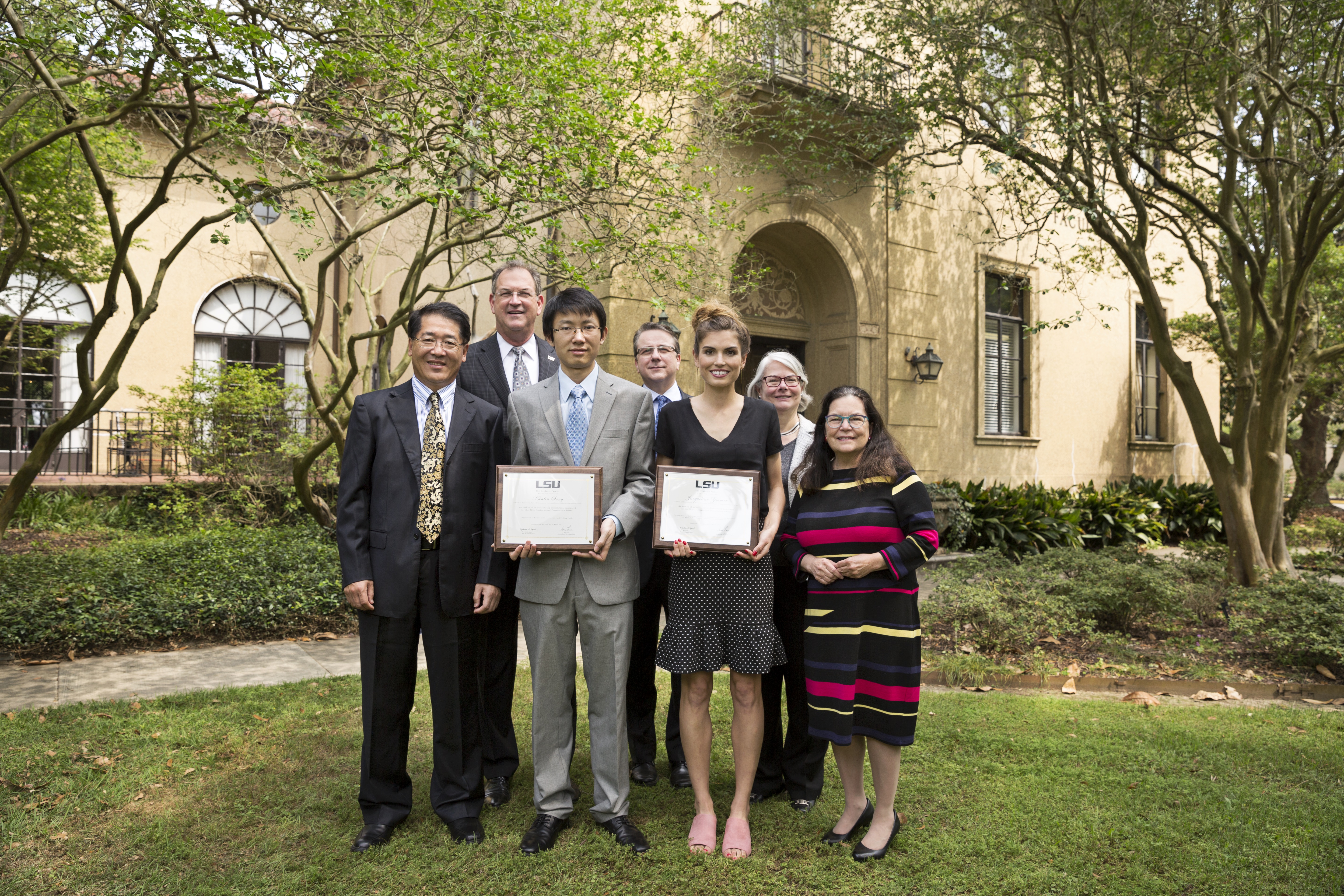 Jacqueline Zimmer - Josephine A. Roberts Alumni Association Distinguished Dissertation Award in Arts, Humanities & Social Sciences
Jacqueline Zimmer’s dissertation, “Re-examining and Redefining the Concepts of Community, Justice, and Masculinity in the Works of René Depestre, Carlos Fuentes and Ernest Gaines,” explores the relationship between social oppression, mythical notions of national identity and formulations of masculinity in Haiti, Mexico, and the American South. She examines how the authors’ representations of racial disharmony, marginalization and violence function as a critique of colonialism, the mythic multicultural American community and of “imperialist capitalist hegemonic patriarchy” to paraphrase bell hooks’s term.

By using a philosophical model of community to examine how the violence produced by masculine domination serves to distort the dynamics of community formation, she proposes that new formulations of masculinities that challenge patriarchal hegemonic masculinity may foster the development of the sort of community that can better resist totalitarian forces. An awards committee member described her dissertation as “a rigorous comparative examination of literary writings by brilliantly weaving together a sophisticated variety of texts from diverse disciplines: gender studies, political science and philosophy.”

Zimmer received her bachelor of arts degree in political science and philosophy with minors in studio art and French from Michigan State University and her master of arts in philosophy from LSU. She received her Ph.D. in comparative literature with a minor in philosophy from LSU in 2016, directed by Adelaide Russo. After graduation, she worked at the World Health Organization for The Global Fund to Fight AIDS, Tuberculosis and Malaria.

In addition, Song utilized cellulose nanoparticles, or CNPs, extracted from wood as an environmentally friendly and high performance additive in water-based bentonite drilling fluids. These “nanofluids” had lower solid contents and exhibited improved rheological properties, reduced fluid loss, less formation damage and more cost-effectiveness compared to traditional drilling fluids used today. An awards committee member commented on the impressive multidisciplinary nature of Song’s research, and noted that the work “should have a wide appeal to a variety of scientists, engineers and ecologists.”

Kunlin received his Ph.D. in renewable natural resources from LSU in 2016, directed by Qinglin Wu. He received a bachelor of science degree in wood science and engineering from Beijing Forestry University in 2009 and master of science degree in wood science and technology from the Chinese Academy of Forestry in 2012. Kunlin won a prestigious second place Wood Award given to the best graduate research papers by the Forest Products Society in 2015. He is currently working as a postdoctoral research associate at the University of Washington.