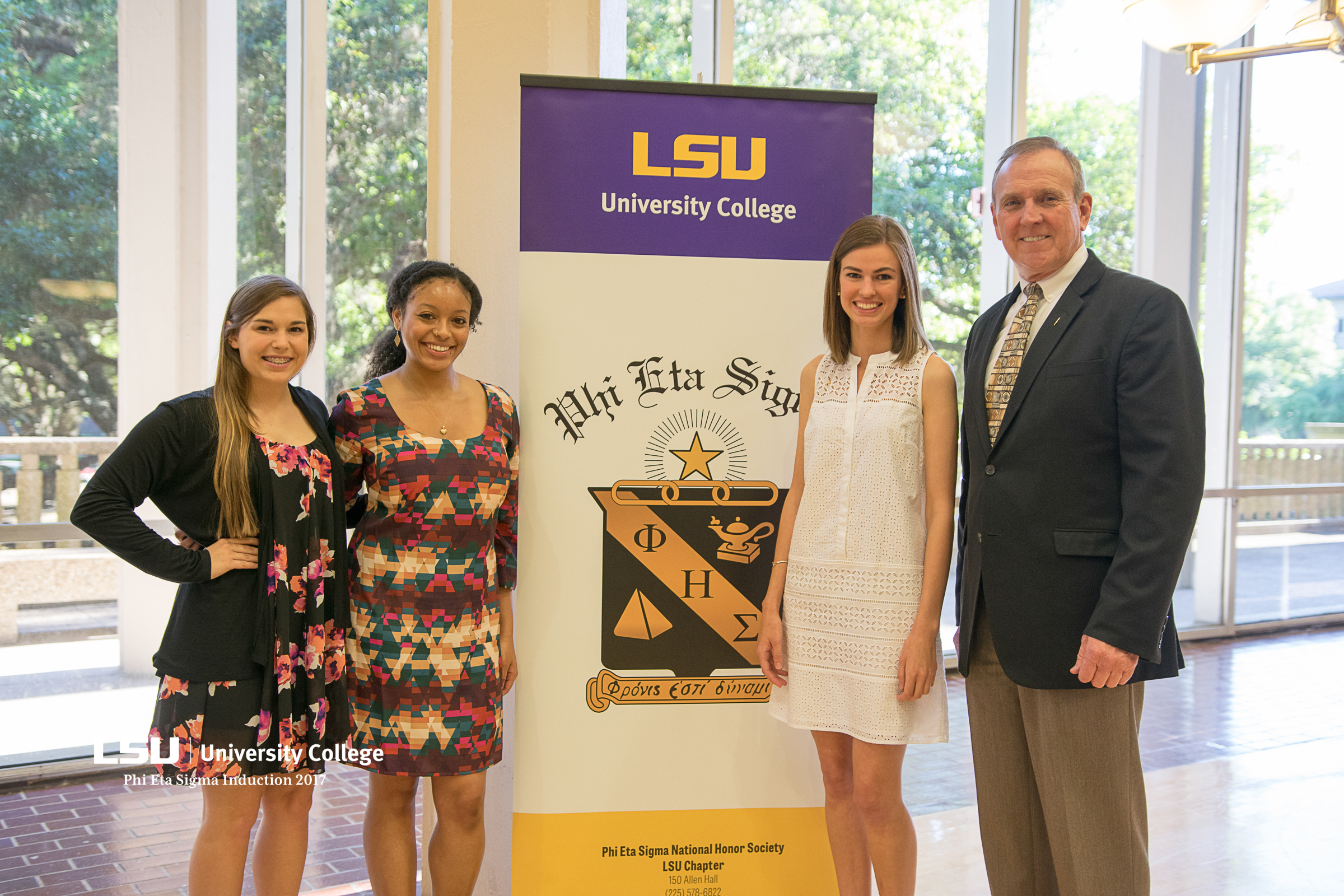 Phi Eta Sigma is a national honor society rewarding first-collegiate-year scholarship.  Since 1928, the LSU Chapter of Phi Eta Sigma has inducted more than 10,828 students. The goal of the society is to encourage and reward academic excellence among full-time, freshmen students in institutions of higher learning, who have a minimum 3.5 cumulative grade point average. Inductees receive national recognition, membership and undergraduate and graduate scholarship opportunities of over $300,000.

“Phi Eta Sigma is a well-respected honor society of which I am pleased to be the advisor for the LSU Chapter,” said R. Paul Ivey, executive director of LSU University College. “Our LSU chapter is one of several programs that University College integrates into our retention efforts as a means to recognize the academic excellence of our freshmen students.”

The oldest and largest first-year honor society, Phi Eta Sigma was founded at the University of Illinois on March 22, 1923. Since its founding, more than 1.1 million scholars have been inducted into Phi Eta Sigma, and more than 378 collegiate chapters have been established throughout the United States.

“Phi Eta Sigma is pleased to recognize our outstanding sophomore and graduating senior members for their academic achievement,” Ivey said. “These annual awards are an important part of our Spring Induction Ceremonies and hopefully provide our newest members with inspiration to continue their academic excellence.” 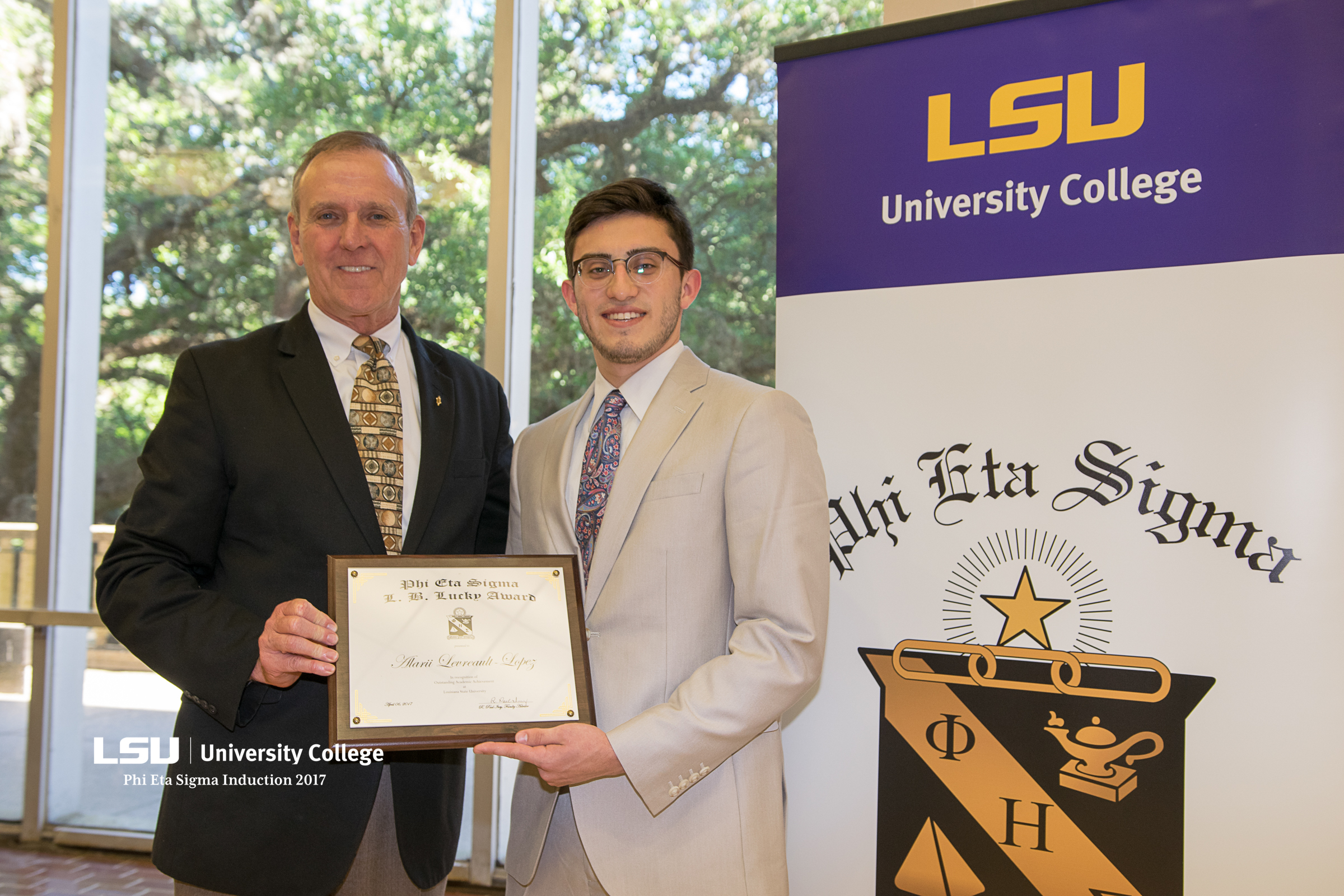 Established in 1959, the L.B. Lucky Award recognizes a Phi Eta Sigma member who achieved the best overall academic performance during the first three semesters of work taken at LSU.

Alarii Lopez received LSU University College’s Phi Eta Sigma L.B. Lucky Award. Lopez is pursuing his Bachelor of Science degree in petroleum engineering, while maintaining a perfect grade point average. He concluded his second season as an LSU varsity swimmer, and seeks to qualify for the Mexican National swimming team to compete at the world championships in Budapest. Lopez is the son of Netza Lopez (Oaxaca, Mexico) and Maria Levreault (Boston, Mass.).

“After visiting LSU, seeing the campus, experiencing a game, getting to speak with multiple engineering professors, and bonding incredibly well with the swimming team, LSU was the clear choice for me,” said Lopez. “I heavily considered which university could offer me the best combination of academics and athletics.” 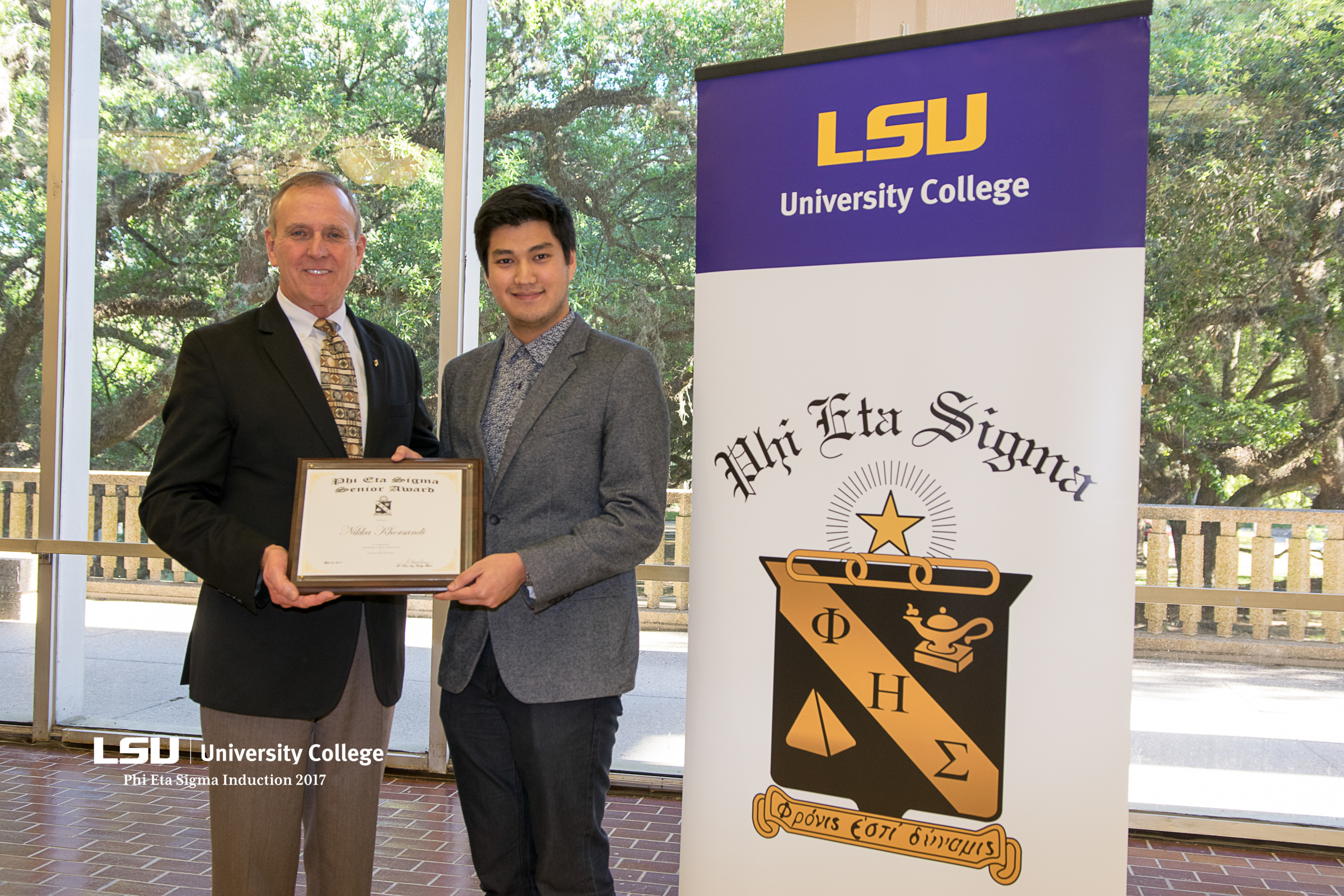 Established in 1992, the Senior Award recognizes a Phi Eta Sigma member who is a graduating LSU senior and has maintained the best cumulative grade point average and overall academic record at LSU.

Khorsandi is pursuing her Bachelor of Science degree in biological sciences with minors in business administration and leadership development. He is currently conducting research with Evanna Gleason in neurobiology with a focus on the retinal cell types of alligators and chickens with his research thesis titled, “Immunohistochemical Comparison of Retinal Cell Populations in an Aquatic Predator Species and a Terrestrial Prey Species that share a Common Evolutionary Ancestor.”

Khorsandi serves as president of Alpha Epsilon Delta Pre-Medical Honors Society, president of LSU’s National Society of Leadership and Success and special events director for Dance Marathon at LSU. Upon graduation, Khorsandi seeks to pursue a dual medical degree and Master of Public Health with a concentration in health policy and systems management at LSU Health Sciences Center in New Orleans.