BATON ROUGE – An experiment led by LSU Chemistry Professor John Pojman was aboard the historic flight by Blue Origin today. LSU was one of three universities, including Purdue University and Braunschweig University of Technology in Germany, selected to have an experiment aboard today's flight.

Blue Origin was established by Amazon CEO and founder Jeff Bezos with a bold vision to seed an enduring human presence in space. In November 2015, Blue Origin’s New Shepard rocket became the first to fly to space and return to Earth via vertical landing. Less than two months later, the very same rocket launched and landed again, demonstrating reuse – a key enabler to a future in which millions of people are living and working in space. This is the fourth flight of that same rocket.

LSU’s Pojman and his collaborators at William Jewell College in Liberty, Mo., designed and conducted an experiment that tests the physics of how fluids move between each other, a principle termed effective-interfacial-tension-induced convection, which is a type of flow at the interface between two fluids. It is well known that two separate miscible fluids, like oil and water, can experience fluid flow at their boundary when changes in temperature or gradients in their concentration are applied. However, it’s not clear whether a similar process occurs at the boundary of miscible fluids that dissolve into each other.

“There’s no way on Earth we could do this experiment because gravity interferes with fluid dynamics,” Pojman said. “It’s exciting to finally be able to test a theory that’s over 100 years old.” 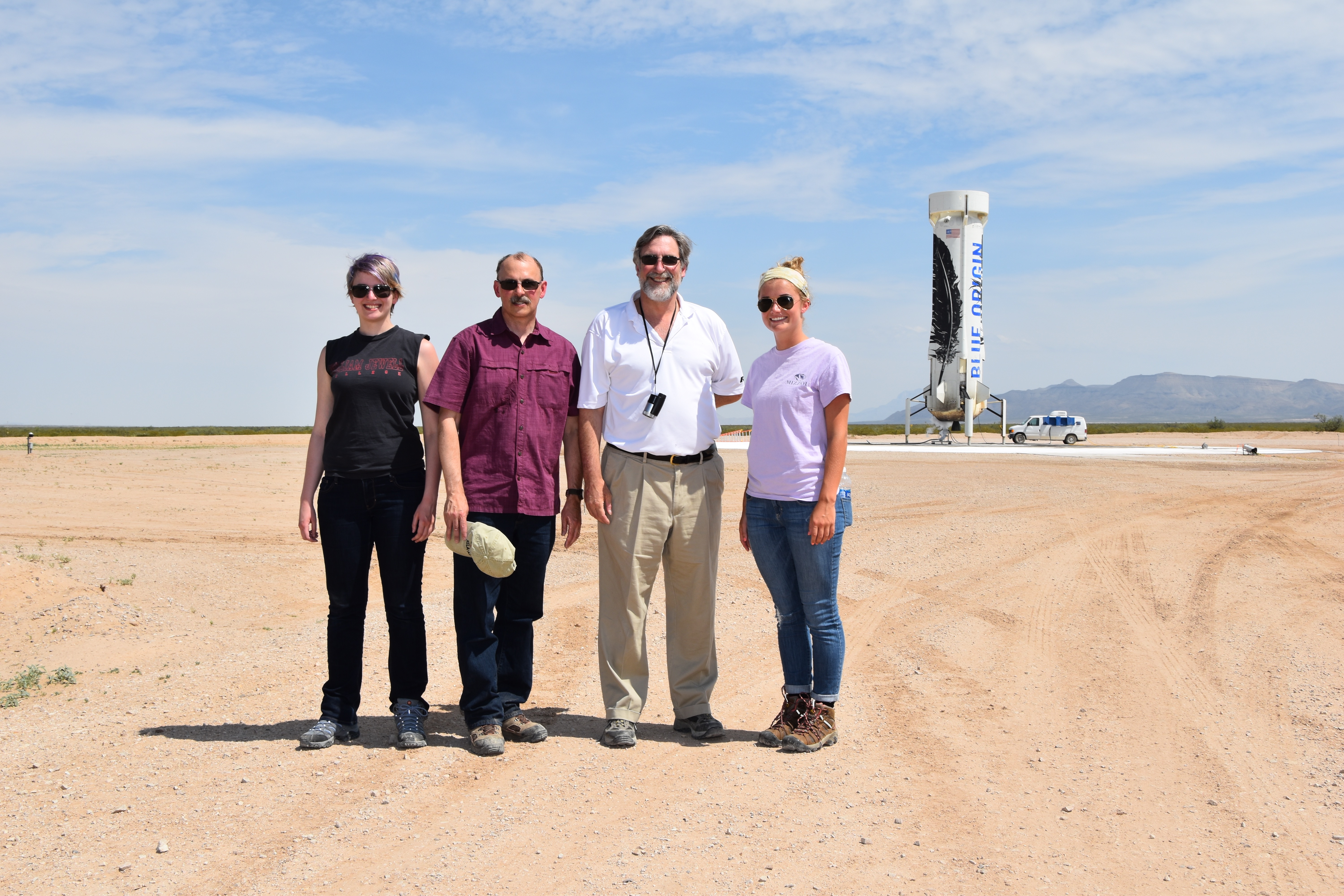 Researchers from William Jewell College and LSU were selected to have an experiment aboard the Blue Origin suborbital space flight on June 19. Researchers from left to right: Grace Bunton, Patrick Bunton, John Pojman and Erika Storvick. Photo Credit: Blue Origin

Pojman and his collaborators built a system that applies ultraviolet light to a reactive molecule, or a monomer, called dodecyl acrylate, which causes the monomer to convert into a viscous fluid. (The material and process is similar to how liquid dental fillings are hardened with light.) Tiny particles are dispersed throughout the monomer while a laser light illuminates them in a plane. A GoPro camera focused on the experiment records what happens over the three minutes of weightlessness. The experiment reveals how fluids with different compositions will move and interact when they come into contact with one another. The results of this experiment may reveal insights into the fluid dynamics of magma from volcanic lava flows as it moves over thousands of miles and how materials need to be processed in space.

“This has been a superb educational experience for my many talented undergraduates who worked very hard on the experiment over the past six years,” said William Jewell College Physics Professor Patrick Bunton.

This payload flew on-board Blue Origin’s New Shepard space vehicle. The New Shepard vertical takeoff and vertical landing vehicle is capable of carrying hundreds of pounds of payloads per flight and will ultimately carry six astronauts to altitudes beyond 100 kilometers, the internationally-recognized boundary of space. This payload was part of Blue Origin’s Pathfinder Payloads program, demonstrating the integration and operation of scientific experiments during untended test flights of the New Shepard system to high altitudes.

“This is also exciting because this experiment combines my love of space and astronomy with chemistry,” Pojman said.

Pojman has conducted chemistry and fluid dynamics experiments for NASA previously on the International Space Station.