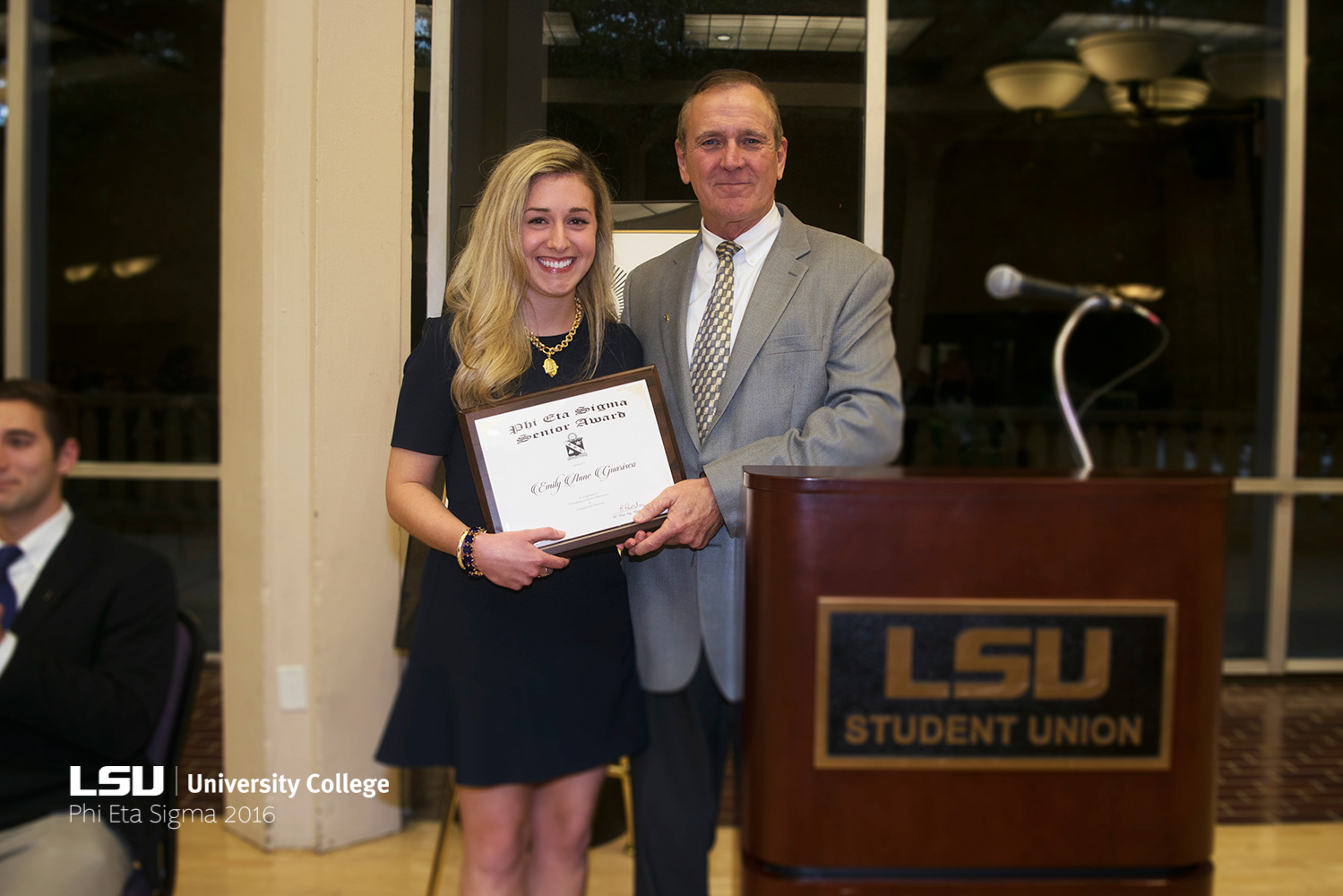 Phi Eta Sigma is a national honor society rewarding first-collegiate-year scholarship.  Since 1928, the LSU Chapter of Phi Eta Sigma has inducted more than 10,828 students.  The goal of the society is to encourage and reward academic excellence among full-time, freshmen students in institutions of higher learning, who have a minimum 3.5 cumulative grade point average.  Inductees receive national recognition, membership, and undergraduate and graduate scholarship opportunities of over $300,000.

“Phi Eta Sigma is a well-respected honor society of which I am pleased to be the advisor for the LSU Chapter,” said R. Paul Ivey, executive director of LSU University College. “Our LSU chapter is one of several programs that University College integrates into our retention efforts as a means to recognize the academic excellence of our freshmen students.”

The oldest and largest first-year honor society, Phi Eta Sigma was founded at the University of Illinois on March 22, 1923. Since its founding, more than 1,100,000 scholars have been inducted into Phi Eta Sigma, and more than 378 collegiate chapters have been established throughout the United States.

“Phi Eta Sigma is pleased to recognize our outstanding sophomore and graduating senior members for their academic achievement,” Ivey said.  “These annual awards are an important part of our Spring Induction Ceremonies and hopefully provide our newest members with inspiration to continue their academic excellence.”

Established in 1959, the L.B. Lucky Award recognizes a Phi Eta Sigma member who achieved the best overall academic performance during the first three semesters of work taken at LSU.

Senior Award
Guarisco, who is graduating with a Bachelor of Science degree in biology, received LSU University College’s Phi Eta Sigma Senior Award.  She has earned the President’s Honor Roll for every semester while at LSU.  She is a member of Pre-Dental Society, National Society of Collegiate Scholars, Alpha Lambda Delta and Chi Omega sorority, which she currently serves as vice president and formerly as director of community service.

Guarisco has participated in numerous service opportunities, including a two-week mission trip to Honduras and volunteering at the LA Mission of Mercy, providing free dental services in the clinic. She has done extensive research with the Department of Horticulture and written a scientific paper, which was published in LSU’s Horticulture Journal. Upon graduation in May 2016, Guarisco will be attending LSU School of Dentistry in New Orleans.

Established in 1992, the Senior Award recognizes a Phi Eta Sigma member who is a graduating LSU senior and has maintained the best cumulative grade point average and overall academic record at LSU.

Photos of all attending inductees can be accessed at www.lsu.edu/universitycollege/phietasigma.